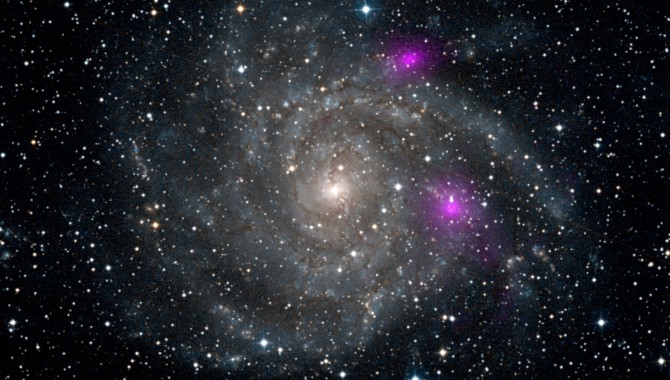 NASA’s Nuclear Spectroscopic Telescope Array, or NuSTAR, caught the glow of two black holes lurking inside spiral galaxy IC342, which lies 7 million light-years away in the constellation Camelopardalis (the Giraffe). Previous observations of this galaxy from the Chandra X-ray Observatory revealed the presence of these black holes, called ultraluminous X-ray sources (ULXs).

How ULXs can shine so brilliantly is an ongoing mystery in astronomy. “High-energy X-rays hold a key to unlocking the mystery surrounding these objects,” said Fiona Harrison, NuSTAR principal investigator. “Whether they are massive black holes, or there is new physics in how they feed, the answer is going to be fascinating.”

Read more about the new image and what it reveals at www.nasa.gov/mission_pages/nustar/news/nustar20130107.html.

After a successful event in 2012 that resulted in dozens of innovative solutions, the International Space Apps Challenge is gearing up for its second event April 20–21, 2013. The International Space Apps Challenge is a two-day technology development event during which citizens from around the world work together to address current challenges relevant to both space exploration and social need. To learn more about the event, and register to participate, visit spaceappschallenge.org.

NASA takes a look back on the many accomplishments of 2012 in an interactive feature showcasing images, articles, and video from the year. Experience again the “seven minutes of terror” when the Curiosity rover landed on Mars, the Space Shuttle’s retirement, advancements in commercial space partnerships, new scientific discoveries, and more at www.nasa.gov/externalflash/YIR12. Also watch as those behind these achievements reflect on them and what it took to succeed: www.nasa.gov/multimedia/videogallery/index.html?media_id=157200021.