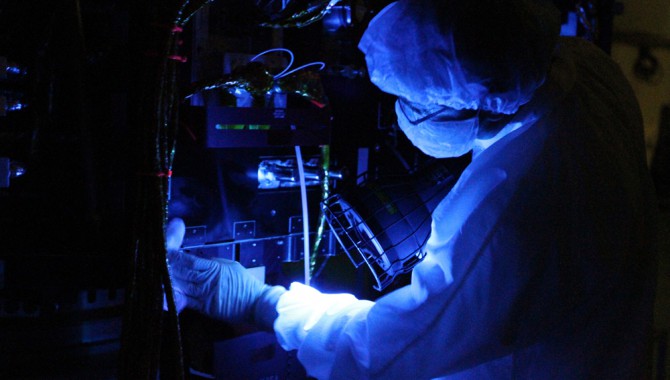 Radiation is one of many hazards in space exploration. It causes electronics to fail, degrades sensitive instrumentation, and affects astronaut safety—just a few of the things NASA protects against when launching missions to space. And our planet is surrounded by radiation, most notably the Van Allen belts. To help us better understand the generation, intensity, and variability of the radiation belts and how they and Earth are affected by space weather, the Radiation Belt Storm Probes—renamed the Van Allen Probes—were launched in August 2012. 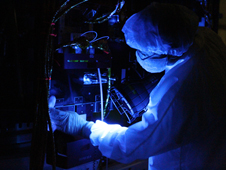 The term “space weather” might conjure up ideas about asteroid hail or gale-force winds, but the winds in space are different from those we experience on Earth. The gases that blow are ionized, and their bluster affects our planet in strange—and magnetic—ways, such as disrupting satellite communications. When space weather intensifies, populations of charged particles trapped in the radiation belts also intensify, becoming swirling clouds that react in unpredictable and surprising ways. But how much do these changes affect our space technologies and astronauts? And how do the changes occur?

To answer that latter question in particular, two probes are needed. This allows the mission to not only measure how much radiation increases during a space-weather event, but how long it takes for us to feel the effects, and whether the effects are from one event moving through the belts or from different events altogether.

Nicky Fox, deputy project scientist, explained the logic behind this strategy in a NASA feature about the probes: “If you imagine having two buoys in the ocean, and one goes up, and comes down again, you don’t know anything about what caused that to go up and down. If both of them go up, then you know you’ve got a very big feature that is affecting both of them at the same time. If one goes up, then the other goes up, you can measure how fast that wave has traveled between them, and what direction it’s going in. And if only one goes up and comes down again, then you’ve got a very, very localized feature that didn’t travel anywhere. 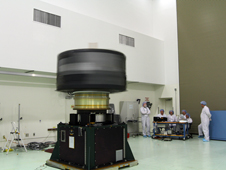 Inside the Astrotech payload processing facility, technicians monitor progress as Van Allen Probe A undergoes a spin test, where the spacecraft is turned at a rate of 55 rpm to ensure it is properly balanced.
Photo Credit: NASA/Charisse Nahser

“So in order to be able to really understand what is going on [with] these very fine-scale features in our radiation belts, we have two spacecraft to do that,” she said.

And both probes have to survive these intensified waves of radiation multiple times.

“Radiation is bad for electronics,” Jim Stratton, mission systems engineer, explained as part of an educational video series on the mission’s Applied Physics Laboratory (APL) site. “If you just flew your computer through the radiation belt, it really wouldn’t work. It would damage the hard drives. The processor would constantly reboot itself.”

Since the Van Allen Probes have to safely transmit data about big radiation events, the team took extra precaution to ensure such failures wouldn’t affect the spacecraft. Andy Santo, deputy project manager, explained some of the precautions the team took to protect the sensitive instruments. “For example we covered each solar panel with a thin slab of glass to protect from the radiation,” he said. “The electronics are very susceptible to radiation, so we put a slab of aluminum over the very sensitive pieces.”

Adding these protective measures also adds mass, which can affect any project’s budget, either through the direct cost of materials or by requiring a larger launch vehicle to lift the heavier spacecraft. Many space missions are overdesigned in this way to ensure spacecraft can survive large radiation events without failing. Engineers hope the Van Allen Probes will tell them if they’re overdesigning too much.

“Often people just have to overdesign because they don’t know what the radiation is really like, so you just have to take the worst thing you think you’re going to have. Sometimes you don’t predict that enough, and you get a big storm and it kills the spacecraft. Other times you overdesign, you have more mass than you really needed, and you could have saved money by producing a simpler spacecraft,” said Fox. The data from the Van Allen Probes will help the mission team improve models of the radiation environment in low-Earth orbit, so future missions will have a better idea of what the environment is like and can design their spacecraft with more accuracy.

The data from the Van Allen Probes will help the mission team improve models of the radiation environment in low-Earth orbit, so future missions will have a better idea of what the environment is like and can design their spacecraft with more accuracy.

In addition to these radiation models, the team plans to create physics-based models to help forecasters predict space-weather events and warn astronauts and spacecraft operators about impending hazards.

Building two of everything can be a blessing and a curse. In the case of the Mars Exploration Rovers, it allowed the team to halve the testing time, putting one rover through one set of tests and the second rover through another. But building two spacecraft can also add time, as well as money and mass. With extra mass to shield electronics from radiation already required for the Van Allen Probes, keeping overall mass in check was vital. Especially since both spacecraft would launch on the same vehicle. 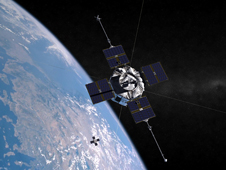 The identical Van Allen Probes will follow similar orbits that will take them through both the inner and outer radiation belts. The highly elliptical orbits range from a minimum altitude of approximately 373 miles to a maximum of approximately 23,000 miles.
Image Credit: NASA/Johns Hopkins University Applied Physics Laboratory

Maneuvering both spacecraft in their respective orbits is further complicated by the boom system implemented on both probes. To decrease the risk of interference from on-board electronics, some science measurements will be taken by instruments located at the end of long booms, some 164 feet away from the body of the spacecraft. Because of these booms, rotating each spacecraft has to be done slowly and accurately to avoid any changes in trajectory.

“When you have long wire booms, it tends to make it a very stiff system. When I say stiff, it’s like a spinning top where once it’s spinning, it doesn’t want to change its orientation,” Santo explained. “So for us to change the orientation of a system with these long booms takes a lot of time and very small pulses because we don’t want the system to react in a way we can’t predict.” Since the fully deployed wire-boom configuration could not be fully tested on the ground, pre-flight verification of performance required a tremendous amount of sophisticated analyses of the dynamics of the system.

For any mission to succeed, the spacecraft must survive the vibration of launch and the environment of space. To ensure this, engineers put the hardware through a series of tests—what they refer to as “shake and bake.”

In the past, APL has had to transport spacecraft to other facilities for the vibration-testing portion of the shake and bake. This not only adds time to the development schedule, as the team has to wait for hardware to travel to the testing facility,but also cost. Transporting hardware also increases risk that something might be damaged in transit. To address these problems, APL set out to create a new test that would enable them to shake the Van Allen Probes on site.

Many vibration tests are done using acoustics in a reverberant chamber: sound is blasted at the walls and the sound waves bounce back onto the spacecraft to set it shaking. Because these chambers tend to be large and specialized, and APL wanted to keep the testing in house, the team began to explore direct-field acoustic testing. Essentially, they would turn the speakers around. 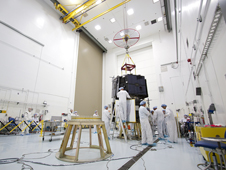 Near Kennedy Space Center, technicians inside the Astrotech payload processing facility use a crane to position the Van Allen Probes spacecraft A for stacking atop spacecraft B.
Photo Credit: NASA/Jim Grossmann

“Since it’s somewhat of a new test method, we had to first qualify it to make sure it was satisfactory to our analysts, to our sponsor, and at the same time make sure that our facilities could support it,” said Navid. “What it does essentially is uses speakers and sub-woofers to simulate the sound field within the launch
vehicle’s fairing.”

And that sound field is very loud, even outside the ring of speakers. So loud, the team had to make sure not only their hardware would be safe, but their facilities would be, too.

“We made sure that the overhead lights and things that are in the ceiling are covered up, that there’s extra screws, and we have netting in place,” said Ken Turner, lead vibration test engineer. “And after each test run we go out and inspect our facility.”

Once they confirmed the facility could handle direct-field acoustic testing, the team had to convince everyone involved that the hardware would survive as well. Gordon Maahs, senior structural engineer, explained that this took a lot of coordination to achieve: “We had sound technicians come in. We worked with the facilitators from the Vibration Lab. We had to talk to scientists that had instruments on the test. And we had to give everyone a basic understanding of just how the test works. It took months of work, but it was great to work with all these different people in different fields to get it to come together.” 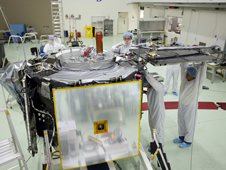 Technicians attach a solar array with its associated science boom to Van Allen Probe B at the Astrotech facility.
Photo Credit: NASA/Kim Shiflett

But before any actual hardware entered the ring of speakers, mechanical engineer Simmie Berman explained that they first created a mockup to undergo the testing. Loaded with sensors to obtain measurements, it allowed the team to ensure this new way of testing wouldn’t harm their spacecraft. “The mockup is just a four-sided aluminum structure made of honeycomb and 8020, which is like Legos for big kids,” she said. “It’s the approximate height and width of the actual [probe] structure. On the spacecraft itself we taped I think fifty-nine accelerometers on different locations all over to collect data.”

Facilities and mockups tested, APL was ready to expose the Van Allen Probes to the 143 decibels inside the ring of speakers. The sound was so loud, the team had to shut off the speakers after twenty seconds to allow them to cool down for an hour, according to Maahs. “Just imagine standing in front of a rock concert speaker a foot away at full blast,” he said. The sound is about twice as loud as the actual launch, so if the probes survived the speakers, the team was positive they would survive the launch.

Which they did on August 30, 2012, when the Van Allen Probes successfully launched on their two-year mission as part of NASA’s Living with a Star program. So far, they have revealed the sounds of “chorus” radio waves emitted by particles in Earth’s magnetosphere and captured energetic events that reveal the sun’s influence on space weather is even greater than scientists had thought. This information, and what the probes reveal over the next two years, will help keep future missions and astronauts safer from the effects of our turbulent Van Allen radiation belts.

Interviews were originally conducted by APL and can be found at
vanallenprobes.jhuapl.edu/mission/conversation/overview/index.php.