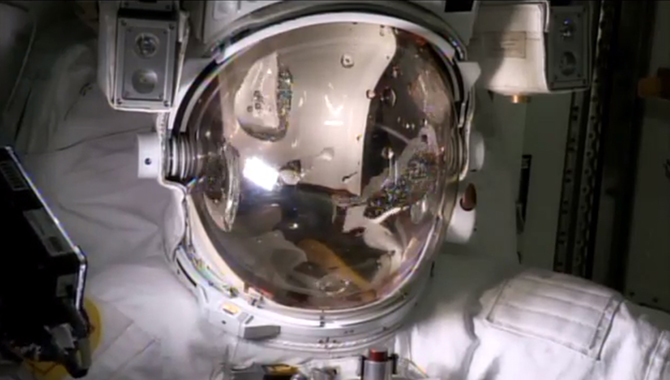 The investigation into a close call with a spacesuit anomaly from last July provides lessons about spaceflight safety, design, and operations.

On February 26, 2014, International Space Station (ISS) Program leaders convened at a NASA press conference to discuss the findings and recommendations from a recent Mishap Investigation Board (MIB) report about a spacesuit water intrusion event that occurred during a spacewalk last summer.

On July 9, 2013, two American astronauts successfully completed Extravehicular Activity (EVA) 22 of Expedition 36. After safely returning to the US airlock, it was discovered that crewmember Luca Parmitano had approximately 0.5 to 1 liter of water inside of his spacesuit helmet. Unnoticed prior to the crew’s reentry to the airlock, the ISS team concluded that the water originated from a leak in the drink bag attached to Parmitano’s chest, which he likely squeezed as he leaned forward inside the airlock.

One week later, during EVA 23, Parmitano reported water inside of his helmet and behind his head. Unable to locate the water source, the spacewalk continued until the water had reached Parmitano’s face, making it difficult for him to see and breathe. The spacewalk was terminated and Parmitano and his crewmate, Chris Cassidy, returned to the airlock. Inside, their inspection of Parminato’s suit indicated an estimated that 1 to 1.5 liters of water had leaked into his helmet.

Due to the critical nature of the incident, which could have resulted in Parmitano’s asphyxiation, the ISS Program called for an investigation. In their report, the MIB and identified the causes for the mishap had evolved from:

The MIB discovered that the water leak was due to a contamination and blockage inside of Parmitano’s spacesuit and not the drink bag. While the MIB’s investigation of the hardware is still ongoing, the ISS Program released their initial findings and recommendations pertaining to the factors that led to the mishap in an effort to prevent similar incidents from occurring in the future. “It’s a very complicated problem,” said Chris Hansen, ISS Chief Engineer and MIB Chairman. ”It will take us time to work through.”

While the investigation into actual cause of the mechanical failure continues, ISS Program leaders encouraged everyone to read through the report and learn from the MIB’s findings and recommendations.

“It really makes us step back and think and challenge ourselves as a team to get better,” said Bill Gerstenmaier, Associate Administrator for NASA’s Human Exploration Operations Mission Directorate. “We’re going to learn from this event and make sure that we’re safer in the future.”

Listen to the NASA press conference and view the presentation.

Water fills the empty spacesuit helmet of Italian astronaut Luca Parmitano in an Aug. 27, 2013 test of the faulty spacewalking gear which forced NASA to abort a July 16 spacewalk for safety reasons. The water leak confirmation will help NASA engineers devise repair methods for the spacesuit.