Back to Top
Home/APPEL News/APPEL News Digest/This Month in NASA History: Winglets Helped Save an Industry 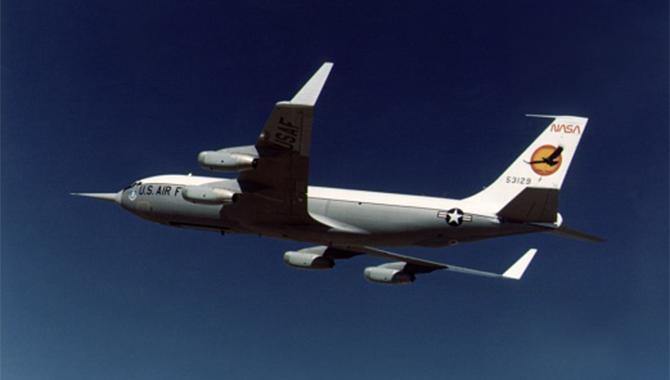 The idea of adding vertical plates at the end of an aircraft’s wings to increase efficiency had been explored before. But Whitcomb believed that plates alone would not sufficiently reduce drag or enhance fuel performance. Instead, he designed what he called “winglets”: vertical wing extensions engineered with as much care and precision as an aircraft’s wing. His design inspiration came, in part, from studying the ways in which birds in flight curled their wingtip feathers upward when seeking greater lift. The resulting winglets featured an airfoil shape similar to that of an aircraft wing, but in miniature.

Even before turning his attention to winglets, Whitcomb had revolutionized jet aircraft design. In the early 1950s, he came up with the transonic area rule: a fuselage design that increased the speed of supersonic planes without a need for enhanced engine power. In the 1960s, he created the supercritical airfoil: a unique blunt-edged wing design that delayed drag and increased fuel efficiency. Whitcomb’s work on winglets was equally innovative and impactful. When his research was published in 1976, Whitcomb proposed that winglets would produce a 20% reduction in induced drag. Subsequent testing proved him right.

Whitcomb designed winglets to decrease drag at the tips of an aircraft’s wings and, to a degree, convert it into thrust. Induced drag is a product of differing pressures on the upper and lower surfaces of the wing that produce a twister, or whirlpool, of air off the wingtip. This twister spirals back behind the plane, resulting in a notable energy loss. Winglets reduce that energy loss by stemming airflow down the wing and decreasing the wingtip tornadoes. In addition, as the spiral of air strikes the winglet, some of its force is converted into thrust.

As a result, winglets trick an aircraft’s wings into acting as though they were longer. Longer wingspans are more efficient: they offer aircraft the ability to fly longer ranges at cruising speeds. However, longer wings require greater stabilization, which increases weight, adding to fuel costs. Winglets increase range by reducing drag without adding significant weight. This, in turn, reduces fuel consumption.

On July 24, 1979, the first winglet test flight took off from NASA Dryden Flight Research Center. The test program was a joint effort between NASA and the Air Force, which supplied the KC-135 Stratotanker jet aircraft that were modified with winglets. While Whitcomb specified the design, a number of different angles for positioning the winglets were explored. This was important because the angle at which winglets are attached to the wing—called the cant (upward) and incidence (inward or outward) angles—are critical for optimal performance. Tests at Dryden determined that the best configuration for the KC-135 jets was a 15-degree cant and a minus 4-degree incidence angle. However, the ideal angle differs for every aircraft because the whirlpool of air that swirls off the wingtip is unique for each plane.

Over the course of 48 test flights, winglets were proven to reduce wingtip drag, increasing fuel efficiency by 6-7%. Winglets continue to be relied on today by commercial and other airlines for enhanced fuel performance.