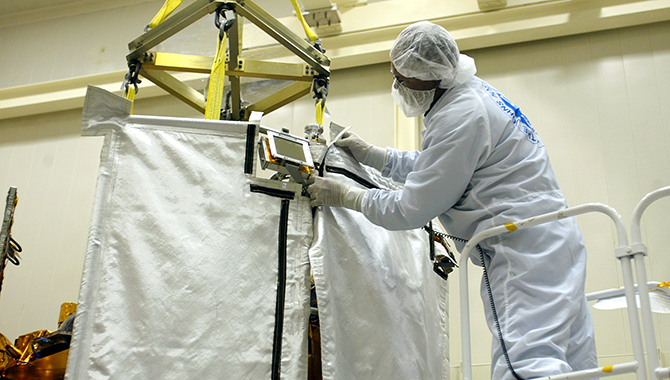 The middle section of the ceramic-cloth sunshade is being attached to MESSENGER.

Ten years ago this month, MESSENGER embarked on a mission to uncover the secrets of the least-explored terrestrial planet.

Close-range observation of Mercury actually began 40 years ago, when—in 1974 and 1975—Mariner 10 flew by Mercury three times, returning novel images of the mysterious small planet. Valuable though those images were, Mariner 10’s view was restricted to less than 50% of Mercury’s surface. It wasn’t for another 30 years—until MErcury Surface, Space ENvironment, GEochemistery, and Ranging (MESSENGER) launched on August 3, 2004—that a more comprehensive study of the planet became possible.

Getting MESSENGER to Mercury was not simple. The initial challenge came down to dollars and cents: sending a spacecraft into orbit around Mercury would be cost prohibitive in terms of the fuel alone. But mission scientists determined that a unique trajectory could allow a spacecraft to enter orbit around Mercury using minimal fuel by utilizing gravitational assists provided by flybys of Earth, Venus, and Mercury itself. These flybys would provide trajectory corrections to position the spacecraft appropriately and decrease its velocity. Without the gravitational assists, MESSENGER would travel past Mercury too quickly to enter its orbit without relying on large amounts of fuel to slow down. Ultimately, MESSENGER followed a 7.9 billion-kilometer trajectory that included a flyby of Earth, two flybys of Venus, and three of Mercury before successfully entering the planet’s orbit in March of 2011.

Even with a trajectory that decreased the amount of fuel required for the mission, more than half of the spacecraft’s launch weight consisted of propellant. To compensate for this weight, the spacecraft was designed to be as light as possible. It was constructed from a lightweight composite material that had never been used to form an entire spacecraft structure before, and its electronics were miniaturized to further decrease weight. But many of MESSENGER’s other components were standard, which helped contain costs.

Fuel costs and weight were not the mission’s only obstacles. MESSENGER also had to deal with the extreme heat associated with an orbit around the planet closest to the sun. For protection, MESSENGER utilizes a ceramic-cloth sunshade as well as blanketing designed to keep the spacecraft and its instruments cool. In addition, two-thirds of the spacecraft’s solar arrays are mirrors that reflect nearly 70% of the solar energy the craft encounters. These thermo-protective measures ensure MESSENGER’s instruments stay at about room temperature.

MESSENGER’s original mission was to investigate six key unknowns about Mercury. The resulting data would also help inform understanding of all of the terrestrial planets, including Earth. Five of the investigative areas addressed Mercury’s density, geologic history, magnetic field, core structure, and exosphere. The sixth targeted the mysterious material at its poles.

Long before MESSENGER reached the small planet, Earth-based radar observations identified a highly reflective material in some of the craters near Mercury’s poles. The most likely explanation was that the craters contained ice. But scientists were not fully convinced. Many of Mercury’s characteristics—its temperature, which on the sun-facing side can exceed 400 degrees Celsius, thin atmosphere, and very low gravity—suggested that ice could not persist on the planet. Yet in 2012 MESSENGER provided evidence of water ice on Mercury. Because the planet barely tilts on its axis—less than 1 degree—the sun never gets high enough in the sky to adequately heat the poles. As a result, the crater floors remain cold enough for ice to develop and endure.

MESSENGER entered Mercury’s orbit on March 18, 2011. Over the course of its initial mission, MESSENGER sent home nearly 100,000 images. By March of 2013, near the end of its first extended mission, MESSENGER had successfully mapped the entire planet. The mission was then extended a second time to provide low-altitude imaging that offers unprecedented detail of specific regions of the planet. In March of 2015, MESSENGER is expected to exhaust its fuel supply and impact the surface of Mercury. It will leave behind a legacy of novel information concerning Mercury along with a deeper understanding of the terrestrial planets overall.