Back to Top
Home/CKO News/White Papers, Black Holes, and Lessons Learned: A Masters with Masters Interview with Bart Singer and Jennifer Stevens 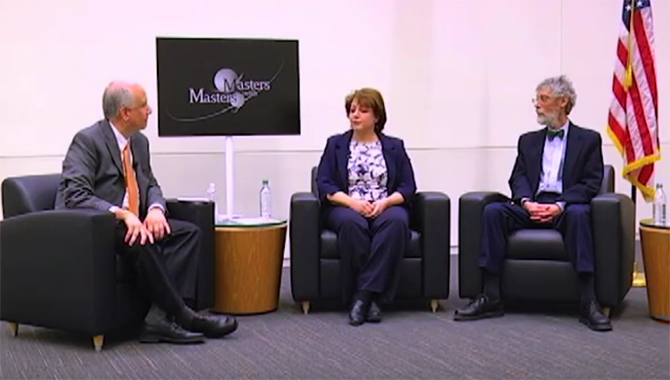 On a snowy day in February 2015, Bart Singer, Senior Systems Engineer for the Langley Research Center in the Office of the Chief Engineer, and Jennifer Stevens, Chief Knowledge Integrator of the Marshall Space Flight Center, spoke with Hoffman on a variety of topics related to sharing knowledge and Lessons Learned at their individual centers and across NASA.

Hoffman noted that both interviewees had long-time passions for engineering that helped position them for becoming excellent knowledge practitioners.

“Ever since I was a kid,” Singer began, “I was interested in things that fly.” He first came to Langley Research Center as a contractor performing research in aeroacoustics, and then he was hired as a civil servant. “No one who knew me (as a child),” continued Singer, “would be surprised that I am here doing aeronautics and space flight work.”

Stevens’ father was a big fan of space flight, and held out the hope that his daughter would some day become an astronaut. “I was the kid that got car sick on vacation,” admits Stevens, “I was not going to be an astronaut.” However she, as did her friends, liked science and math. “I grew up in an area where girls were not necessarily actively discouraged from going into engineering. They weren’t encouraged… I just did whatever I really wanted to do.”

Hoffman observed that it was their attention to detail that began during their training and then their careers as engineers, coupled later with their acumen in the management of projects, which helped them be successful and allowed those working with them to be successful.

“Often times,” Hoffman added, “what I see is that folks who are working in knowledge activities, see themselves in the learning community, and folks working projects are in that community.” Hoffman summarized, “I think the key thing, which I hear from both of you, is success has to happen from that interchange.”

Stevens followed up that all of Marshall is involved in that interchange. “It’s not just an engineering focus or a safety focus. It’s an institutional focus.” Stevens shared that the leads of all major organizations are involved in Lessons Learned in a formal capacity at Marshall. “The (Lessons Learned) Distilling Team has members of all those organizations that are empowered to take these lessons.” She explained that the Distilling Team does the groundwork about where a particular lesson learned should be infused across the operations—in training, policy, manuals or processes—and then feeds that information up to the Lessons Learned committee. “You have an institutional group that’s talking across,” Stevens says, “you have our group that’s talking across institutionally, and then we’re communicating vertically.”

Singer pointed out the need for improved feedback on lessons that make a difference. “I think there are a lot of people at NASA that would be far more motivated to enter good lessons if they had some feedback that somebody entered something and knew that it actually impacted another project.”

Stevens noted that her team has sometimes come across lessons that have been implemented in policy, “That’s encouraging… they did learn their lessons back in the day or in the past three years… and they’ve changed the policy.”

Hoffman surmised, “From a vantage point of what I’ve seen at the agency, I think NASA, on a whole, does learn.”

Part of what all of NASA is now trying to do in earnest is to capture and transfer what is exactly the critical knowledge to NASA: how to have that become part of NASA workflows and work products. The three agreed that NASA should continue to “get back to some of that (former) discipline where we actually do record those things.”

Please click here to view this Masters with Masters.