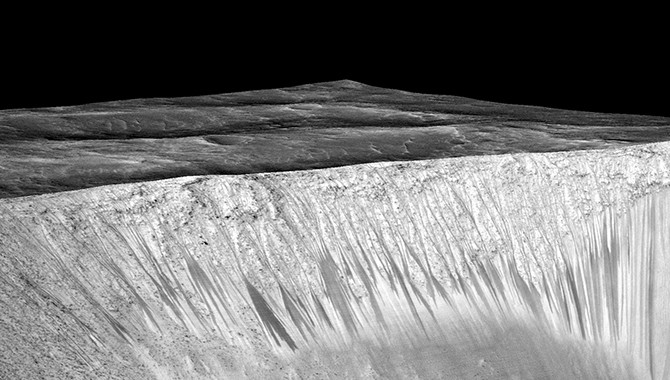 Recurring slope lineae (RSL) are visible on the walls of the Garni Crater on Mars. The RSL are believed to be formed by briny liquid water seeping through the surface of the planet.

Once thought barren, Mars now holds the promise of life beyond Earth as scientists confirm the presence of liquid water on the red planet.

Humans have long been captivated by the idea of life on Mars, a concept that has frequently been linked to the potential presence of water. Early telescopic observations showed what looked like irrigation channels on the planet’s surface, while later observations noted changes in Mars’ polar caps as they shifted and evolved like those on Earth. But when people got a closer look at Mars, they were crushed. The planet appeared parched and lifeless.

Today, that notion is being challenged. “Mars is not the dry, arid planet that we thought of in the past,” said Jim Green, Planetary Science Division Director. He noted that the planet once had extensive water resources as well as a thicker atmosphere and an enormous ocean. “But something happened. Mars suffered a major climate change and lost its surface water.”

Now it seems that water may exist not far below the surface. Starting roughly four years ago, scientists began observing a phenomenon they call recurring slope lineae (RSL). “These are dark streaks that form in late spring, grow through the summer, and then disappear by fall,” said Michael Meyer, lead scientist for the Mars Exploration Program at NASA headquarters.

The RSL are found in multiple regions of Mars and at a range of latitudes. But what is most remarkable is that scientists, including Lujendra Ojha, a PhD candidate at the Georgia Institute of Technology (Georgia Tech), and Alfred McEwen, Principal Investigator of the Mars Reconnaissance Orbiter (MRO) High Resolution Imaging Science Experiment (HiRISE), have finally established that liquid water plays an important part in forming the RSL and, therefore, exists on Mars.

“The key evidence was missing until now, and that was their chemical identity,” said Ojha, the lead author of a study about the RSL. That identity has been confirmed using two instruments on the MRO: a spectrometer, the Compact Reconnaissance Imaging Spectrometer for Mars (CRISM), and the HiRISE camera. Scientists used CRISM, which observes the surface of Mars at a variety of wavelengths, to look at the interaction between the light and the surface material to see if it offered any evidence that RSL are caused by water.

It did. “We found that our observation of Mars is well masked by salts composed of chlorine and oxygen called percholates, especially when they are hydrated. And that is really the key here: the hydration,” said Ojha. “[T]he presence of hydrated salts in these slopes means that these streaks are forming with contemporary liquid water.”

“Our results may point to more habitable conditions on the near-surface of Mars than previously thought,” said Mary Beth Wilhelm, scientist at Ames Research Center and graduate student at Georgia Tech.

“When you look at Earth, water is an essential ingredient. Everywhere we go where there’s liquid water, whether it’s deep in the earth or in the arid regions, we find life,” said Green. “We haven’t been able to answer the question ‘Does life exist beyond Earth?’ But following the water is a critical element of that.”

The existence of water—even briny water—on Mars shifts the scientific investigation from looking for chemical fossils of past life to looking for current examples of life. “We are now at a point technologically, with over fifty years of successful spaceflight, that we have the capability to go there, ask this question of ‘Is there life on Mars?’ and answer it,” said John Grunsfeld, Science Mission Directorate Associate Administrator. “Now that question is not an abstract scientific question, it’s a concrete one that we can answer.”

In the near future, the goal will be to further observe the RSL from orbit and eventually from the surface of Mars. RSL are challenging to examine as they are located in areas that are generally inaccessible to existing rovers, while the MRO only views them in the afternoon, which is the driest time of day. But there may be additional ways to learn more about them, said McEwen. “We could land close to them and observe them from a distance, using remote sensing from the ground. And that would be valuable, especially to watch these things throughout the day, which we can’t do from orbit.”

Using orbiter- and surface-based instruments, scientists can look for RSL to pinpoint places where water exists. “We now have, I think, great opportunities to be in the right locations on Mars to thoroughly investigate,” said Green.

The presence of water is likely to facilitate human exploration of Mars. “When you have water—what’s water, hydrogen and oxygen? That’s what we make rocket fuel out of. Perchlorates: the space shuttle solid rocket boosters are aluminum perchlorate. In principle, you could make solid rocket fuel,” said Grunsfeld “But the water really is crucial because we need water to drink, oxygen to breathe…I think Mars is looking more and more [like] it’s a potential habitat for extant life.”

As current spacecraft such as Curiosity continue to examine the planet, new missions from NASA and other space agencies are imminent.

“We have a number of exciting missions that are cued up, both NASA-led and European Space Agency [ESA]-led, with a partnership with Russia,” said Grunsfeld. These include NASA’s Insight Lander, due to launch in 2016, as well as ExoMars, an ESA/Russia mission also set for 2016. “And then, in 2020, is our next big NASA rover, following on Curiosity. That will actually collect samples, so that eventually we can bring them back to Earth, put them in our best analytical instruments, and see if we see any signs of ancient [life] or conditions that would tell us that there’s life on Mars. That’s just the beginning. That’s just in the next five years.”

The existence of liquid water on present-day Mars was not confirmed overnight. “It is through the multiple spacecraft and the multiple years of observation that we have been able to make this discovery,” said Meyer. Now, as additional spacecraft leveraging increasingly advanced technology join the search, the potential for discovering evidence of life on the red planet grows with each day.

See highlights from NASA’s news conference about the discovery of liquid water on Mars.

Watch a video about how the CRISM instrument is used to learn more about the geology of Mars.

Read an APPEL News article about the first mission to land on Mars.