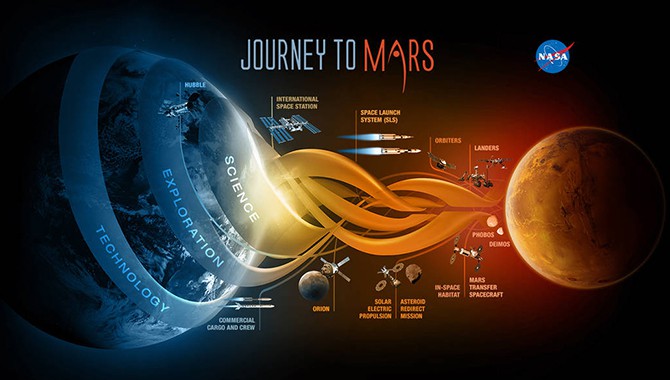 This visual highlights the different elements that support NASA’s journey to Mars.

At a recent summit meeting, Charles Bolden discussed NASA’s plan to reach Mars. “This plan is clear. This plan is affordable. And this plan is sustainable,” he said.

Bolden, the NASA Administrator, spoke at the Humans to Mars Summit to raise public awareness of the rationale for pursuing human exploration of the red planet and the progress of NASA’s plan to do so.

“Mars matters,” he said. “Because its formulation and evolution are comparable to Earth’s… Because we know that at one time it had conditions suitable for life… Because what we learn about the red planet may tell us more about our own home planet’s history and future, and because it might just help us unravel the age-old mystery about whether life exists beyond Earth.”

He identified critical elements that must be developed before a manned mission to Mars is possible. These include the Space Launch System (SLS) and Orion Multi-Purpose Crew Vehicle as well as a deep space habitat and solar electric propulsion capabilities.

“I’m pleased to report that work is already underway at NASA on four of the six critical elements,” said Bolden. He added, “Engineers and scientists around the country are working hard to develop the technologies astronauts will use to one day live and work on Mars and safely return home.”

“Partnerships are really important for us,” said Jurczyk. He cited working relationships with academia and industry as lynchpins of technology development. “We’re trying to look at NASA centers and industry collaborating even more closely to advance technology and leverage expertise and investment. We obviously collaborate with other government agencies,” he added, and stressed the importance of partnerships beyond U.S. borders. “We’re going to look at partnering more internationally to get our technologies developed and infused.”

Both Bolden and Gerstenmaier highlighted the role of the ISS in preparing the agency for crewed deep space exploration. “The human journey to deep space begins in low Earth orbit aboard the International Space Station [ISS],” Bolden said. He pointed to the current One-Year Mission as an important stepping stone for many reasons, including the fact that it will help scientists better understand the long-term effects of zero gravity on human physiology. The next step, he said, will be the agency’s Asteroid Redirect Mission (ARM). “This experience in human spaceflight beyond low Earth orbit will help NASA test new systems and capabilities, such as advanced high-power solar electric propulsion, we’ll need to support a human mission to Mars.”

Grunsfeld returned to Bolden’s initial statement that Mars remains a critical focus for human deep space exploration. “The real key will be when we can get astrobiologists and planetary scientists in spacesuits on the surface. Then we’ll have the kind of pace of scientific discovery that’s going to allow us to answer that question of ‘Did Mars ever have life?’ Which is really the question: ‘Are we alone in the universe?’”

Read previous APPEL News articles about the successful tests of two of the primary pillars of NASA’s manned deep space exploration program: the Orion crew capsule and the SLS booster.