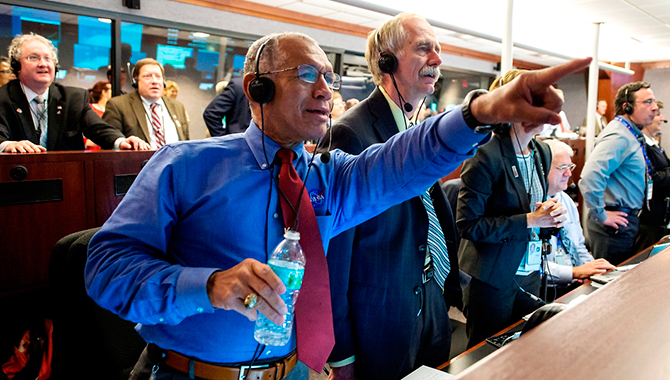 NASA Administrator Charlie Bolden, NASA Associate Administrator for the Human Exploration and Operations Directorate William Gerstenmaier, and others react as Orion splashes down after its inaugural flight.

Orion lifted off from Cape Canaveral on its Delta IV Heavy launch vehicle just after dawn on December 5, 2014. For the next 4 hours and 24 minutes—until its triumphant splashdown in the Pacific Ocean—key elements on the spacecraft functioned extremely well. This was critical, as the goal of EFT-1 was to test Orion by taking it through the riskiest events it would experience with a crew onboard.

From the pressures of launch to radiation exposure through the Van Allen belts to high-speed reentry, the Orion team pushed the spacecraft hard—and it responded positively. “It’s hard to have a better day than today,” said NASA Orion Program Manager Mark Geyer after the flight. “It’s a difficult mission. It’s a tough environment to fly through, with tough objectives that we set for this flight. But it appears that Orion and the Delta IV Heavy were nearly flawless.” 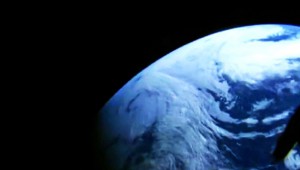 View from an onboard camera as Orion reaches peak altitude of 3600 miles above Earth.

Orion performed admirably from the start. Key objectives shortly after launch, including jettisoning the fairing panels and the launch abort system (LAS), were met smoothly. While the LAS was not active for this unmanned flight, it will be crucial for safety during crewed missions.

The spacecraft reached its initial orbit approximately 17 minutes after launch. At that point, it was put into a “barbecue roll”: a slow rotation as it circled the earth to maintain even thermal distribution. More than an hour and a half later, a second burn of the rocket’s upper stage sent Orion on a path toward becoming the first human-rated spacecraft to go beyond LEO in four decades. Ultimately, the spacecraft reached 3,604 miles above Earth, nearly 15 times higher than the International Space Station. On the way, Orion passed through the Van Allen belts, where the spacecraft was exposed to high levels of radiation. A concern among the Orion team was that the computers, whose microprocessors are extremely vulnerable to the effects of radiation, might be forced to reset. But that did not appear to happen.

One of the greatest tests for Orion was reentry into Earth’s atmosphere at 20,000 miles per hour. This speed exposed the spacecraft’s heat shield to temperatures of 4,000 degrees Fahrenheit. To determine how well the heat shield performed during this process, the team will carefully examine the structure upon its return to Kennedy Space Center (KSC) later this month.

At 11:29 a.m. ET, Orion landed in the Pacific Ocean almost precisely on target, having accomplished its objectives for EFT-1. With the splashdown, a significant milestone for the American space program was met.

The mood at KSC was buoyant from the moment of liftoff. Orion belongs to that NASA center in a way no other spacecraft has before. As Mike Hawes, Lockheed Martin Orion Program Manager, explained, “We were going to build a spacecraft at the Kennedy Space Center. That had not been done. And we have now done that.”

While the focus of the flight test was the spacecraft itself, the Delta IV Heavy rocket also performed effectively. “The upper stage put us right where we needed to be,” said Geyer. “I want to thank the United Launch Alliance team for the fantastic job.”

The work on EFT-1 is not yet complete. Lockheed Martin will provide a report on the data from the spacecraft’s 1,200 sensors within the next three months. That information will guide decisions about the next evolution of Orion, which is now in development for its subsequent flight: Exploration Mission-1 (EM-1).

The first crewed mission for Orion, EM-2, will not occur before 2021. But in some ways, said Flight Director Mike Sarafin, that day has already come. “While this mission was unmanned, we were all aboard Orion.”

Watch a video of Orion’s splashdown in the Pacific Ocean.