Back to Top
Home/APPEL News/APPEL News Digest/For Orion, A Smooth Landing was Part of the Plan 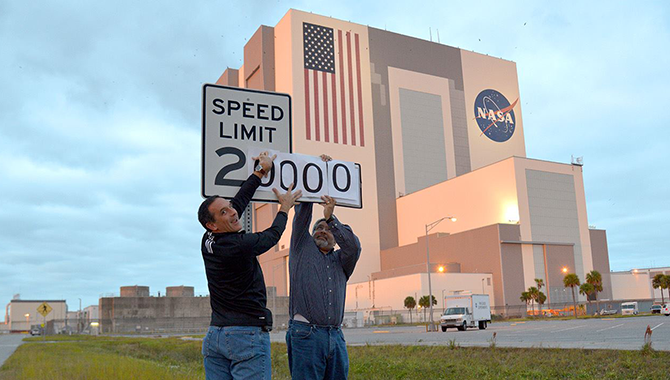 During its first flight, Orion reentered Earth’s atmosphere going nearly 20,000 miles per hour yet splashed down minutes later at a gentle 20 miles per hour.

On December 5, 2014, Orion—NASA’s first human-rated spacecraft to go beyond low Earth orbit (LEO) in 40 years—successfully completed its maiden voyage: Exploration Flight Test-1 (EFT-1). Standing behind the success of EFT-1 was an impressive team of dedicated professionals from Lockheed Martin, who managed the mission, United Launch Alliance, who provided the launch vehicle, and NASA. Shortly after the flight, APPEL News spoke with a key member of the Orion team: Stuart McClung, Orion Crew Module Landing and Recovery System Functional Area Manager. Amidst the celebration surrounding the nearly flawless flight, McClung spoke about the contributions he and his team made to EFT-1.

APPEL News: Thanks for taking the time to speak with us. We want to hear your thoughts on the test flight, but first—can you tell us a bit about what you do at NASA?

Stuart McClung: My area of expertise is hardware development, production, and installation. My role is building hardware. I help build landing systems, mechanisms, and pyros. I have been doing this since 1989. I worked on the Space Shuttle Program through 2006 and then came over to Orion.

APPEL News: What kind of performance data do you hope to get out of EFT-1?

McClung: We had 1,200 sensors on the vehicle that were distributed to address our key test objectives. Some were accelerometers, some measured temperatures, some measured vibrations. We put them all in the vehicle so we’ll know how it behaves. We will get all that data back and disburse it to the various engineers that own those individual components. Then they will look at how their predictions about the way the component was supposed to behave compare with how it really behaved. If it’s different, why is it different? Understanding that allows you to iterate the design of all of these different parts. For example, can we save weight somewhere? If it turned out [a component] didn’t shake or move as much as we thought it would, that means I don’t have as much energy in that location that I need to protect for. So I can make it a little bit lighter. That’s good because every pound we take out is a pound we can put towards science.

APPEL News: How did the Landing and Recovery System (LRS) perform? Did everything go according to plan?

McClung: Everything came out on time. The visuals that I saw on TV looked right and I got no feedback from the team that we had any issues at all. LRS, the parachute system, is designed to deploy around 25,000 feet. There is actually software in the vehicle that acts if the vehicle goes unstable for any reason. In that scenario, starting as early as 35,000 feet, you could deploy the parachutes. That didn’t happen. The sequencing of the reefing on the drogues and the reefing on the mains all looked normal to me. The chutes cut away liked we expected.

It will be interesting if we get all the parachute hardware back. The parachutes are not naturally buoyant, so [recovering them] depends on how they land and how quickly the boats get out to them. We would learn a lot by inspecting them in detail, but we didn’t put flotation hardware in to save them because it is just an extra expense and extra weight. We will get great camera views. That, combined with the instrumentation we have on board, will give us a lot of data from today. [Editorial note: Two of three main parachutes were recovered.]

APPEL News: It sounded like the parachutes were coming in with impact at 20 miles per hour—

McClung: Twenty-five feet per second, which is roughly 20 miles per hour.

APPEL News: Is that optimal for future missions with astronauts? Should it be faster? Slower?

McClung: Actually, it is a pretty optimal area. If you come in slower, you pay a penalty for accuracy. Eventually, you have to get on a main parachute and get down to that low speed. And the slower you are, depending on the winds, you might drift further. So you balance that out. If you came in faster, you’d start exposing [the parachutes] to a lot of energy. We had a great three-chute landing today like we were supposed to.

APPEL News: Would it have worked the same way if Orion landed on the ground instead on water?

McClung: One of the reasons we went away from a land landing is we have to make the assumption that our astronauts are pretty deconditioned. They have been in space for a long time. I was telling someone in Houston the other day, “It’s not like you have J.J. Watt in that capsule.” Instead, you have to assume that you have a fairly deconditioned astronaut in there. If you’re going to land on land, you do not want to let the vehicle tumble. So we went away from a land landing because it was going to take us about 1,500 pounds of extra equipment to guarantee that we would land and stay upright in a variety of different wind conditions. At the end of the day, it wasn’t worth the trade. Plus, if we came up short or long, if we had an abort scenario, they might land in the water anyway, which meant we had to protect for both. It was more complication than deemed necessary.

APPEL News: At APPEL we work on a lot of collaborative projects, so we were interested to learn that EFT-1 was run by Lockheed Martin, not NASA. How was that collaborative experience? Was it different than NASA-run missions you’ve been a part of in the past?

McClung: It was really very good. We have a great Lockheed-NASA team. We even had a couple of examples where we had engineers that were based out of Mission Operations Directorate (MOD), and civil servants who had worked on the space shuttle who were looking for a new opportunity once the shuttle program wound down. So we embedded them into the Lockheed team. We got pretty ‘badgeless.’

APPEL News: What do you mean by ‘badgeless’?

McClung: You get people saying, ‘I am a landing systems engineer’ or ‘I am a pyrotechnic engineer’—not whether they work for NASA or a contractor. Another really cool thing that came out of Constellation and now Orion is that we have reached out, so it is not just Johnson Space Center (JSC), Kennedy Space Center (KSC), and Marshall [Space Flight Center (MSFC)] working on Orion. We’ve got engineers from Langley [Research Center (LaRC)], Ames [Research Center (ARC)], Glenn [Research Center (GRC)]—basically all the centers have blended in and worked on this. The agency and the program made an effort to go find the skillsets that are needed independent of where they are located. We’re co-located. We were using WebEx, Lync, and Skype all of the time. When Lync locks up, it is an absolute nightmare.

APPEL News: It’s always the little things that bring you down. Here you are deploying parachutes and mortars from 30,000 feet, and you have to worry about video conferencing.

McClung: WebEx will bring you down [laughs]. You can’t just walk down the hall to talk with someone. It was interesting because early on there was some nervousness among all of the flight program centers to reach out. But the blending of [the team] was way better than I think anyone expected. It made the agency quite a bit healthier because we reached out and used the right person at the right time to solve a problem, wherever they were.

APPEL News: How did the team work together overall? Were there bumps in the road?

McClung: The bumps were what you get, development bumps. It was pretty good from a team perspective. The bumps that came along were kind of the technical surprises you expect to see. When you’re experienced, you know they are going to happen. You don’t want them to happen, but they are going to happen. And we did some amazing stuff solving those [problems]. We made a commitment. We said, ‘We’re going to go fly in 2014.” There were a handful of problems that came along as we built and tested the vehicle, but we got them solved and we met our commitment.

APPEL News: How many people were in charge of LRS for EFT-1?

McClung: Within our office, three of us do LRS. Yasmin Ali, Tara Radke, and me. Tara was on the boat. Yasmin was in mission control. But it is really broader than that by the time you include all the NASA and Lockheed folks. The parachute team is a big team because the parachutes have a lot to them. So I’d say there were 100 people in LRS or 100 people that touched pieces and parts of LRS. The parachutes are built by Airborne Systems in Santa Ana, California, and the mortars are built by General Dynamics up in Seattle. We use Yuma Proving Ground, which is an army base. We use a C-17 out of the Air Force. So when you start counting those folks as well, the people who run the tests for us, the list of people involved starts getting really big.

APPEL News: You’ve been at NASA almost 25 years and you’ve worked on a few missions. Was anything different about this mission? One thing that stood out?

McClung: This one is a little bit more personal for me, probably because I was involved from almost the beginning. I spent time down at Michoud when we built some of the primary structures. Then I spent nine months down here [at KSC] when we assembled the vehicle. I followed this [mission] from the start all the way through. Shuttle was great. I worked on docking systems, among other things, on shuttle. The first time we docked to MIR was a great day. I had a big hand in that. That felt really good. Today felt probably a little bit better.

APPEL News: What is the next step for you in terms of Orion?

McClung: After a little celebration today, Monday is a new day. We’ll go to work on the next step. I will be out in Arizona in two weeks for our next parachute drop test. It is a pretty cool event. Not as cool as what you just saw, but we put the test vehicle out at 25,000 or 35,000 feet, it is a full scale mock-up of the vehicle, and it comes down through the sky. When we’re done, we can walk up to the test article. So we are underneath it as it is happening. Visually, it is very interesting.

APPEL News: One last question: were you nervous about today’s flight test?

McClung: As I told my wife a couple of days ago when she asked if I was nervous or excited, “No, we’ve done the work. The hardware is installed. It’s either going to work or not going to work—being nervous isn’t going to help anything.” I did a really good job of managing that emotion until they made the call that we were at 60,000 feet, because we start the parachutes at about 30,000. And suddenly it was put up or shut up time.