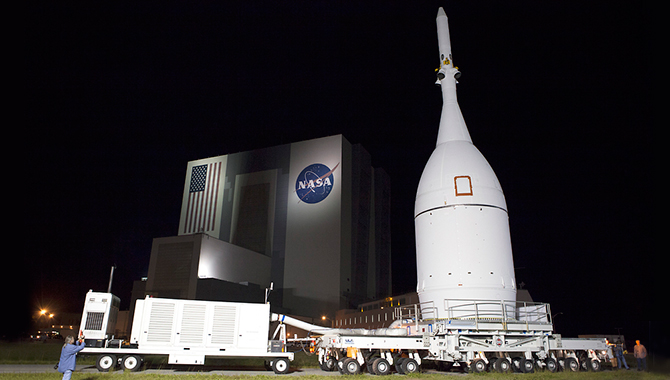 Orion in front of the Kennedy Space Center Vehicle Assembly Building before being mounted on its launch vehicle, the Delta IV Heavy rocket.

On Thursday, November 20, Orion passed the Flight Readiness Review (FRR) for Exploration Flight Test-1 (EFT-1) and was given a “go” to proceed.

Orion’s first flight is scheduled to lift off on December 4. Like many NASA missions, the team behind EFT-1 consists of a range of individuals, from NASA civil servants to contractors from different commercial companies. But one thing makes this team unique: when the spacecraft launches on December 4, 2014, NASA won’t be managing the mission. Instead, the agency contracted Lockheed Martin to lead the effort.

“We took a different approach with EFT-1,” Bill Hill, NASA Deputy Associate Administrator for Exploration Systems Development, confirmed. “Our mission operations folks and our ground systems folks are basically subcontractors to Lockheed Martin in both doing the mission ops and flight ops as well as the actual recovery.”

Bryan Austin, Flight Operations Senior Manager at Lockheed Martin, serves as mission director for EFT-1. The situation is somewhat unique, he agreed. But effective teamwork has produced positive results. “From the design, through the production, through the risk assessments, the contingency planning, and now into the mission execution, the teamwork has been vital.”

With Lockheed Martin overseeing the mission, different teams will manage each stage of the flight test. At Cape Canaveral, United Launch Alliance (ULA), which developed the Delta IV Heavy rocket that will be used for EFT-1, will handle the countdown and launch. Once the spacecraft is in orbit, NASA’s Mike Sarafin, Lead Flight Director for EFT-1, and his operations team will be in charge. They will adhere to an agreed-upon set of flight rules and procedures. If something occurs outside of the flight rules, the decision about how to proceed will be handled by a mission management team. “Just like we did on a shuttle flight,” Mark Geyer, Orion Program Manager, explained. The mission management team is chaired by Austin, with Geyer and others providing input. Finally, the recovery effort will be handled by Jeremy Graeber, NASA Recovery Director for Orion. Throughout, Lockheed Martin will remain responsible for integrating the teams and managing the mission overall.

Regardless of the specific team involved, the focus will be on risk reduction at each stage of the flight test. “EFT-1 is basically a compilation of the riskiest events that we’re going to see when we fly people [in Orion],” said Geyer.

“We’re going to focus on the critical separation events throughout ascent and deorbit,” said Austin. Seventeen distinct separation events will be tested in preparation for the day when humans will ride aboard Orion. Other key test areas include heat shield performance, radiation effects, and parachute deployment.

The heat shield will be exposed to about 84% of the projected speed associated with reentry from a lunar mission. “The heat shield’s going to see about 4000 degrees. It’s about 1.6 inches thick. We project about 20% of that will burn off,” said Geyer. During the recovery phase, the team will take great care to preserve the heat shield so that it can be thoroughly examined in order to determine the efficacy of its performance.

As for radiation, Orion will travel through parts of the Van Allen belts, experiencing far more radiation than the International Space Station. “That’s a big issue for the computers,” explained Geyer. In particular, the processors are susceptible to radiation effects. The team has contingency plans in place should the computers reset during travel through the belts. As an added precaution, the team intends to conduct most of the mission’s key activities outside of the areas of intense radiation.

Although the spacecraft will not be manned for EFT-1, all of the tests will be conducted with the ultimate goal in mind: enabling human spaceflight through Orion. “We are flying a flight primary structure,” said Geyer. “You could fly people in this [crew capsule]. You could fly people with this heat shield, with the forward bay cover, and with these parachutes.”

Nonetheless, this particular version of Orion will never carry a crew. “After we built the primary structure, we found a way to make it lighter,” Geyer explained. “And so while it is a flyable structure for people, we’re actually going to lighten [it]. The structure for the very next build, which is [Exploration Mission 1 (EM-1)], is already in manufacture in Southern California and it’s 25% lighter.”

Sarafin reinforced the focus on Orion’s future as a crewed vehicle. “This mission is significant in that it enables human spaceflight to deep space and to destinations we have yet to imagine,” he said. “The aerospace industry as a whole is a tough business…anybody that’s been in this business for any amount of time understands that it takes a great deal of fortitude and perseverance. We intend to test ourselves on this mission, and we intend to test our spacecraft before we put humans on board.”

Orion is scheduled to lift off at 7:05 a.m. EST on Thursday, December 4, 2014. APPEL will be onsite at Kennedy Space Center featuring live social media coverage of the events leading up to the launch as well as the launch itself. Join us on Twitter and Facebook to learn the latest and to connect with APPEL.