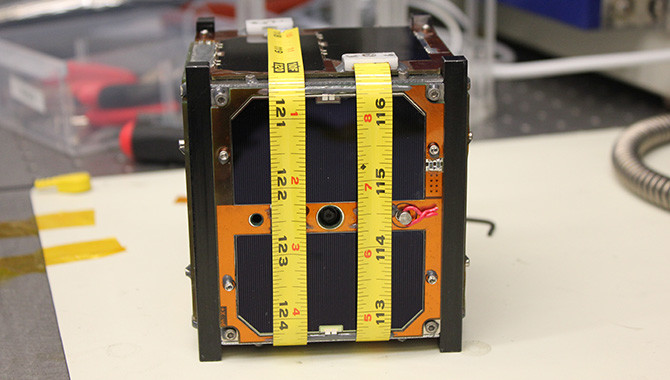 This cubesat was developed under the Small Spacecraft Technology Program at NASA. The agency’s Cube Quest Challenge seeks to encourage non-government teams to develop similar small satellites that could potentially further NASA’s journey to the moon and beyond.

As Orion soars through Exploration Mission 1 (EM-1) in 2018, its payload will include several small satellites designed to enhance deep space exploration.

The development of innovative technologies that will further NASA’s capacity for human spaceflight is a critical aspect of the agency’s journey to Mars. Orion and the Space Launch System (SLS) are key examples of work being done at the agency to expand the potential for manned deep space exploration. The One-Year Mission on the International Space Station (ISS) is another unique means of obtaining information needed to enable an eventual mission to Mars.

But one of the agency’s initiatives for advancing deep space technology is less evident—because it is not being conducted by NASA at all. Instead, the Cube Quest Challenge encourages non-NASA individuals and groups to conceive and develop novel technologies that will facilitate space exploration for NASA and the nation. The quest is part of the Centennial Challenges Program, which since 2005 has conducted more than 10 challenges and awarded more than six million dollars in prize money toward technology advancement.

“We’ve used [the Centennial Challenges Program] to both accelerate the development of new and innovative ideas and technologies and engage a broader set of stakeholders and participants in our programs—folks that have great ideas but might not have gotten involved in contributing to technology for NASA without this sort of challenge approach,” said Steve Jurczyk, associate administrator of the Space Technology Mission Directorate (STMD).

The Cube Quest Challenge stands out among the other Centennial Challenges as the agency’s first in-space competition to develop advanced technology.

“Cube Quest is an opportunity for non-government cubesat developers and builders to compete in lunar orbit and deep space for accomplishments in communication, navigation, and longevity for a prize purse that totals five and a half million dollars,” explained Jim Cockrell, Cube Quest Challenge manager.

The challenge consists of four initial phases, called ground tournaments. Over the course of the four tournaments, teams will design, build, and deliver flight-qualified small satellites that can perform advanced operations in lunar orbit or deep space. Upon completion of the ground-based phases, the satellites from three winning teams will be launched during EM-1 in order to demonstrate their capabilities.

For Ground Tournament 1, which took place last month, thirteen teams presented their designs. “They explained to the panel of five judges how their Cube Quest mission works, they got feedback from the judges on a technical assessment of their likelihood of mission success, and an assessment of their progress towards compliance with the challenge rules and with the Space Launch System interface and safety requirements. At the end of Ground Tournament One, the judges awarded scores and the top five teams will win prizes of twenty-thousand dollars each,” said Cockrell.

Members from the five winning teams briefly discussed their projects. Wes Faler, speaking for Team Miles of Tampa, Florida, said, “We take our team name, Miles, from the poet Robert Frost’s line, ‘But I have promises to keep and miles to go before I sleep.’ That’s because our little satellite, the size of two loaves of bread, is going to spend two months around the moon and then make a mad break for Mars.” He added, “We think our system design pushes the envelope for autonomous navigation as well as powered flight distance.”

A spokesperson for the team from Ragnarok Industries in Wilmington, Delaware explained that the group is made up of previous NASA engineering interns. “We’re hoping that…we can demonstrate advanced propulsion and advanced communications, and we’re also trying to include a very decent amount of radiation and engineering involved to survive these environments beyond Earth,” he said.

According to their spokesman, the Novel Engineering team from Cocoa Beach, Florida is composed of engineers with varying backgrounds and experience levels. They have partnered with a diverse group of individuals, industry, and academia to assemble the equipment for their satellite, which includes a high-gain deployable mesh antenna, a cold plasma thruster developed at Novel Engineering, and a high-efficiency solar array.

Team KitCube consists of undergraduates and graduate students from the Massachusetts Institute of Technology (MIT). Spokesperson Kerri Cahoy said, “We’re going after the Lunar Derby Challenge. [We’re] going into lunar orbit and then [attempting to achieve] the best burst data rate, trying to send as much data down to the earth as quickly as we can.” The group will build a laser transmitter to accomplish their goal.

Cislunar Explorers is made up primarily of students from Cornell University. “The work here represents the culmination of lots of PhD-level research and some undergraduate research from the last five or six years at the university,” said spokesperson Mason Peck. As the name suggests, the team is pursuing the Lunar Derby Challenge, with a focus on water electrolysis propulsion and a low-cost optical navigation system.

Ground Tournament 1 represented the initial stage of technology development, corresponding roughly with a mission concept review or conceptual design review. “The teams each submitted documentation in the form of engineering drawings, plans and procedures, concept of operations, and other document that describe in detail what their mission concept is and their plans for building their spacecraft,” said Cockrell. Subsequent ground tournaments will advance team projects through a phase similar to a preliminary design review up through the delivery of a flight-ready satellite.

The STMD is looking closely at the technologies developed by the teams. “Cubesats and small sats are becoming more important to space tech and the agency,” said Jurczyk. “We use them increasingly to demonstrate technology through spaceflight. We’re also looking at how we can do future science missions or human precursor missions using small sats and cubesat to get most of the science with those missions at the fraction of the cost of the traditional satellite approach.“

“We’re really lucky to have the opportunity within NASA to be able to have the Centennial Challenges Program that can help push the technologies in a way that is so different and in a way that allows people that might normally not be part of the space industry to become part of space industry,” said Monsi Roman, Centennial Challenges Program manager at Marshall Space Flight Center (MSFC).

Teams are currently hard at work progressing their projects for Ground Tournament 2. For a lucky few, a ride on Orion—at least for their cubesat—may await.

Watch a video about the Centennial Challenges Program.