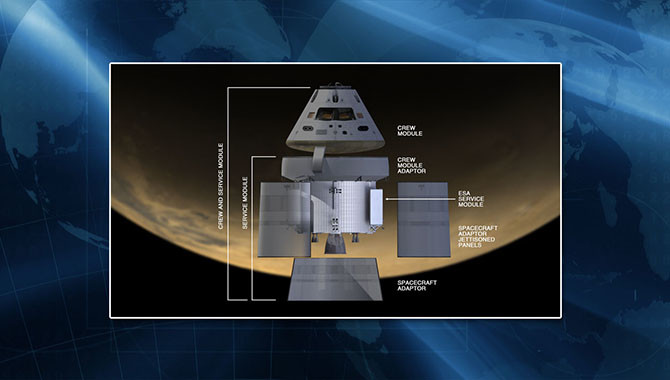 The Orion crew capsule and European Service Module will fly together in 2018 during Exploration Mission 1 (EM-1).

One year after Exploration Flight Test 1 (EFT-1), the successful maiden voyage of Orion’s crew module, another crucial piece of the spacecraft is set to begin testing.

On Dec 5, 2014, EFT-1 exceeded expectations. Orion, the first spacecraft in 40 years designed to take humans beyond low Earth orbit (LEO), blasted off from Cape Canaveral on a Delta IV Heavy launch vehicle and flew 3,604 miles above Earth during its four-hour trip. Key elements of the Orion crew capsule performed extremely well as the test took the spacecraft through the riskiest events it would experience with a crew on board.

Orion’s next flight will be Exploration Mission 1 (EM-1), planned for 2018. In EM-1, the Space Launch System (SLS)—the most powerful rocket in the world—will send the crew capsule into orbit along with a second, critical, component of the spacecraft: the European Service Module (ESM). Designed and developed by the European Space Agency (ESA) and prime contractor Airbus Defense and Space, the ESM will provide electricity, water, oxygen, nitrogen, and temperature control for the spacecraft.

“It’s a really important piece of hardware in our spacecraft,” said Orion Program Manager Mark Kirasich. “First of all, its propulsion system. It provides the translational capabilities, attitude control, and during the highest parts of our ascent, it gives the spacecraft an abort capability should we have a contingency going uphill. In addition to that, it has very large solar arrays. It generates the electricity that powers all the equipment on board Orion. It has radiators that overthrow heat and keep our equipment and the humans inside the spacecraft nice and comfortable. And it also has gas tanks and water tanks to provide the air the crew breathes and the water that they drink. So as you can easily understand, the European Service Module is a critical element of Orion. We really need it—we aren’t going anywhere without it.”

Before flying in 2018, the service module—like every component of Orion—must undergo rigorous testing. A structural test article of the ESM recently arrived at NASA’s Plum Brook Station in Sandusky, Ohio. At Plum Brook, engineers will simulate the launch environment to see how the ESM handles the sound pressure and intense vibrations it will experience during EM-1.

“[Plum Brook Station] is the only place that you can test a vehicle of this size, fully deployed, in its launch and in its space configuration, which is so important in ensuring mission success,” said James Free, Director of Glenn Research Center. “We need to test the way we’re going to fly. In addition to the vibration, acoustic, and space environment capabilities that are here, the solar array deployment’s going to be done here, which means we’re going to fire pyrotechnics to simulate the deployment of those solar arrays. [We’ll] also simulate separation from the launch vehicle and the shocks that that induces into Orion.”

The ESM is designed to work seamlessly with the crew capsule, with each module supporting the functionality of the other.

“Our European Service Module couldn’t fly alone,” agreed Oliver Juckenhofel, ESM Program Manager at Airbus Defense and Space. “It’s missing a little bit of intelligence, we’re not having an onboard computer. We’re having a lot of actuators and things that we can execute, but the whole mission control is done first of all in the crew module, which is delivered by Lockheed, and then of course by NASA for the overall mission responsibility. So NASA can’t fly without us, we cannot fly without them.”

That spirit of cooperation is an important element of the Orion Program. The NASA-ESA partnership began officially three years ago, when the U.S. agency signed an agreement with the Europeans and welcomed them as partners into the Orion Program. To ensure that the two capsules are fully integrated, engineers from Airbus Defense and Space will reside near Plum Brook and work alongside NASA and Lockheed Martin Orion team members as they conduct critical tests.

The service module structural test article will never fly. Initially, it will undergo testing in its current form at Plum Brook Station. Later, parts will be sent to Kennedy Space Center to be tested with the Orion test article provided by Lockheed Martin. The flight articles for the crew module and the service module are currently under construction on both sides of the Atlantic. Their development will be informed by tests occurring over the next two years in preparation for Orion’s next flight.

“The testing that’s going to take place here in the Space Power Facility over the next years is really about ensuring the success of EM-1,” said Free. “By discovering issues in a controlled testing environment on the ground, we can correct those issues before launch rather than after, when there’s less we can do and at a far greater cost.”

Tests of the ESM’s structural integrity will commence at Plum Brook Station in February 2016.

Watch a video about the work being done across the country on key components of NASA’s journey to Mars: the Space Launch System, Orion, and the Ground Systems Development and Operations Program.