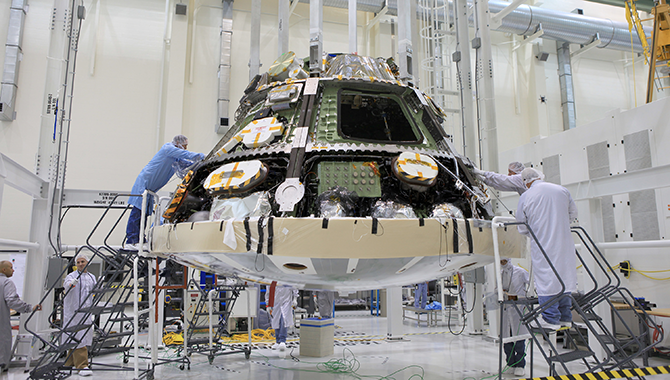 Engineers finalize the installation of the world’s largest heat shield on Orion.

The upcoming Orion Exploration Flight Test-1 (EFT-1) will leave Earth without a crew, but everything about the spacecraft is engineered to facilitate human spaceflight.

On December 4, 2014, Orion will launch from Cape Canaveral on a United Launch Alliance Delta IV Heavy rocket. In just over four hours, the spacecraft will orbit Earth twice and travel more than 15 times farther out into space than the International Space Station (ISS). Due to the high altitude it achieves, Orion will reenter Earth’s atmosphere at very high speeds—nearly 20,000 miles per hour—producing temperatures close to 4,000 degrees Fahrenheit. EFT-1 will test systems such as the heat shield, attitude control and guidance, avionics, software, launch abort system, and parachutes.

Critical as it is to test these systems, the significance of the flight test itself may be just as important. “[Orion is] possibly the most significant human spaceflight milestone this year, pointing toward our return with humans into deep space,” said NASA Administrator Charlie Bolden.

To achieve this milestone, engineers from NASA and Lockheed Martin have worked for years to develop a spacecraft that can safely deliver—and return—humans to deep space destinations. One critical area of development was the heat shield. Because Orion will reenter Earth’s atmosphere at speeds far beyond those reached by the space shuttle, it will generate much hotter temperatures. In order to protect future crew from those temperature extremes, engineers equipped Orion with a 16.5-foot diameter heat shield, the largest in existence. The shield is covered in Avcoat, an ablative coating designed to burn away during reentry, preventing temperature extremes from penetrating the crew module. In addition, nearly 1,000 heat-absorbing ceramic tiles were attached to the upper segment of the crew module.

“It is extremely exciting to see the heat shield in place, ready to do its job,” said Mark Geyer, Orion program manager, after the shield was installed. “The heat shield is such a critical piece, not just for this mission, but for our plans to send humans into deep space.”

The nearly 180-foot Delta IV rocket that will send Orion into space is already in vertical position at the launch pad at Cape Canaveral, and the final major assembly steps before Orion joins the rocket are now complete. The launch abort system and fairing were two of the final elements installed on the spacecraft. Although the launch abort system will not be active on EFT-1, it will be critical for crew safety once humans are aboard Orion. The launch abort system is designed to propel the crew module away from a failing rocket should something go wrong during liftoff. The fairing was also designed with human spaceflight in mind: it is will reduce sound and vibrations, resulting in a smoother experience for a crew.

“Work on this design sets us up for following missions,” Geyer said. “Orion will look remarkably similar for Exploration Missions 1 and 2. All of the systems that are flying on EFT-1 were designed from the beginning to be human-rated, to be able to fly people onboard.”

Orion is on track to reach the pad in Cape Canaveral in November, where it will be placed on top of its launch vehicle in preparation for the early December EFT-1. Ultimately, Orion will enable human space exploration beyond low Earth orbit to destinations such as an asteroid and, eventually, Mars.