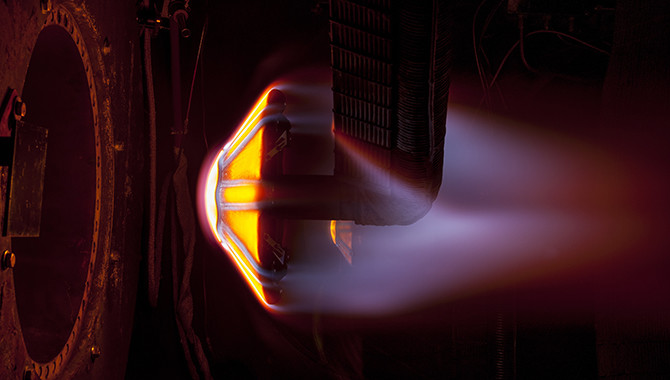 Technology to support the agency’s journey to Mars is being advanced at NASA centers across the country. One example is Adaptive Deployable Entry and Placement Technology (ADEPT): a concept for a carbon fabric heat shield that can be deployed to open like an umbrella as a spacecraft descends toward the surface of Mars. ADEPT is being explored at Ames Research Center.

The agency charts a clear and sustainable path toward human spaceflight beyond low Earth orbit (LEO) in NASA’s Journey to Mars: Pioneering Next Steps in Space Exploration.

“[W]e are closer to sending human beings to the red planet than ever before in human history,” NASA Administrator Charlie Bolden said recently at The Center for American Progress.

The new report sets forth the agency’s plans and current progress in the march toward manned deep space missions. At the heart of the plan are two critical components: an integrated NASA effort across centers and ongoing collaboration with partners at other space agencies and in private industry and academia. The journey itself consists of three phases: Earth Reliant, Proving Ground, and Earth Independent. Each phase will advance technologies and capabilities that pave the way toward the next phase.

“To complete this journey,” said Bolden, “the plan concentrates both on getting to deep space and extending the life of the International Space Station [ISS].”

The Earth Reliant phase, in particular, makes critical use of the ISS as well as commercial cargo and crew transportation. “The reason that keeping the space station operational is so important is that it allows our astronauts to test the technologies that drive exploration. It also allows NASA to continue our study of the effects of long durations in space on the human body while allowing our astronauts to continue their work off the earth for the benefit of Earth,” said Bolden.

The second phase, the Proving Ground, consolidates efforts around cislunar space. From orbit near the moon, NASA can develop and test the capabilities needed for deep space missions while remaining close enough to Earth to return within days, if necessary.

“We’ll be operating in cislunar space robotically and with humans for about ten years, during the decades of the twenties,” Bolden said.

The final phase, Earth Independent, will take NASA and its partners into orbit around Mars, potentially onto Martian moons, and eventually onto the surface of the red planet itself. Mars is a meaningful target for humans because its formation and evolution appear similar to that of Earth’s. As a result, learning about the red planet may provide important information about the past and future of our planet. In addition, Bolden said, the journey to Mars will support life on Earth today.

“Across the board, our country’s new technology economy is driving economic growth and NASA’s work is providing significant fuel for that engine. We’re exploring deep space, but we’re anchored right here on Earth, where we’re creating job and fueling innovation and growth.”

Key technological components of the journey to Mars are already in development. The Orion Multi-Purpose Crew Vehicle—the first spacecraft in 40 years designed to transport humans beyond LEO—completed its maiden voyage, Exploration Flight Test 1 (EFT-1), in December of 2014 and is now working toward a second flight, Exploration Mission 1 (EM-1), in 2018. The Space Launch System (SLS), which will power Orion beyond LEO, recently passed its critical design review (CDR). New technology supporting the journey into deep space continues to be advanced with a particular focus on three areas: transportation beyond LEO, including new forms of propulsion; enabling crew to live and work in space; and staying healthy far from home.

The key to realizing these goals, said Bolden, is a sustained commitment to doing so. “We’ve got to stay focused. If we change our minds at any time in the next three or four years—which always is a risk when you go through a government transition—my belief is we’re doomed.”

By maintaining a sustained focus across each phase of the journey, the agency’s path to the red planet is clear. It begins with the current work on the ISS, leads to cislunar efforts—including the Asteroid Redirect Mission—in the 2020s, and culminates with humans on Mars in the 2030s.

Read an APPEL News article about the Orion spacecraft.

Read an APPEL News update on the Space Launch System.