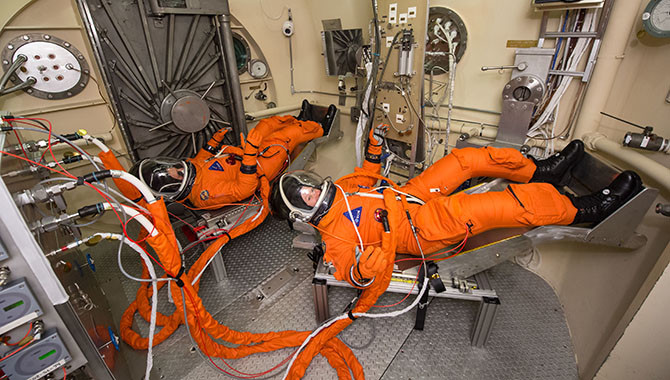 The spacesuit, known as the Modified Advanced Crew Escape Suit, that crew will wear during Orion deep space missions is tested at Johnson Space Center.

With the successful completion of Key Decision Point C (KDP-C), the Orion spacecraft is cleared to move ahead toward Exploration Missions 1 and 2 (EM-1 and EM-2).

The Orion Multi-Purpose Crew Vehicle is the first spacecraft in 40 years designed to transport humans beyond low Earth orbit (LEO). In December 2014, Orion completed its maiden voyage, Exploration Flight Test 1 (EFT-1), which pitted the vehicle against the rigors of space beyond LEO to test flight systems that are critical for crew safety. Results from the nearly flawless mission, as well as from the program’s Preliminary Design Review (PDR) held in October 2014, informed the recent KDP-C assessment.

“KDP-C is a very critical milestone for all our programs and projects in the agency,” said NASA associate administrator Robert Lightfoot. “It’s comprised of two key areas that we review: we take a look at the technical progress of a program and do a programmatic assessment as well.”

From a technical standpoint, the KDP-C review went extremely well. “With the great progress the team has been making,” said Lightfoot, there was “really nothing to stop from clearing to proceed to [Critical Design Review (CDR)].”

Based on the KDP-C programmatic assessment, the launch date for EM-2 has been extended to April 2023. EM-2 will mark Orion’s second mission in conjunction with the Space Launch System (SLS), NASA’s new heavy-weight launch vehicle.

“Orion has always been working toward EM-2,” said Lightfoot. “We chose EM-2 because that was…the first crewed mission and it would have all the systems on board that we need.” The shift in date ensures a joint confidence level (JCL)—a combination of cost and schedule considerations—of 70% that the program will proceed as planned. “Seventy percent is a best practice for us,” he added, noting that while the official date is April 2023, “we routinely have the programs and projects work to internal dates that are a lot more aggressive.”

“[W]e’ll work to an internal date that will get the EM-2 hardware and vehicle ready to fly by much earlier than the 2023 date. We’re aiming right now for August of 2021,” confirmed Bill Gerstenmaier, associate administrator for the Human Exploration and Operations Mission Directorate (HEOMD).

Things are currently proceeding as planned. The first weld on the capsule is complete, the avionics work is on target, and the full-scale testing article for the new heat shield will be done by the end of September. Nonetheless, the Orion team appreciates that the April 2023 plan includes extra time should the need for it arise.

“All of a sudden, something can happen,” said Gerstenmaier. “An aluminum sheet can not get manufactured correctly, you can have a problem with a shipment where a truck has a problem on the road delivering, or you have a high acceleration in some avionics parts that are being shipped some place.” He added, “One of the major things is we’re going to take all of the avionics boxes that fly on EM-1 and the intent right now is to refly those boxes on EM-2. So the concern is that if you have any kind of problem with the box on EM-1 and it’s not available for EM-2, you could run into a problem where that impacts the build of EM-2.”

EM-1 will test the Orion capsule in conjunction with the SLS, ensuring major systems such as communications, navigation, and software function as planned. EM-2 has a broader focus: capsule plus crew. As Orion’s first manned mission, EM-2 will determine how Orion interacts with the astronauts on board. After those two flights, the capsule will be ready to take crew beyond LEO for longer missions.

Lightfoot stressed the importance of maintaining a focus on the bigger picture for the program. “We’re building a multi-decadal human exploration program. While the individual launches of EM-1 and EM-2 are very important, and they are great indicators of our progress…we’ve got to balance those individual missions with the overall context of this exploration journey we’re on.”

Orion is a key component of the agency’s long-term deep space exploration goals. “[T]he first critical role that Orion starts playing is when we go to the proving grounds in space,” said Gerstenmaier. “Orion’s unique in the fact that it’s not just a capsule, it has some habitation capability and it can support four crew for up to 21 days. What that gives us is an ability to use the capsule without any other hardware around the moon.” The agency will take all of the skills learned on and off the International Space Station in LEO and apply them to deep space exploration using Orion, starting in the lunar proving grounds before moving on to the Earth-independent regions and heading toward Mars.

The Orion Program is now in the CDR phase. This comprehensive review of spacecraft systems and structures will go on for several months, with the final evaluation set to occur in October 2015.

“I think that this is a pretty exciting time in human spaceflight,” said Gerstanmaier. “[W]e’re putting the United States in place to continue to push human presence out in the solar system.”