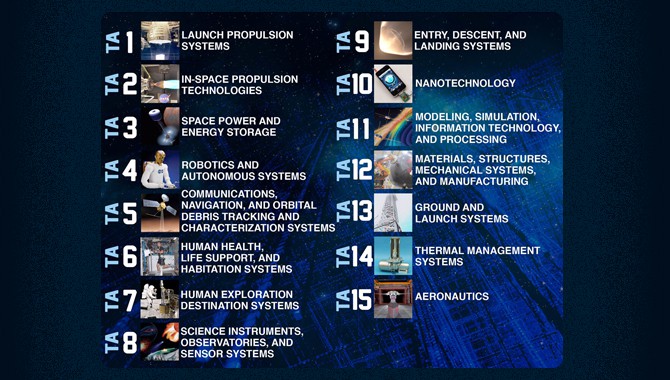 The roadmaps are designed to guide technology development across all four mission directorates at NASA. As such, they organize the agency’s entire technology portfolio. A key purpose of the roadmaps is to examine state-of-the-art technologies in relation to mission goals for the next twenty years. The roadmaps are updated every four years, while NASA’s investment in technology is prioritized every two years and investment decisions are addressed annually.

“NASA’s roadmaps identify what we could do; prioritization identifies what we should do; and then the investment decisions identify what we will do,” NASA Chief Technologist David Miller explained at the American Institute of Aeronautics and Astronautics SciTech 2015 Forum. It’s a winnowing process that, he said, “leads to a lot of tough decisions.”

The agency first created a set of 14 draft roadmaps in 2010. Each roadmap focused on a specific technology area (TA) to ensure needed capabilities were developed. After review by a specially appointed steering committee from the National Research Council (NRC), with input from independent expert panels as well as the public, the roadmaps were finalized and released in 2012.

For 2015, the updated draft roadmaps focus on 15 TAs, with aeronautics joining the list. They also include a strong emphasis on information technology. The roadmaps have been reconceived to be more functional, making it easier to identify cross-cutting technologies that support multiple TAs and reducing the potential for duplication.

Another important difference between the 2015 version and earlier roadmaps is the clear link between technologies and specific agency goals. “What is it we’re going to try to build with each technology?” said Faith Chandler, director for Strategic Integration, Office of the Chief Technologist. To answer this, a performance goal for each new technology highlights the capability it provides.

The roadmaps are intended to facilitate short-term agency mission goals. But, cautioned Miller, they must also support long-term needs. “[I]f we sacrifice longer-term technologies or…curiosity-driven science for the benefit of near-term mission-specific technologies,” he said, “we mortgage our next generation of missions as well as the technological benefits that they could provide to other economic sectors through their dual use of that technology. The balance between near- and far-term, while ensuring not only necessary but sufficient technology investment, is essential in this process.”

The agency is currently soliciting public feedback on the draft roadmaps. The NRC will perform an independent review of the roadmaps to prioritize the technologies within each TA before the final results are completed and released.

Learn more about NASA’s Office of the Chief Technologist.