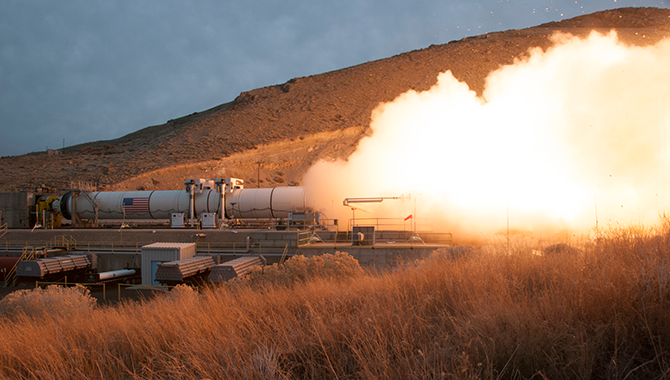 The SLS solid rocket motor fires up during its successful hot motor test on March 11, 2015.

As NASA celebrates the centenary of its predecessor, the National Advisory Committee for Aeronautics (NACA), the agency marks a major milestone along the journey to Mars.

In March 1915, the NACA was founded to advance American leadership in aviation technology. One hundred years later, the focus of NASA—established in 1958 as the heir to the NACA—is on technology that enables manned deep space travel. On March 11, 2015, this focus sharpened with the successful Qualification Motor-1 (QM-1) test of the Space Launch System’s (SLS) solid rocket booster (SRB).

The SLS, NASA’s new heavy lift launch vehicle, is being developed for the Orion spacecraft. More powerful than any existing launch vehicle, the SLS is designed to maximize cost and schedule efficiencies by incorporating—and evolving—hardware used in successful previous spaceflight programs. Its SRB is a prime example: based on the four-segment booster used to launch the space shuttle, the SLS version adds a fifth segment for additional power and lift before separation. It is the largest and most powerful booster ever built.

“These motors have 25% more energy than the motors we used to get the shuttle off the ground,” said Todd May, SLS Program Manager.

The goal in developing the booster was two-fold. “The intent here was not only to have a higher-performing vehicle, but to have one that actually costs less. And we believe we’ve achieved that,” said Alex Priskos, manager of the SLS Boosters Office.

“We’re taking advantage of what we had in the shuttle days,” added Bruce Tiller, deputy manager of the SLS Boosters Office. “We’ve added to it and improved it to get some more performance that the new vehicle needs.”

According to Fred Brasfield, vice president of NASA Programs at Orbital ATK, the SLS team identified several hundred areas of improvement in designing and constructing the new booster. So while the program minimized costs by incorporating heritage hardware where appropriate, the booster “had to be completely redesigned for a new mission. It’s a larger booster, and the mission profile is sufficiently different to where pretty much everything on the inside of the booster is different,” said Brasfield. The changes include a higher-performing rubber insulation, a new booster core, and a different propellant grain inside the fuel, which necessitated a redesign of the tooling used to create the inside of the motor. Structural changes as well as new avionics support the long-range focus of the SLS. The program also changed the geometry of the propellant surfaces to burn more at the beginning of the rocket firing.

QM-1 fired up with an igniter that shot a flame 150 feet down the length of the rocket to spark all of the propellant surfaces simultaneously, producing 3.5 million pounds of thrust for the first 25 seconds of the test. Once ignited, the propellant burned from the inside out for two minutes. Unlike liquid motors, the SRB thrust cannot be turned off or adjusted after firing. For the test as well as for future flights, engineers must carefully ensure in advance that the booster provides exactly the amount of thrust needed at every point during the burn.

The ground test examined the SRM’s performance at the high end of its propellant temperature range. In preparation, the entire booster was heated up to 90 degrees Fahrenheit, a process that took months to complete.

“This motor has to be qualified from 40 degrees Fahrenheit up to 90 degrees Fahrenheit,” said Alicia Carrillo, chief engineer for SLS booster integration at Orbital ATK. “This is our hot motor test, so it’s just over 90 degrees. You might think that 90 degrees doesn’t sound hot, but keep in mind there’s a million and a half pounds of propellant up there that we have to get up to an average temperature of 90 degrees.” During QM-1, internal booster temperatures exceeded 5,600 degrees.

The test included more than 500 sensors to gather data that will be used to analyze the booster’s performance. A second qualification test, in which the components are cooled to 40 degrees before firing, will be conducted in early 2016 to assess SRB performance at the low end of the temperature range. Following these two tests, the booster hardware will be qualified for the first SLS flight: Exploration Mission-1 (EM-1). In EM-1, the SLS will launch the Orion capsule for the first time. A second test flight, EM-2, is planned for 2021, when the SLS and Orion will send astronauts beyond low Earth orbit (LEO) for the first time in 40 years.

Read a previous APPEL News article about the use of heritage hardware in the SLS.