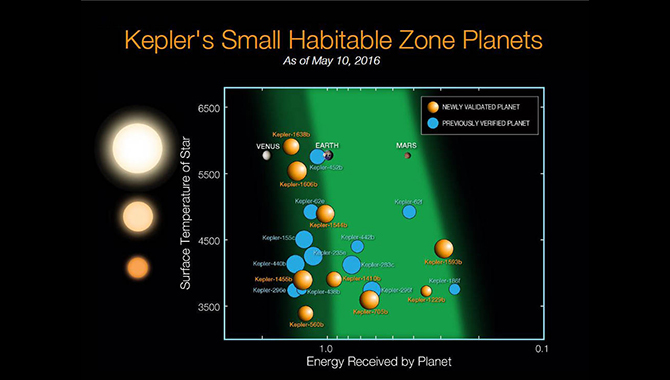 The Kepler space telescope has confirmed the existence of 21 exoplanets that are less than twice the size of Earth and are orbiting in the habitable zone of their stars. Being in this zone suggests liquid water could exist on the planet’s surface, indicating they may harbor the potential for life. In the graphic above, the blue circles represent 12 previously known exoplanets, while the orange circles represent nine planets recently confirmed by a new statistical validation technique.

The Kepler space telescope leads the way in the discovery of exoplanets: worlds that orbit other stars in our galaxy. Recently, the team doubled the number of confirmed planets out there.

The Kepler mission has spent the past four years closely examining a section of the sky that contains roughly 150,000 stars, with the goal of discovering which of them harbor potentially habitable Earth-sized planets.

“One of the great questions of all time, and one of NASA’s science objectives in our journey to the solar system and beyond, is whether we are alone in the universe,” said Paul Hertz, director of NASA’s Astrophysics Division. “And the first step in answering this question is to detect and understand the population of planets around other stars, or exoplanets. NASA Kepler space telescope is the world’s leading facility in discovering exoplanets.”

Kepler uses the transit method to pinpoint planets orbiting other stars: it looks for periodic dips in the brightness of a star that could indicate a planet is moving in front of it. Once such a “planet candidate” is observed, the next step is to confirm that it is indeed a planet and not an astrophysical imposter, which mimics the appearance and behavior of a planet.

“Kepler’s camera is sensitive enough to measure that small reduction in starlight and thereby detect the presence of the planet,” said Hertz. “By analyzing the resulting data, Kepler scientists have so far identified about 4,700 exoplanet candidates, and have validated about 1,000 of them as confirmed exoplanets.”

The number of verified exoplanets recently doubled, thanks to a new statistical validation technique employed by the Kepler team.

“[T]he process of verifying a candidate as a true planet has traditionally involved detailed, in-depth study on a case-by-case basis using follow-up observations from ground-based telescopes,” said Timothy Morton, associate research scholar at Princeton University. Such observations include radial velocity observations, which determine a planet’s mass, and high-resolution imaging observations that rule out the existence of imposter scenarios. “One of the biggest challenges for Kepler is that these follow-up observations that have been traditionally used to verify planets are time and resource intensive.”

Morton developed a more efficient technique for determining whether a signal detected by the Kepler telescope is actually a planet. Along with Natalie Batalha, Kepler mission scientist at Ames Research Center (ARC), he co-authored a paper showing that by applying this method to the items in the July 2015 planet candidate catalog, they doubled the number of confirmed exoplanets discovered by Kepler, adding 1,284 new ones to the list.

“A good analogy here is to imagine planet candidates as bread crumbs. If you drop a few large pieces of bread on the ground, you can pick them up individually one by one. This is like the ground-based [method of verifying] transiting planets. But if you spill a whole bucketful of small crumbs, you’re going to need a broom to clean them up,” said Morton. “Our broom here is a new analysis technique that enables us to quantify the probability that any given signal is in fact caused by a planet without requiring any follow-up observations.”

The new method relies on two simulations to conclude whether a planet is real or an imposter. The first simulates the different signal shapes caused by planets and imposters, while the second looks at the expected rate of imposter occurrence.

“Combining these two different kinds of information gives us a reliability score between zero and one for each candidate. Candidates with reliability greater than 99% we call validated planets,” said Morton.

This technique has important repercussions for Kepler’s catalog of planets, including its most valuable discoveries: small planets orbiting in the habitable zone. Planets in this zone—also called the Goldilocks zone—are typically less than twice the size of Earth, presumed to be rocky, and orbit their star at a distance that implies liquid water could exist on the planet’s surface.

In the years since the mission began, the Kepler team previously confirmed the existence of a dozen exoplanets in the Goldilocks zone. “Tim’s work has added nine more planets to this exoplanet Hall of Fame,” said Batalha.

The new analytical method will be applied to the remaining data from Kepler as well as to findings from K2, Kepler’s extended mission, which is expected to continue until the spacecraft runs out of fuel in mid-2018. But the utility of the method won’t end there.

TESS will use the same transit method employed by Kepler to identify exoplanets. Unlike Kepler, TESS will survey the entire sky as it examines 200,000 of the nearest and brightest stars for evidence of orbiting planets. Two additional exoplanet finder missions, the James Webb Space Telescope (JWST) and the Wide-Field Infrared Survey Telescope (WFIRST), will add to the findings from Kepler and TESS.

“The Webb telescope will be capable of observing transiting large exoplanets and detecting starlight from the parent star as it filters through the planet’s atmosphere. By studying that filtered starlight, scientists will start to understand the atmospheric composition of those large exoplanets. The ultimate goal of our search is to detect the light from a habitable exoplanet and analyze that light for gases, like water vapor, oxygen, methane, and carbon dioxide; gases that might indicate the presence of a biological ecosystem on that planet,” said Hertz.

Charlie Sobeck, mission manager for Kepler and K2 at ARC, said all of the missions are designed to complement each other. “Together, the Kepler and K2 missions are part of what I think of as an arc of discovery, which does extend from the work that has been done with previous telescopes like Hubble on to what the new missions are going to do.”

Over its four years of operation, added Sobeck, Kepler “produced a singular and remarkable dataset.”

“Thanks to Kepler…we now know that exoplanets are common, that most stars in our galaxy have planetary systems, and that a reasonable fraction of the stars in our galaxy have potentially habitable planets. That is, rocky planets in the habitable, or Goldilocks, zone. Knowing this is the first step to addressing the question, ‘Are we alone in the universe?’” said Hertz.

So far, a number of the planets identified by Kepler appear intriguingly Earth-like. “I think that it’s safe to say that Kepler-186f and and Kepler-452b have both held that title because they are roughly Earth size. Kepler-186f is almost exactly the same size of Earth, orbiting a cooler star in its habitable zone, kind of at the outer edge of the habitable zone. Kepler-452b is unique in that it’s orbiting a star almost exactly like our sun, and it’s orbiting at an orbital distance almost exactly like Earth,” said Batalha. Kepler-452b, however, is roughly 60% larger than Earth.

Kepler mission development was managed by the Jet Propulsion Laboratory (JPL). The Kepler and K2 missions are run by ARC for NASA’s Science Mission Directorate. The spacecraft’s flight system is operated by Ball Aerospace & Technologies Corporation in conjunction with the Laboratory for Atmospheric and Space Physics at the University of Colorado in Boulder.

Read an APPEL News article about the discovery of Kepler-452b, an Earth-like planet that orbits a sun-like star.