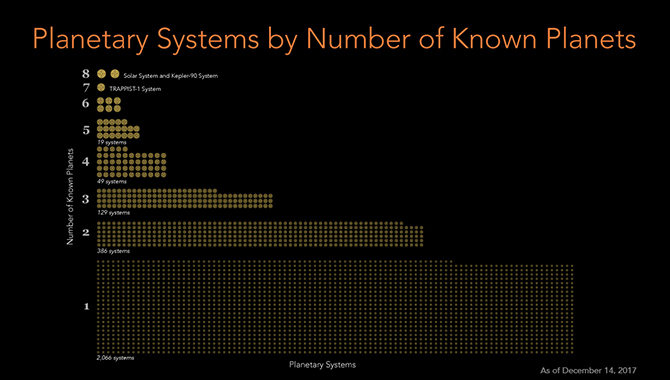 There are only two known eight-planet systems: Kepler-90 and our solar system. The TRAPPIST-1 system is currently the only confirmed seven-planet system, while there are many more six-, five-, four-, three- and two-planet systems, and over 2,000 stars orbited by a single planet.

Launched in 2009, the Kepler Space Telescope spent four years looking for evidence of exoplanets among a field of 150,000 stars. Scientists poured over 30,000 of the strongest signals spotted by Kepler, searching for planets orbiting around distant stars. Through a combination of automated tests and human eyes, they confirmed more than 2,500 exoplanets—ranging in size from smaller than Earth to larger than Jupiter—in that data. However, searching the data, even for strong signals, was time and labor intensive. Investigating thousands of weaker signals noted by Kepler would be time-prohibitive for humans.

Fortunately, those weaker signals were the subject of an AI research project led by Christopher Shallue, senior software engineer at Google AI, and Andrew Vanderburg, astronomer and NASA Sagan Postdoctoral Fellow at The University of Texas, Austin. They worked together on a machine learning program that taught a computer to identify actual planets—as opposed to false positives—among the Kepler data set. The type of machine learning used is known as a neural network.

“A neural network is loosely inspired by the structure of human brain,” said Shallue. “It’s made up of layers of neurons that each do a simple computation and then pass information on to the next layer of neurons. You can think of the neurons as switches that activate depending on the patterns of neurons that were activated in the previous layer. With many layers of connected neurons, the neural network can learn to recognize complex patterns.”

To train the computer, they gave it a set of 15,000 examples collected by Kepler, consisting of both actual planets and non-planets that had previously been labeled by human scientists. The computer used its pattern-recognition ability to learn the characteristics that distinguish a planet from a false positive. Shallue and Vanderburg then asked it to apply those criteria to a new set of data: 670 weak signals not previously examined by humans.

It found two now-confirmed exoplanets among the 670 weak signals: Kepler-90i and Kepler-80g. “These two planets have weak signals that were missed in all previous searches of these stars,” said Shallue.

Kepler-90i is the eighth confirmed planet in the Kepler-90 system. With this discovery, Kepler-90 now ties our solar system for the highest number of known planets identified around a single star.

“[It is] the only known eight-planet system outside of our own,” said Vanderburg.

“The new planet’s host star, Kepler-90, is a G-zero type star that is a little hotter, larger, and more massive than the sun, and which lies about 2,500 light years away in the northern sky,” he said. “Before this work, we already knew that Kepler 90 hosted seven planets. We knew of two planets a bit larger than the earth orbiting close to their star, three planets a bit smaller than Neptune orbiting further out, and two outer planets about the size of Saturn and Jupiter.”

Kepler-90i is the smallest of the Kepler-90 planets, which may be why its signal was weaker in comparison to the others in its system. Based on its size, it is probably rocky and lacks the thick atmosphere associated with gas giants. It rotates very closely around its host star, with an orbital period of roughly 14.5 days. Its surface is assumed to be extremely hot, with average temperatures of 800 degrees Fahrenheit.

The second exoplanet discovered by Shallue’s and Vanderburg’s machine-learning program is an Earth-sized body known as Kepler-80g. While it shares a similar orbital period with Kepler-90i, it circles around a different type of host, which is closer to an M-type star.

The Kepler Space Telescope is not designed to look for signs of life, so whether either new planet exhibits the potential to support life beyond Earth is unknown at this time. Future NASA missions, such as the James Webb Space Telescope, will be equipped to collect data concerning biosignatures on exoplanets.

In the meantime, Shallue and Vanderburg will turn their AI program to examining weak signals in the full original Kepler data set. The Kepler Space Telescope will also continue its observations.

“NASA continues to use the Kepler Space Telescope to observe additional regions of the sky within the plane of the solar system. To date, we’ve observed an additional 200,000 stars in a thousand square degrees along the ecliptic plane,” said Kepler project scientist Jessie Dotson, Ames Research Center (ARC).

The Kepler and K2 missions are managed by ARC for the Science Mission Directorate (SMD). Mission development was managed by the Jet Propulsion Laboratory (JPL). Ball Aerospace & Technologies Corporation operates the flight system with support from the Laboratory for Atmospheric and Space Physics at the University of Colorado in Boulder. The work of Shallue and Vanderburg was performed through the Carl Sagan Postdoctoral Fellowship Program executed by the NASA Exoplanet Science Institute.

Watch a video about the AI discovery of Kepler-90i in the Kepler data.

Read an APPEL News article about the final Kepler Catalog based on the original mission, which identified hundreds of new potential planets.