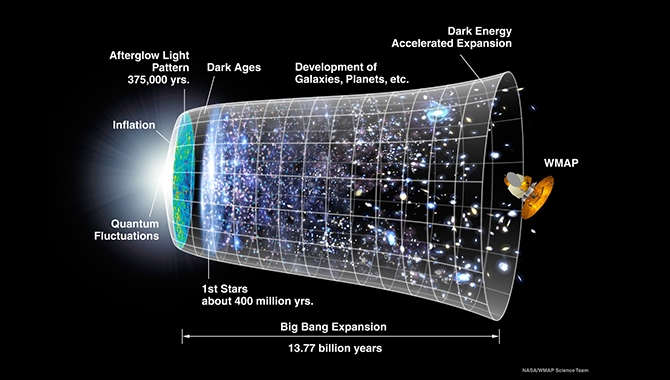 On June 30, 2001, a single-instrument probe launched from Cape Canaveral, Florida on a Delta II rocket and cracked open a precise and accurate window into the history of the universe.

The Wilkinson Microwave Anisotropy Probe (WMAP) was conceived to measure the oldest light in the universe by mapping cosmic microwave background (CMB) radiation. CMB radiation, inadvertently discovered in 1965 by Arno Penzias and Robert Wilson, is the remnant heat left over from the Big Bang. It permeates the cosmos and is a key to understanding the origin, composition, and even future of the universe.

The goal of WMAP was to map fluctuations, called anisotropy, in the CMB over the full sky. WMAP accomplished this by employing differential microwave radiometers to measure discrepancies in temperature between pairs of points in the sky. To ensure that WMAP did not record emissions from the Milky Way galaxy, it used five separate radio bands and was positioned away from the sun, earth, and moon to gain an unobstructed vantage point into deep space. WMAP was located 1.5 million kilometers from Earth in orbit about the second Sun-Earth Lagrange point.

To capture differences in microwave radiation from two distinct spots in the sky, the WMAP Observatory relied on back-to-back Gregorian primary reflectors focused on points that were roughly 140 degrees apart. It conveyed the captured signals to differential receivers housed below the optical system. Each day, WMAP scanned roughly 30% of the sky. To do this, it was necessary to carefully control the attitude of the spacecraft, which was accomplished through a combination of star trackers, gyros, coarse and fine sun sensors, and reaction wheels. WMAP provided daily downloads to the Deep Space Network.

WMAP was not the first NASA mission to detect irregularities in the CMB: the Cosmic Background Explorer (COBE), launched by NASA in 1989, did so earlier. But WMAP provided much greater resolution, sensitivity, and accuracy in its findings, lending unprecedented precision to human understanding of the origin and evolution of the universe. This understanding transformed the field of cosmology.

Through WMAP, scientists learned with near-certainty (margin of error less than 1%) that the universe is 13.77 billion years old. They also determined that the CMB measured by WMAP was released very early on: roughly 375,000 years after the universe was formed. This meant that the image of the full sky captured by the mission was essentially the first fine-resolution “baby picture” of the universe. The mission also revealed important, previously unknown, information about the make up of the universe: 4% atoms, 23% dark matter, and 73% dark energy. In addition, the scientific findings supported the theory of “inflation”: that the universe experienced an explosive early episode of expansion, which eventually led to the formation of galaxies.

See a “baby picture” of the early universe captured by WMAP: the nine-year microwave sky.

A representation of the evolution of the universe over 13.77 billion years.