Back to Top
Home/APPEL News/APPEL News Digest/This Month in NASA History: COBE Scientists Were Celebrated for the CMB 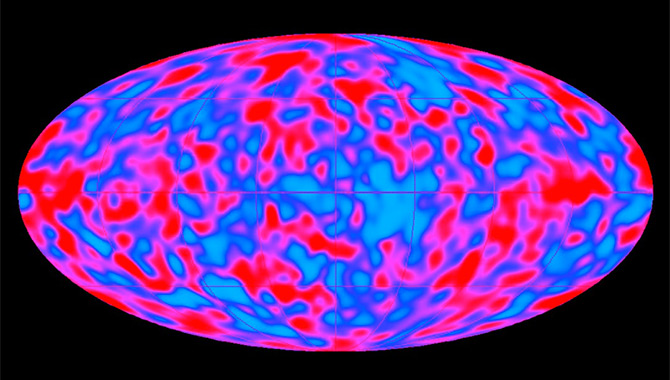 This image represents a “baby picture” of the universe: an image of the cosmic microwave background radiation in the universe based on data from the COBE mission. Small variations in temperature, shown in blue and purple, indicate the beginnings of structures such as galaxies that populate the universe today.

A decade ago, Dr. John C. Mather became the first NASA civil servant to receive the Nobel Prize for Physics in recognition of his work on cosmic microwave background radiation (CMB).

The CMB was discovered, accidentally, in 1964 by two radio astronomers from Bell Telephone Laboratories in New Jersey. Arno Penzias and Robert Wilson were using an enormous antenna as a radio telescope to study signals from space, but excess radiation kept interfering with their work. An annoying noise, like persistent static, permeated the microwave range in all directions. The scientists did everything they could to identify the source so they could rule it out of their observations. Initially, they thought the excess radiation could be coming from the antenna itself; later, they thought it might be caused by pigeons nesting in it. They considered the possibility that it originated from nearby urban areas, like New York City; but that wasn’t the case, either. Eventually, the two men contacted a team of researchers at Princeton University, led by Robert Dicke, who offered a theoretical explanation for the unwanted signal. These physicists believed the radiation could be the remnant heat left over from the big bang when the universe was formed. They theorized that it might still permeate the cosmos as a source of diffuse, low-level radiation. Penzias’s and Wilson’s radio noise supported this theory, and in 1978 the two astronomers were awarded the Nobel Prize in Physics for their discovery.

Still, it was just a theory. No one could say for certain whether the CMB really was ancient light left over from the big bang—or even whether the big bang model was anything other than a theoretical concept. One scientist interested in learning more was Mather, a young physicist at the Goddard Institute for Space Studies (GISS) in New York, whose thesis project during graduate school was designed to measure the CMB from a balloon-borne spacecraft. The balloon failed, but Mather hadn’t forgotten the scientific concept. He got a second chance to pursue the notion in 1974, when NASA released an Announcement of Opportunity soliciting new science mission proposals utilizing small Explorer-class spacecraft. Mather teamed up with Michael Hauser from Goddard Space Flight Center (GSFC), Rainer Weiss from the Massachusetts Institute of Technology (MIT), and David Wilkinson from Princeton University to develop a proposal for a COsmic Background Explorer (COBE) to study the CMB. As it turned out, two other teams proposed missions with a similar focus.

None of the CMB proposals were selected. Instead, NASA pursued the Infrared Astronomical Satellite (IRAS) mission. Yet the agency remained intrigued by the notion of investigating the CMB, and two years later convened a Mission Definition Study Team consisting of Mather (now at GSFC), Hauser, Weiss, Wilkinson, and individuals from the two competing CMB proposal teams, including George F. Smoot from the University of California at Berkley (UC Berkeley) and Samuel Gulkis from the Jet Propulsion Laboratory (JPL). A year later, this committee came back to NASA with a proposal for the COBE mission. Their goal was to study the CMB by observing the faint infrared and microwave radiation from the early universe, measuring the spectrum of the CMB and mapping its distribution across the sky as they looked for evidence of the first formation of galaxies and stars.

The mission would feature three instruments, each with a different principal investigator (PI): a Far Infrared Absolute Spectrophotometer (FIRAS), a Differential Microwave Radiometer (DMR), and a Diffuse Infrared Background Experiment (DIRBE). The FIRAS, led by Mather, would measure the spectrum of the cosmic background radiation to determine whether the properties of the universe were consistent with the theory that all radiant energy was released during the first year after the big bang. The DMR, helmed by Smoot, would map the sky at three frequencies, looking for anisotropy: variations in the brightness of the CMB across the sky, which—if present—would indicate the emergence of galaxies after the big bang. Finally, the DIRBE, with Hauser as PI, would seek out infrared background light emanating from the earliest generation of stars and galaxies. In addition to acting as PI for the FIRAS instrument, Mather would be the study scientist for COBE overall, working closely with the engineering team to address scientific requirements for the mission. 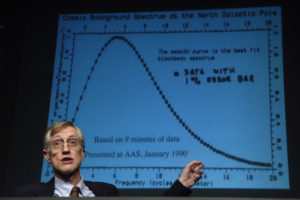 Dr. Mather shows some of the earliest data from the COBE mission during a press conference held on Oct. 6, 2006, at NASA Headquarters. Photo Credit: NASA/Bill Ingalls

In their original proposal, the COBE satellite was intended to launch directly into its operating orbit on a Delta II rocket. But with the advent of the space shuttle, NASA decided that the orbiter should lift COBE into space instead. This required design modifications so that the spacecraft could be affixed to the shuttle and carry several thousand pounds of fuel, as the Challenger couldn’t transport it all the way to its desired orbit. The design was approved and the satellite was built in-house at GSFC. The spacecraft, which was roughly the size of a car, weighed in at over two tons and featured a 650-liter superfluid helium cryostat to keep the FIRAS and DIRBE instruments cold throughout the mission. It also had a funnel-shaped sunshade to protect the instruments. The sunshade prevented light from the earth, sun, or moon from interfering with detection of light from the CMB and shielded the instruments from radio waves coming from Earth or from other satellites. The launch was scheduled for 1988.

Everything changed on the morning of January 28, 1986, when the Space Shuttle Challenger exploded shortly after launch. Following the tragedy, NASA science missions were grounded as they faced the problem of reaching orbit without a shuttle to carry them there. Engineers on the COBE mission began revisiting the original design of the spacecraft: a smaller satellite that could be launched on a rocket without the need for extra fuel. Unfortunately, NASA didn’t have a Delta rocket on hand: the fleet had been abandoned once the shuttle was in use. It turned out, however, that there was still a store of Delta parts available, and eventually a new rocket was constructed.

The launch—the first science mission sent into orbit after the Challenger was destroyed—took place on November 18, 1989 from Vandenberg Air Force Base in California. Liftoff went smoothly, but then problems began to mount. First, the cryostat exterior began cooling much more quickly than anticipated. Then one of the gyros in the pointing system failed. The next issue arose as the spacecraft passed over Antarctica, where the brilliant reflection of sunlight bouncing off the continent’s snow and ice fields nearly burned out COBE’s electrical power system. Then radiation from the Van Allen belts disrupted the mirror control electronics on the FIRAS instrument. Despite these challenges, the spacecraft reached its operating orbit and almost immediately began sending back critical data. Ten months later, the liquid helium in the cryostat, which kept the FIRAS and DIRBE instruments cold, ran out. Even that couldn’t derail the mission: the FIRAS, which was most reliant on the deep cold of the cryostat, had already done its key work, while the DMR wasn’t dependent on the cryostat at all and the DIRBE was able to continue operating at warmer temperatures.

The FIRAS was the first instrument to send back novel data. Shortly into the mission, Mather and his team confirmed that the universe was a uniform temperature, just 2.7 degrees Kelvin, which was consistent with the theory that all of the radiant energy in the universe was released during the first year after the big bang. The next instrument to produce results was the DMR, which mapped the CMB and confirmed that it radiated from all directions of the universe, not from any local source. The DMR map also provided evidence of anisotropy: small variations in the generally consistent temperature of the universe that indicated the early formation of structures such as galaxies. Finally, as hoped, the DIRBE observed infrared light emitted by the first generation of galaxies and stars.

COBE operated for four years. Findings from the mission provided observational evidence supporting the big bang theory, and in 2006 Mather and Smoot were co-recipients of the Nobel Prize for Physics for their discoveries concerning the CMB. While the COBE mission ended in 1993, many members of the team went on to work on related projects, including the Wilkinson Microwave Anisotropy Probe (WMAP), which mapped the CMB in even greater detail, and the James Webb Space Telescope (JWST), which will launch in 2018 to examine the origins of the universe in order to learn more about the first objects that formed when the universe cooled after the big bang.

Watch a video from the APPEL Library in which Mather discusses lessons learned from COBE at a PI Masters Forum in 2011.

Read a 2007 interview with Mather in ASK Magazine.

Learn more about COBE’s successor, the WMAP, in an APPEL News article.