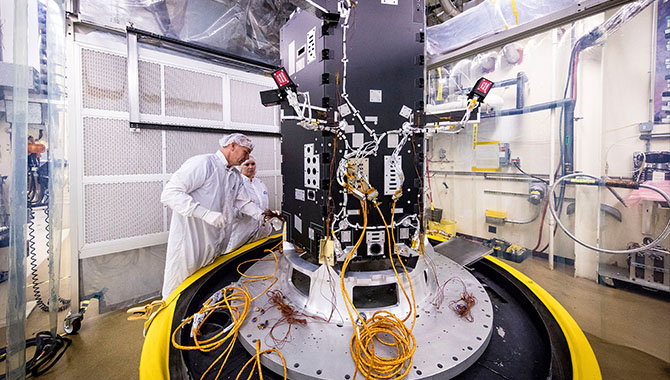 Engineers at the JHUAPL prepare the primary structure and propulsion system of the Parker Solar Probe for testing in 2016. In late 2017, the spacecraft will be moved to GSFC, where it will undergo final testing before launch in mid-2018.

Roughly one year from now, the Parker Solar Probe will become the first spacecraft to travel directly into the sun’s corona and fly within four million miles of our star.

The Parker Solar Probe mission has been six decades in the making. The concept was born in 1958, shortly after physicist Eugene Parker, then an assistant professor in the Enrico Fermi Institute at the University of Chicago, predicted the existence of solar wind. His prediction—which was proven two years later by direct observations from Mariner 2—revolutionized understanding of the sun, the heliosphere, and interplanetary space.

In late 1958, the importance of Parker’s finding was recognized by the National Academy of Sciences’ Space Studies Board, which proposed a solar probe mission to study particles and fields in the vicinity of the sun. It took 60 years to overcome the technical challenges of building such a probe, but the mission is now on the verge of heading for the sun.

Originally known as the Solar Probe Plus, the mission was renamed the Parker Solar Probe at a ceremony in May 2017. Speaking at the event, Parker described some of the challenges inherent in designing and building a spacecraft that could withstand the temperature and radiation extremes present in the sun’s corona. One attempt to build such a vehicle was made by the Jet Propulsion Laboratory (JPL). Their concept was a spacecraft that would get as close as four solar radii to the sun, where the sunlight is 3,000 times more intense than it is in Earth orbit.

“Essentially, JPL went for broke. They designed a fabulous spacecraft,” said Parker. “Unfortunately, only very restricted instrumentation can survive [at four solar radii] because the spacecraft serves as a heat shield and you do not dare poke anything out from behind that heat shield to make a measurement.”

The next attempt was made by the Johns Hopkins University (JHU) Applied Physics Lab (APL). “[They] designed for a slow approach inward to nine solar radii, where the sun is only 570 times more intense than it is here at the orbit of Earth, and it is possible to operate a complement of instruments peeking out from behind the heat shield for an extended period of time,” said Parker.

The solar probe was conceived to answer critical questions arising out of Parker’s original discovery of solar wind. For instance, why is the corona—the sun’s atmosphere—hotter than the surface of the sun itself? And how does the solar atmosphere become so energized that is escapes the sun’s gravitational force and flows, as solar wind, throughout the solar system? Answering these and other questions will help scientists better understand many phenomena—including solar wind—and improve predictions about space weather, which may help protect technology from potentially damaging solar events, such as flares and coronal mass ejections (CMEs).

The Parker Solar Probe is expected to launch between July 31 and August 9, 2018, from Kennedy Space Center (KSC). It will rocket out of Earth’s atmosphere on a United Launch Alliance Delta IV-Heavy with a third stage. The upper stage is necessary, said mission project scientist Nicola Fox, “because we need to be moving so fast so that we can surf around the sun, make all those measurements, and not get pulled into the sun.” The Parker Solar Probe will travel at about 430,000 miles per hour, which is 118 miles every second.

Over the course of the mission, the solar probe will fly past Venus seven times in order to achieve its precise orbital targets around the sun. The first flyby will occur only eight weeks after launch, followed by the mission’s first close approach eight weeks after that. It will then loop out to Venus before heading again for the sun. With each subsequent Venus flyby, the spacecraft will gradually get closer and closer to the sun until it is less than four million miles, or 10 solar radii, from our star.

“We’re going to be seven times closer than any other mission has ever been,” said Fox. “And we will repeatedly swoop through the corona, making these measurements. So why has it taken us 60 years to be able to do it? Because honestly [until now] the materials didn’t exist to allow us to be able to do it.”

Using cutting-edge technology and engineering expertise, the team built a carbon-composite heat shield 4.5 inches thick to protect the science instruments. Getting the heat shield right was critical to achieve the mission’s objectives, as corona temperatures can reach several million degrees. While the probe won’t get that hot, it will be forced to operate in regions where the temperature runs 2,500 degrees Fahrenheit. Protected by the shadow of the heat shield, the four science instrument suites will remain at about room temperature. The instruments will conduct in-situ measurements to obtain data on magnetic fields as well as plasma and energetic particles, and will image solar wind.

The Parker Solar Probe is currently being built and tested at the APL. Instrument integration is expected to be completed by the end of the summer. By late 2017, the spacecraft will move to Goddard Space Flight Center (GSFC) for final testing, which includes tests in the thermal environment to ensure the vehicle and its instruments can operate as expected in the extreme temperatures near the sun. Eventually, the spacecraft will be sent down to Florida for launch.

Before it leaves Earth, the probe will be equipped with a microchip featuring an image of Dr. Parker as well as a copy of his 1958 paper on solar wind.

NASA Associate Administrator for the Science Mission Directorate (SMD) Thomas Zurbuchen noted, “NASA has named about 20 spacecraft after distinguished researchers like Hubble, Chandrasekhar, and Fermi.” He added, “However, NASA has never named a spacecraft after a researcher during their lifetime.”

“I’m certainly greatly honored to be associated with such a heroic scientific space mission,” said Parker, who serves as the S. Chandrasekhar Distinguished Service Professor Emeritus in the Department of Astronomy and Astrophysics at the University of Chicago.

He added, “As a theoretician, I greatly admire the scientists and engineers whose patient efforts together converted the solar probe concept into a functioning reality ready to do battle with the solar elements as it divulges the secrets of the expanding corona.”

The Parker Solar Probe is part of NASA’s Living with a Star program, which explores aspects of the sun-Earth system that directly affect life and society. The Living with a Star flight program is managed by GSFC for the SMD. The JHU APL, which manages the mission for NASA, is designing and building the spacecraft and will operate it as well.

Watch a video about the Parker Solar Probe mission.