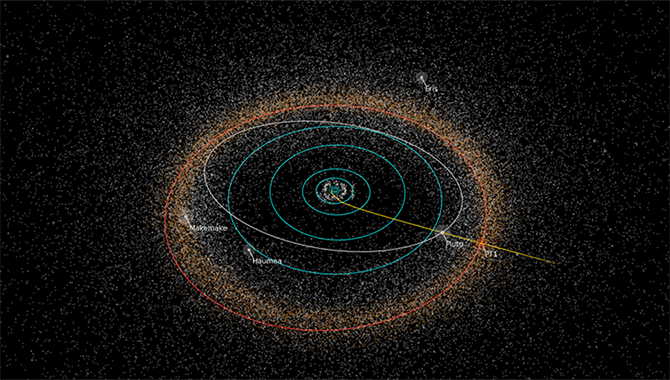 This image depicts the potential path New Horizons will take to reach its next target in the Kuiper Belt: 2014 MU69.

New Horizons plans to cap its first-ever flyby of Pluto with an even more far-reaching goal: a close flyby of a small Kuiper Belt object (KBO).

After traveling more than three billion miles through space, on July 14, 2015, NASA’s New Horizons spacecraft became the first mission to explore Pluto. Discovered in 1930, Pluto is one of the largest bodies in the Kuiper Belt, which is considered the third zone of the solar system. Located far beyond the terrestrial planets and the gas giants, the Kuiper Belt contains hundreds of thousands of small, icy bodies that are relics from the era of planetary formation.

During its Pluto flyby, the New Horizons spacecraft captured data that delivered extraordinary insight into this little-known region of the solar system. “One thing that we discovered is that small planets can be just as complex as big planets. And that really blew away our expectations. We did not think that a planet the size of North America could be as complex as Mars or as the earth, and yet that’s what we found,” said Alan Stern, New Horizons principal investigator at Southwest Research Institute (SwRI), during a Facebook Live discussion.

He added, “We also found that Pluto is geologically alive even today. That it’s making new surface units. And that there are glacial flows and other kinds of activity on the surface that we didn’t think could happen on a small planet billions of years after its formation. We thought it would have cooled off by then and run out of energy. But, in fact, it hasn’t. Those two discoveries really changed the paradigm in planetary science and whet our appetite for future exploration of the Kuiper Belt.”

To capitalize on having a healthy spacecraft operating in the outermost reaches of the solar system, in 2016 NASA approved a mission extension for New Horizons. This time, the spacecraft will fly past a much smaller KBO called 2014 MU69. Orbiting nearly a billion miles beyond Pluto, MU69 was selected for its interest to the science community and its potential to reveal unprecedented information about the early solar system.

“Pluto is the gateway to the Kuiper Belt,” said Kelsi Singer, New Horizons co-investigator at SwRI. “These smaller objects we think are probably more pristine and primordial, and so we’re going to learn about the building blocks of the solar system by going there.”

Despite the distance between Pluto and MU69, the New Horizons spacecraft is ready for the journey. “The spacecraft is about 400 million miles beyond Pluto and some 3.5 billion miles from Earth. And it’s doing just fine. All the systems aboard are working, we have plenty of power to continue the mission through the Kuiper Belt flyby,” said Glen Fountain, New Horizons program manager at the Johns Hopkins University Applied Physics Laboratory (APL). The team expects the spacecraft to operate until the mid-2030s, barring any unexpected encounters enroute to or from MU69.

For the Pluto flyby, the team was concerned that there could be rings or debris in orbit around the planet that might present serious collision hazards. To mitigate that risk, they searched for—and found—a clear path through the Pluto system. For the MU69 flyby, said Stern, “we’re going to do the same thing. We’re going to take the same precautions as we fly up to MU69 in December of 2018—just late next year, in fact—looking for hazards that might be there, whether they’re satellites or rings or other kinds of dust structures. And we will have preplanned, in our pocket, a back-up trajectory and a back-up flyby that will still accomplish almost all the science but let us divert out of the way if that’s something that we find that we need to do just because of safety concerns for the spacecraft.”

“[F]rom the measurements that we’ll take, we’ll be able to learn about their shapes, their rotation periods, and their surface properties. And that’ll be a first. Because this is the first time we’ve had essentially an astronomical observatory in the Kuiper Belt looking at objects that are too faint to study…from the earth,” said Stern.

To arrive on target at MU69 on January 1, 2019, the team has already executed a series of trajectory-correction maneuvers. “As we learn more about the orbit on MU69 and know exactly where we need to head, we’ll execute some more of these maneuvers—possibly as many as ten,” said Winters.

During the MU69 flyby, the spacecraft will take both black and white and color images as well as stereo images to assess the elevation of surface features. “By the time we actually get to our closest approach to the object, which will be possibly as close as 3,000 kilometers, we will be able to see features on the surface of MU69 that are about the size of buildings,” said Singer.

By April 2017, New Horizons will be halfway to its encounter with MU69. The team has already made history once by completing the initial exploration of solar system planets. On January 1, 2019, nearly a million deeper into the Kuiper Belt than it was during the Pluto flyby, they will make history yet again.

New Horizons is part of the New Frontiers Program, which is managed by Marshall Space Flight Center (MSFC). The APL designed, built, and operates the spacecraft and manages the mission for the Science Mission Directorate (SMD). SwRI leads the science mission, payload operations, and encounter science planning.

Read an APPEL News article about the New Horizons flyby of Pluto.