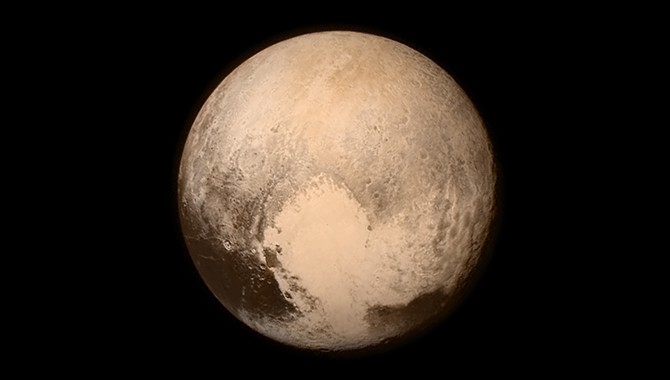 Taken on July 13, 2015 by the New Horizons Long Range Reconnaissance Imager (LORRI), this image prominently features Pluto's "heart" feature, which is approximately 1,000 miles wide. Color was added from a separate image taken on the same day by the spacecraft's Ralph instrument.

Ten days before its groundbreaking Pluto flyby, something went wrong on the New Horizons spacecraft. But it will take more than an anomaly to derail this mission.

“This is really a historic time. But it’s also one fraught with many decisions and challenges that come up along the way,” said Jim Green, director of Planetary Science at NASA.

Until Saturday, July 4th, the New Horizons spacecraft had proceeded relatively smoothly from its launch more than nine years ago to its current position: poised on the edge of making history as the first flyby to reveal this previously unseen world. But on Saturday, everything changed for a tense ninety minutes as members of the New Horizons team abandoned their holiday plans to race to the Johns Hopkins University Applied Physics Laboratory (APL) in Laurel, MD, in order to determine what had occurred and how to fix it.

It started on July 3rd. The team was preparing for what they call the “main event”: the closest encounter with Pluto and its moons, which will occur on July 14th. They had started loading the commands that will tell the spacecraft how to behave in order to obtain the critical observations that the New Horizons team—and the world—has been waiting for since they began architecting the mission in 2001.

“We actually load the command load—those commands that are sequenced to get all the observations from the 7th of July through the encounter on the 14th and then on through the 16th—into a single command load,” said Glen Fountain, New Horizons project manager. “It’s quite complex. We put it not only on the primary computer, but we also put it up on the backup computer.”

The command load was added to the backup computer on July 3rd. On the 4th, the team began loading it onto the primary computer while simultaneously compressing a large amount of existing data on the spacecraft’s computer to be downlinked later. Compressing this data would free up the majority of the system to record the important observations during the upcoming encounter with Pluto.

“The computer was trying to do these two things at the same time,” said Fountain. “The two were more than the processor could handle at one time. So the processor says, “I’m overloaded.” Then the spacecraft did exactly what it was supposed to do. [The] autonomy system switched to the backup computer and…went safe. At that point, we lost the downlink from the primary side of the spacecraft because it had switched to the secondary side.”

New Horizons’ autonomy engineer was quickly on the job and knew to begin looking for a signal on the backup side. That signal came through as expected and the spacecraft was found in safe mode, in which it sends a low-bit signal back to Earth, alerting ground controllers to intervene because something has gone awry. The team looked at the data, realized what had happened, and conceived a plan to recover.

“That plan was put in place, it’s been executed, [and] the command load has been put back on the primary side,” said Fountain.

Green commended the performance by the New Horizons team in bringing the spacecraft back to its timeline. “All planetary spacecraft have had problems,” he said. “But when these anomalies occur, we just kick in our processes. What happened in our own flash memory is a concern, but then we know what to do next. And the team has just been really methodical. They’ve done an outstanding job.”

The team does not expect anything like this to occur in the days leading up to the flyby. “These events that came together—both the compression that was of a lot of data and a burn to flash—those two events will not happen concurrently again,” said Fountain. Furthermore, the spacecraft has been in encounter mode—the mode it will remain in between July 7th and July 16th—many times before as practice for the “main event,” so the team is familiar with how things will proceed. Even if something does go wrong, they have more than 200 contingency plans to ensure they’re prepared to handle whatever comes their way.

Once in encounter mode, the spacecraft won’t rely on ground control to solve problems, as it did on July 4th. Instead, its processor will reboot and return to the planned timeline, an activity that takes about seven minutes. No critical observation will be jeopardized if this happens, thanks to a carefully planned duplication of all observations, which are separated by at least seven minutes.

Science data collection was put on hold while dealing with the anomaly, but resulted in very little loss of scientific product. “When the spacecraft goes safe, the instruments are turned off and the science that we were doing was suspended. In fact, throughout the recovery, which is normal, we don’t collect any science. We’re keeping our eye on the ball to make sure that the spacecraft is healthy, to get it back configured the way it should be for entry into the nine-day flyby sequence,” said Stern. “We’re very much looking forward now to getting back, beginning tomorrow, with the data collect.”

The best, everyone agreed, lies ahead. “For a first flyby reconnaissance, we’re going to knock your socks off,” said Stern. “And we’re going to keep doing it straight through 2015 and through most of 2016,” because the enormous amount of data collected during the flyby will continue to be returned over that time frame.

Long before then, the team—along with the rest of the world—will celebrate New Horizon’s extraordinary achievement: the first-ever exploration of the Pluto system on July 14, 2015.