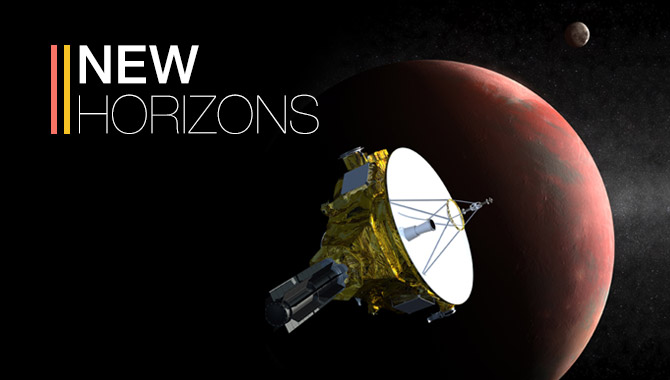 Like NASA’s Gravity Probe B and Kepler spacecraft, the New Horizons mission to Pluto was a long time in the making, overcoming many obstacles before ever leaving the launch pad.

The latest NASA History Office lecture featured keynote speaker Dr. Mike Neufeld, a curator at the Space History Department at the National Air and Space Museum, on the genesis of NASA’s New Horizons mission to Pluto. “This story in particular is especially complicated,” said Neufeld. NASA’s first mission to Pluto endured several cancellations and name changes since the agency’s first discussions about exploring it in the 1960s.

Momentum for a mission to Pluto increased with the organization of an informal group called the “Pluto Underground.” Founded by Dr. Alan Stern and some of his other colleagues over dinner in 1989, they sought to serve as Pluto mission advocates within the NASA and scientific communities, explained Neufeld. It wasn’t until 2001 when then-Associate Administrator of NASA’s Science Mission Directorate Ed Weiler wrote the official award letter announcing the New Horizons mission. Stern would serve as the mission principal investigator (PI).

“It was one of the most difficult letters a PI has ever gotten,” said Neufeld. The team was allowed to proceed as long as they adhered to a few conditions. The first among them was that the mission didn’t have an official budget—and wouldn’t receive one until 2003. With the launch window quickly approaching, the New Horizons team had their work cut out for them to make their launch deadline in January 2006.

Among the many challenges the mission endured, perhaps the most critical one materialized in September 2005. Just four months before the scheduled launch date, the mission’s Atlas V launch vehicle experienced a failure during a qualification test of its Rocket Propellant 1 tank. With a narrow launch window and the mission’s high visibility due to the presence of a nuclear payload, the mission team and NASA leadership was faced with a tough decision process that tested the agency’s revised governance model. (Read the full APPEL case study.)

Despite the challenges the mission faced, New Horizons successfully launched on January 17, 2006. The spacecraft is expected to reach Pluto in July 2015.

Neufeld presented his talk at NASA Headquarters, which was broadcast to the agency online and enabled participants to ask questions. Past lectures have included speakers such as Dr. Harry Lambright on the politics of Mars and Dr. Wesley Huntress on Soviet robotic lunar and planetary exploration. Learn more at history.nasa.gov.

Artist’s concept of the New Horizons spacecraft as it approaches Pluto and its largest moon, Charon, in July 2015. The craft’s miniature cameras, radio science experiment, ultraviolet and infrared spectrometers and space plasma experiments will characterize the global geology and geomorphology of Pluto and Charon, map their surface compositions and temperatures, and examine Pluto’s atmosphere in detail. The spacecraft’s most prominent design feature is a nearly 7-foot (2.1-meter) dish antenna, through which it will communicate with Earth from as far as 4.7 billion miles (7.5 billion kilometers) away.