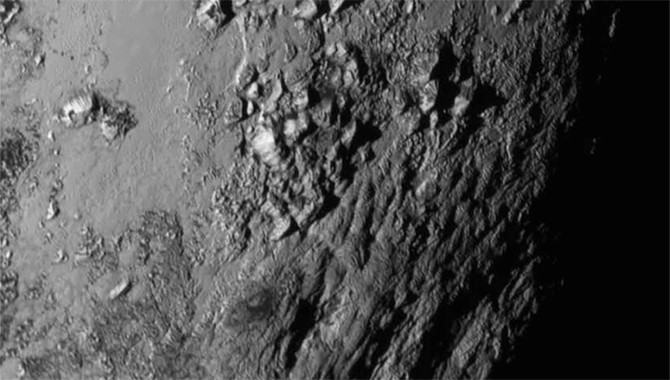 Close-up image of Pluto’s surface reveals mountains that the team believes are composed of a bedrock of water ice and formed no more that 100 million years ago.

With its historic Pluto flyby, the New Horizons mission ushers in a new era of solar system exploration that may have implications for worlds closer to home.

On July 14, 2015, the New Horizons spacecraft completed its groundbreaking flyby of the Pluto system. The spacecraft made its closest approach just before 7:50 a.m. EDT, but its success was not confirmed for about 13 hours when it completed a planned “phone home” to tell the New Horizons team that it had passed through the system and collected the expected quantity of data.

“Once again, we’ve achieved a historic first,” NASA Administrator Charlie Bolden told an audience that included the extended New Horizons team, family, friends, and media. “[W]ith this mission, we have visited every single planet in our solar system.”

Alan Stern, New Horizons Principal Investigator at Southwest Research Institute (SwRI) in Boulder, Colorado, put the event in the context of NASA’s past accomplishments. “Following in the footsteps of legendary projects by NASA called Mariner, Pioneer, and Voyager, New Horizons has succeeded at completing the capstone to the historic first era of planetary reconnaissance.”

The efforts of the team were applauded by New Horizons Project Manager Glen Fountain as well. “They have done it all, from the day we started building this spacecraft in a schedule that most people thought was not possible, got it launched, and now have flown it across the solar system to reach the goal.” He made a point of calling out the contributions of Mission Operations Manager Alice Bowman whom, he said, “guided the spacecraft across the solar system.”

“Inspiration like that provided by New Horizons will keep interest and enthusiasm strong for the next generation to make their own giant leaps,” said Bolden. “Today, we’ve truly—once again—raised the bar of human potential. Let the journey of discovery continue.”

New Horizons has already begun to discover unexpected facts about the third zone of the solar system. Images taken during the flyby indicate that Pluto has mountains that rival the Rockies, Charon’s surface is far younger and more varied than expected, and Hydra’s surface is surprisingly large.

Perhaps one of the most exciting discoveries concerns the surface of Pluto: a preliminary image did not show impact craters in the “heart” region of the dwarf planet. “This means this is a very young surface,” said John Spencer, New Horizons Co-Investigator at SwRI. He added, “We think it has to be probably less than 100 million years old, which is a small fraction of the four-and-a-half-billion-year age of the solar system.”

The geological activity that could produce a young surface on an icy world has traditionally been attributed to tidal heating generated by orbiting a large planet. But this can’t be the case for Pluto. “There is no giant body that can be deforming Pluto on an ongoing, regular basis to heat the interior. Charon is just too small to do that. So this is telling us that you do not need tidal heating to power ongoing, recent geological activity on an icy world,” said Spencer. “That’s a really important discovery.”

Over the next 16 months, New Horizons will continue to return high-resolution images that spur new insight into the third realm of the solar system. But as it initiates this new chapter of discovery, it may also rewrite history closer to home.

“We now have an isolated, small planet that’s showing activity after four and a half billion years,” said Stern. “I think it’s going to send a lot of geophysicists back to the drawing boards.”

Watch a video of the New Horizons team reacting to the news that the spacecraft “phoned home” as planned at about 9:00 p.m. on July 14, 2015.

Read an APPEL News article about how the New Horizons team addressed an unexpected anomaly just 10 days before the flyby.