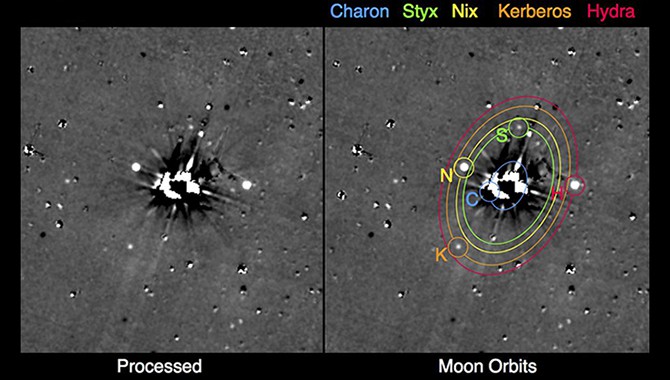 : Taken from 47 million miles away, these images were the first set taken by the New Horizons spacecraft itself in a search for potentially hazardous material around Pluto that could interfere with the flyby on July 14. Fortunately, the observations did not reveal any cause for a change in trajectory.

Nearing its closest approach to Pluto, the New Horizons spacecraft is returning novel observations about the mysterious third zone of the solar system.

Discovered in 1930, for many decades Pluto was believed to be the ninth planet, circling far beyond Neptune. But it behaved differently than its solar system peers. It wasn’t as large as Uranus or Neptune, and had an eccentric loop that took it, at times, inside the orbit of Neptune. It wasn’t until telescopic capabilities advanced in the 1990s that the true nature of Pluto and its region were revealed.

“There’s a whole new third zone of the solar system beyond Neptune,” said Bill McKinnon, New Horizons Co-Investigator. “In some ways, the Kuiper Belt is like the asteroid belt. The asteroid belt’s inside Jupiter; the Kuiper Belt’s outside Neptune. But there’s a thousand times more stuff outside Neptune. And the best part is that, amongst all these hundreds of thousands or millions of bodies, are big worlds. Big in a relative sense. They’re small planets. Pluto is actually the biggest of these as far as we know, and there are several others. It’s an entirely new solar system in a way.”

Learning more about Pluto and the Kuiper Belt is exciting from the standpoint of pure scientific discovery, but it also has relevance to Earth. Fran Bagenal, New Horizons Co-Investigator, described the objects in the Kuiper Belt as “remnants of the formation of the solar system.”

“It really tells us about how our world, our solar system, formed and how it got to be the way it is,” she said.

“Pluto is a very complicated world. It has an atmosphere—it’s actually an atmosphere that’s slowly leaking off into space. We’re going to probe this atmosphere in every way we can with our instruments,” said McKinnon, “and learn about this fundamental process that affected the early earth: atmospheric escape.”

Now less than 10 million miles away from Pluto, the observations sent back by New Horizons are revealing aspects of the dwarf planet and its moons that are unlike anything humans have seen before.

Cathy Olkin, New Horizons Deputy Project Scientist, concurred. “There are features on Pluto that [are] coming into sharper and sharper focus. We see a bright region on Pluto’s north pole. It might be a polar cap.” The emerging information is exciting and affirming to the mission science team, which spent a long time debating when to fly past Pluto and which hemisphere to study. “We’re all really excited we chose this hemisphere,” said Olkin, as observations suggest it offers intriguing elements that are becoming more evident with each day.

Pluto isn’t the only object coming into sharper focus. “We see a dark region in Charon’s pole, which is surprising to me,” said Olkin. “A lot of times, on polar regions you see bright features—like we do on Pluto, and Mars, and Earth, where you have a bright polar cap. But this region is dark compared to the rest of the surface.”

Positioning the spacecraft to capture these unique images isn’t simple. First, the science team defines what kinds of observations are needed. Then the mission operations team works closely with others—including those involved in mission design, navigation, guidance and control, and instrument analysis—to develop a set of commands that will position the spacecraft to return the optimal observations.

“This is really like a dance: you have to have all those observations intertwined with the spacecraft commands,” said Bowman. “We can’t just take science—we have to turn and look to Earth and communicate with Earth [to] bring back that science data. It’s kind of a push and pull: where you take science and where you turn back and communicate with Earth.”

While each new day elicits groundbreaking observations of Pluto, Charon, and the rest of the system, the mission operations team is now looking firmly ahead to the day of closest approach: July 14. “We’re going to be putting up the flyby sequence onboard the spacecraft in the next couple days to both the primary and the backup computers,” said Bowman. Finally, nine years after launch, New Horizons is poised to reveal secrets of the universe to everyone waiting back on Earth.

Find out how the Hubble Space Telescope is helping New Horizons safely fulfill its mission.