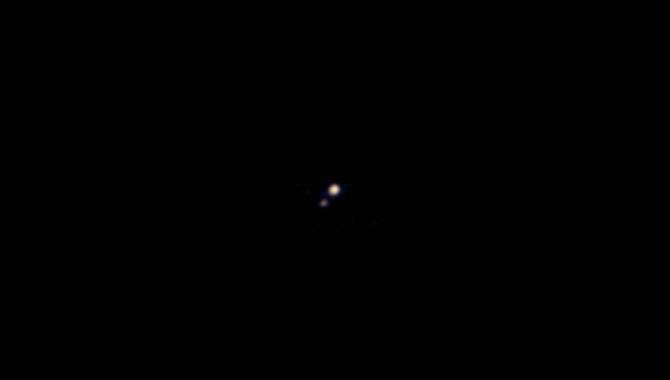 The first color image of Pluto and its largest moon, Charon, taken by the News Horizons spacecraft when it was still 71 million miles away.

After traveling more than 3 billion miles through space, NASA’s New Horizons spacecraft is the first mission to explore the farthest reaches of the solar system.

“This is an amazing and fundamental change in our view of the solar system,” said Alan Stern, New Horizons principal investigator. “Before the ‘90s, we didn’t even know that this third zone of the solar system existed. We knew about the inner zone of the terrestrial planets. And we knew about the giant planets: what we now call the middle solar system. But this new third zone […which is] a relic from the era of planetary formation, has so much new to teach us. It is the largest structure in the planetary system, containing comets, …containing the building blocks of small planets, and small planets—not just Pluto, but others as well.”

A member of the newly discovered third class of planets in the Kuiper Belt, Pluto is actually a binary planet: a pair of objects that orbit each other and are similar in mass. Its largest moon, Charon, forms the other half of the binary. While the Kuiper Belt consists of thousands of small, icy objects that formed early on in the history of the solar system, Pluto is the brightest and largest.

Since it was first identified, NASA has sought to learn more about the Kuiper Belt. Mission concepts began in 1990 but it wasn’t until 2002 that the New Horizons team began designing, building, and testing a spacecraft that could successfully make the journey and return groundbreaking information. In 2006, New Horizons launched.

“This is a small, compact, highly advanced spacecraft,” said Stern. Now, nine years after launch, the piano-sized vehicle is ready to explore Pluto and the surrounding environment. “It’s full of fuel and it’s carrying a scientific arsenal of seven instruments that are, combined, the most powerful suite of scientific instruments ever brought to bear on the first reconnaissance of a new planet. Nothing like this has been done in a quarter century and nothing like this is planned by any space agency ever again.”

The extraordinary technology involved is a tribute to the engineers who worked on the mission, Stern said. “If you weighed all seven instruments aboard New Horizons, the combined weight…is less than just the camera on the Cassini Saturn orbiter. And if they were all running at once, they would draw only 28 watts—about half a standard 60-watt light bulb.”

New Horizons is expected to make its closest encounter with Pluto in mid July, but it will begin returning images that feature unprecedented clarity as early as May. “And it’s going to get better every day from there,” said New Horizons deputy project scientist Cathy Olkin. “Every day we travel almost a million miles closer to Pluto. So it’s going to be really exciting. Each day is going to reveal something new.”

The mission represents a series of firsts for NASA and the scientific community: the first spacecraft to explore the Pluto system, the first to examine a binary planet, and in 2006 it was the fastest spacecraft ever launched. It will also be the first time since the Voyager spacecraft flew past Jupiter and Saturn that people on Earth get to glimpse a new world for the very first time.

James Green, director of Planetary Science at NASA, agreed. “It’s one of the most exciting steps that we can take.”

Watch a video about Pluto and the New Horizons mission.