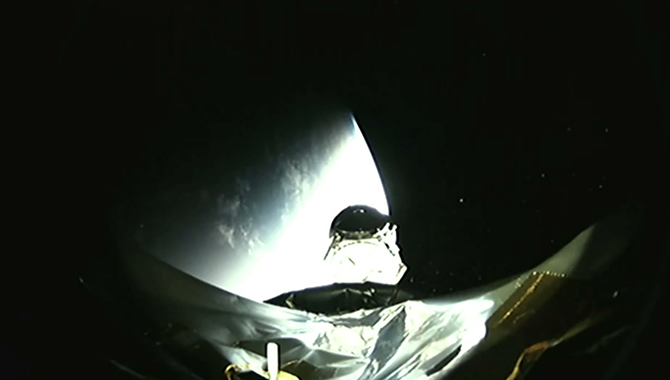 Image, captured by an onboard camera, of TESS separating from the SpaceX Falcon 9 booster.

On April 18, 2018, NASA’s Transiting Exoplanet Survey Satellite (TESS) rocketed away from Cape Canaveral, Florida, to accelerate the agency’s search for life beyond Earth.

Since 2009, NASA has relied primarily on the Kepler mission—and its follow-on effort, K2—to seek out exoplanets: worlds orbiting stars outside of our solar system. Kepler has kept watch over roughly 150,000 stars, using the “transit method” to pinpoint planets orbiting these stars. The mission looked for periodic dips in the brightness of a star that could indicate a planet moving in front of it. Once such a “planet candidate” was observed, the next step was to confirm that it was a planet and not a false positive, also called an astrophysical imposter. In total, the mission identified more than 2,600 confirmed exoplanets, including 30 in the “Goldilocks” or habitable zone. Planets in this zone are less than twice the size of Earth, presumed to be rocky, and orbit their stars at a distance that implies liquid water could exist on the surface. Altogether, these signs indicate that a planet might harbor the potential for life.

TESS is the first new planet hunting mission from NASA to launch in nearly a decade. The mission will use the same transit method as Kepler to identify exoplanet candidates, but with two important differences. First—in contrast to Kepler, which observed a single star field in the Cygnus constellation—TESS will conduct a broad survey, observing 85% of the sky. Second, the mission will deliberately seek out 200,000 of the brightest and closest stars to search for exoplanets. Kepler’s target stars were far away—300 to 3,000 light years from Earth—and relatively dim, making it hard to conduct follow-up studies using ground-based telescopes. TESS targets will be less than 300 light years from Earth and 30 to 100 times brighter than those of Kepler. This will make it easier for researchers to learn more about the masses, densities, and atmospheric compositions of any identified exoplanets, all of which will help scientists determine whether these worlds exhibit the right conditions to potentially support life.

“TESS forms a bridge between what we’ve learned about exoplanets to date to where we’re headed in the future,” Jeff Volosin, TESS project manager at Goddard Space Flight Center (GSFC), speaking before the launch. “A really big part of the mission is to enable future exploration by providing a giant dataset, all over the sky, of where these exoplanets are—the ones that are closest to Earth and brightest for follow-up observations—with the hope that in the next decades we’ll be able to identify the potential for life to exist outside the solar system.”

Four wide-field cameras enable TESS to observe the full sky. The mission’s field of view has been divided into 26 sectors, each 24 degrees by 96 degrees across. TESS will scrutinize each sector for at least 27 days. The first year of the mission will focus on 13 sectors in the southern sky, while the second year will concentrate on 13 sectors in the northern sky.

TESS is expected to identify thousands of exoplanet candidates. Next, ground-based observations of those candidates will be performed to confirm that they are indeed planets and not false positives. Then space-based missions, such as the upcoming James Webb Space Telescope and Wide Field Infrared Survey Telescope (WFIRST), will further characterize the planets, including studying their atmospheres for biological signatures that indicate life.

To achieve its goals, TESS will be inserted into a highly elliptical, stable, lunar-resonant P/2 orbit. This orbit takes the spacecraft far above the geosynchronous orbit used by commercial satellites. At its lowest point, TESS will be roughly 67,000 miles from Earth. At its apogee, TESS will soar 232,000 miles above the planet, far beyond the dangers posed by the Van Allen radiation belts. TESS will follow a 13.7-day orbit around Earth. In order to reach its operating orbit, the spacecraft will perform a lunar flyby in May, roughly a month after launch, for a gravity assist that will propel it into place by mid-June.

“The lunar encounter is a few thousand kilometers above the surface. [The SpaceX Falcon 9] will put us into this highly elliptical, almost geotransfer-like orbit, but there will be a number of propulsive maneuvers that we make before we target exactly on that flyby,” said Robert Lockwood, TESS Spacecraft Program Manager at Orbital ATK.

TESS will begin collecting data approximately 60 days after launch. After that, the mission will lead the way in identifying new worlds throughout the universe and expanding the potential for finding life beyond Earth.

“TESS will find thousands of exoplanets outside our solar system around nearby stars so that we can search for the ingredients and possible signs of life in conjunction with our other missions,” said Sandra Connelly, deputy associate administrator of programs for NASA’s Science Mission Directorate (SMD). “TESS will hopefully find the nearest of our exoplanet neighbors—those that may be visited in the distant future when humans leave our solar system for the stars.”

The Explorer-class mission is led and operated by MIT and managed by GSFC. Principal investigator George Ricker is from MIT’s Kavli Institute for Astrophysics and Space Research. The four wide-field cameras were developed by MIT’s Lincoln Laboratory. Additional partners include Orbital ATK, Ames Research Center, the Harvard-Smithsonian Center for Astrophysics, and the Space Telescope Science Institute.

Learn more about the transit method used to spot exoplanets in this video.

Visit the TESS website to discover more details about the mission.

Read an article about the final catalog of findings from the Kepler mission.