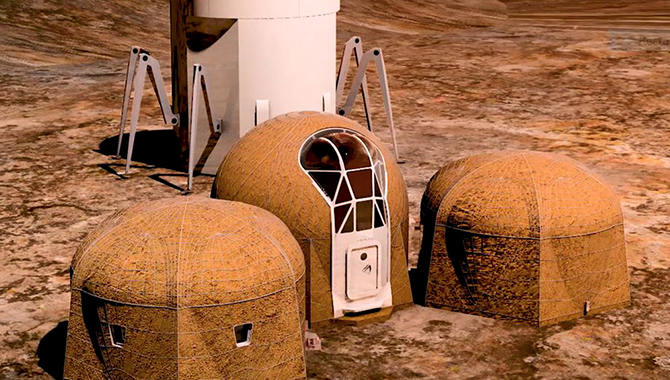 The Team Zopherus features a modular design and large windows for natural light.

The drive to send humans to Mars will stretch the boundaries of science and engineering. NASA is concurrently developing the Orion spacecraft and the deep space rocket Space Launch System (SLS) to take humans deeper into space than ever before.

With current technology, a human space flight to Mars is likely to take about nine months. After this long journey in a confined space, habitat for astronauts will be crucial. One of the most innovative ideas being explored to meet this need is additive manufacturing, more commonly know as 3D printing. Researchers are developing a type of sulfur concrete using simulated regolith from Mars. Such a concrete would dry in a few hours, be as strong as the best concretes on Earth, and be corrosion-resistant.

To advance this technology, the Centennial Challenges program of the NASA’s Space Technology Mission Directorate (STMD) developed the 3D-Printed Habitat Challenge. This competition directly engages the public in advancing the 3D printing technology needed to build sustainable shelters on the Moon and Mars from indigenous resources and recyclable materials.

The competition is now in the third phase, the On-Site Habitat Competition. In the first two levels of this phase, the teams design a structure and the integral life support systems in a Building Information Modeling (BIM) software environment. Later they will autonomously 3D print components and finally a one-third scale version of their habitat. Teams are competing for a portion of a $2 million prize purse.

Recently, NASA and partner Bradley University of Peoria, Illinois selected the top five teams for the first level of the competition, according to Monsi Roman, program manager for NASA’s Centennial Challenges. The winners split a $100,000 prize purse based on scores from a panel of subject matter experts from NASA, academia, and industry.

“Some of these designs are incredible,” Roman says. “The concepts are amazing. They are not just designing structures, they are designing habitats that will allow our space explorers to live and work on other planets. It’s hard for the public to grasp the complexity of our missions and I think these designs can show that in a way that’s very real.” 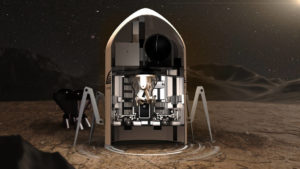 The winner of level one, Team Zopherus, began with a printer sized to fit inside the cargo faring of a one of NASA’s current rockets capable of reaching Mars, according to Corey Guidry, a team member. “That led to a very specific size and shape of our habitat. …We also developed a design which can construct a fully functional habitat using a single delivery vehicle.”

Their design utilizes a mobile printer to produce modular units, Guidry said. “As more room is needed to accommodate the astronauts, the re-usable printer can simply print another module. The design uses concrete from Martian regolith, printed within a pressurized chamber to protect it from the dramatic temperature changes and dust storms of Mars as it cures.

“Another construction challenge was the lack of overhead support structures and form work to cast the concrete,” Guidry noted. To solve this, the team proposes a dual printer head, with one placing a thin layer of high-density polyethylene, which could provide a type of shelf to support overhang while printing overhead structures.

Empathizing with the challenges astronauts will face on Mars, confined to a small habitat, surrounded by a deadly extraterrestrial environment, the team “tried to imagine how lonely and homesick someone may feel after months of such isolation.”  To address this, the main module contains a large oculus window, allowing for natural light, which would also support a hydroponic garden.

The second place team, Al.SpaceFactory noted that their design, MARSHA, was “largely about finding the balance between efficiency and awe,” said team member Jeffrey Montes. “Our layout responds to both the imagined flow of mission activities and the creation of flexible, open and healthy spaces.”

The team from Northwestern University, which finished fifth, noted that their greatest design challenge was the use of interior space. “We had a uniquely difficult interior volume to divide and allocate in such a way that astronauts would feel comfortable and at home,” said team member Matthew Troemner. It was only after they grouped furniture by required ceiling height, that a habitat of communal gathering and exercise spaces with very high ceilings, and sleeping and storage spaces with minimal head clearance, emerged.

Roman said that this is the first NASA Centennial Challenges project that includes an artistic element, through architectural design of the habitats. This has helped the competition garner greater media exposure, capturing both the public imagination and the attention of venture capitalists seeking to disrupt building construction on Earth. Consequently, even teams who do not win prize money gain valuable public exposure for their designs and engineering.

“The building of a structure using regolith from the surface of Mars is not easy,” Roman notes. “It’s not even easy on Earth. And having to do all of this autonomously, without the aid of humans in the beginning, makes it have extra complexity.”

For instance, on Earth, 3D printing nozzles can clog after periods of disuse. When that nozzle is on an autonomously operated printer, a nine-month rocket journey into deep space, clearing that clog presents a much greater challenge.

“In the end, I asked suspect habitats on Mars are going to be hybrids,” Roman says, with some prefabricated components arriving on rockets, some 3D printing, and perhaps conventional block construction. “The truth is, that if there is a failure, you want to have as many options on the surface as you can.”

In the next level of the competition, the teams will develop a more complete package of information and BIM models. The competition will culminate in construction levels, in which the teams autonomously 3D-print elements of the habitat, then finally a one-third-scale printed habitat.