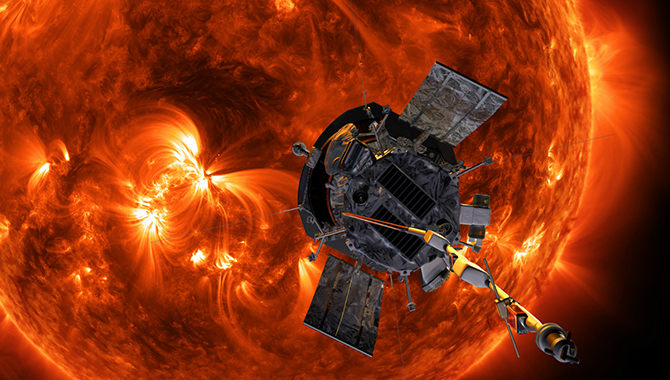 The Parker Solar Probe reaches the Sun, OSIRIS-REx finds hydroxyls on Bennu, and still no contact from Opportunity.

NASA’s current missions are pushing the boundaries of engineering and expanding scientific understanding of our solar system. Here are some updates:

The Parker Solar Probe, which launched August 11, has reached the Sun and completed the first of 24 planned petal orbits through the harsh atmosphere of the corona. The probe reached a stunning 213,200 miles per hour, the fastest speed ever recorded by a spacecraft. The probe also flew within 15 million miles of the Sun’s surface, which is closer than any spacecraft has ever flown to the Sun.

Those records are not destined to stand for long, however, as the spacecraft will eventually reach a peak speed of 430,000 miles per hour and fly within 3.83 million miles from the Sun’s surface.

The probe team received welcome news when the spacecraft sent a status update following the perihelion, indicating the probe was in “A” status, with all equipment operating as designed, collecting data. This means the probe’s highly autonomous system of sensors and controls, coupled with its high-performance heat shield, worked as designed to protect the spacecraft as it flew through the corona.

“Parker Solar Probe was designed to take care of itself and its precious payload during this close approach, with no control from us on Earth — and now we know it succeeded,” said Thomas Zurbuchen, associate administrator of NASA’s Science Mission Directorate at the agency headquarters in Washington.

The probe has sent back early data, which will increase scientific understanding of the Sun.

OSIRIS REx is performing a series of flybys of the asteroid Bennu to better determine its mass.
Credit: NASA

NASA’s OSIRIS-REx spacecraft has now reached Bennu, an asteroid roughly 0.3 miles in diameter, which has 1-in-2,800 odds of impacting Earth between 2175–2199. The spacecraft is performing a series of flybys over the asteroid’s poles and equator, coming as close as 4.4 miles. This survey will enable scientists to more accurately determine the asteroid’s mass.

Understanding the asteroid’s mass is important because the team needs to know Bennu’s gravitational pull before they insert Osiris-REx into orbit around it on December 31. It is the smallest object NASA has ever attempted to orbit.

Already, OSIRIS-REx spectrometers have sent back valuable data indicating there are hydroxyls—molecules that contain oxygen and hydrogen atoms bonded together—that exist in clay minerals throughout the asteroid. This likely indicates that Bennu was once part of a larger asteroid that contained liquid water.

“The presence of hydrated minerals across the asteroid confirms that Bennu, a remnant from early in the formation of the solar system, is an excellent specimen for the OSIRIS-REx mission to study the composition of primitive volatiles and organics,” said Amy Simon, OVIRS deputy instrument scientist at NASA’s Goddard Space Flight Center in Greenbelt, Maryland.

After orbiting Bennu, the team will select a sample site and the spacecraft will briefly make contact via a sampling arm, which will touch the surface and release a burst of nitrogen gas. This will loosen and raise rocks and surface material, which will be captured in a sampler head. The spacecraft can make three collection attempts and can capture 2,000 grams of material. The spacecraft’s Sample Return Capsule (SRC) will return the sample to Earth, landing in the Utah desert.

“When samples of this material are returned by the mission to Earth in 2023, scientists will receive a treasure trove of new information about the history and evolution of our solar system,” said Simon 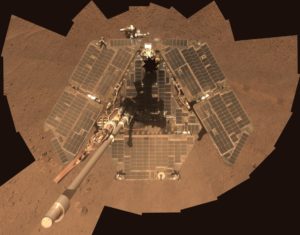 NASA is continuing attempts to make contact with the Opportunity Rover, which was forced into a deep sleep mode during a massive dust storm that engulfed Mars earlier this year. There has been no response from the rover to engineers’ commands, nor has the rover attempted to make contact as it is programmed to do.

The storm grew very quickly and eventually set a record for the opacity of the dust cloud it generated at 10.8 tau. In recent months, that has dropped back to 1.5, a level that would enable Opportunity’s solar panels to generate electricity and recharge its batteries.

Opportunity has been incredibly resilient during its time on Mars, entering its 15thyear of what was to be a mission of 90 Martian days. The team is hopeful that the windy season on Mars, which begins in November and extends through January, will blow away any dust that has settled on the Rover’s solar panels.

The team will reassess Opportunity’s future in January.