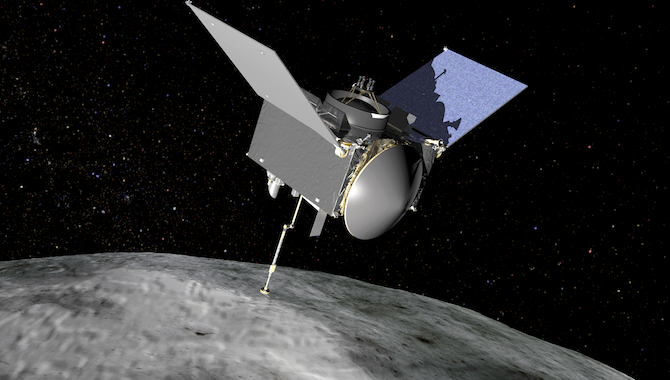 This artist’s conception shows the OSIRIS-REx spacecraft extending its sampling arm as it moves in to make contact with the asteroid Bennu.

On August 17, NASA’s OSIRIS-REx spacecraft returned photographs to Earth of a point of light moving through space at about 63,000 mph. These photographs are the result of years of scientific research and engineering work. They also mark the beginning of an exciting new phase for the mission.

The point of light in the images is Bennu, an asteroid discovered in the fall of 1999 by the Lincoln Near-Earth Asteroid Research project, a joint effort of NASA, the United States Air Force, and the MIT’s Lincoln Laboratory. Bennu has a diameter of about 1,587 ft and is considered a potentially hazardous object, with 1-in-2,800 odds of impacting Earth between 2175–2199.

“There was a lot of good news in this image for us,” said Dante Lauretta, OSIRIS-REx principal investigator at the University of Arizona, Tucson. “First of all, the asteroid was right where we thought it was. The spacecraft was also where it was supposed to be and pointing in the right direction, so our spacecraft navigation team has done a fantastic job.”

OSIRIS-REx, an acronym for Origins, Spectral Interpretation, Resource Identification, Security, Regolith Explorer, was launched from Cape Canaveral atop an Atlas V rocket on September 8, 2016. The spacecraft, which is about 8 ft high, 8 ft wide, and 20 ft long with the solar arrays deployed, will continue the approach to Bennu this fall, arriving on December 3. When it reaches the asteroid, the team will fire the spacecraft’s thrusters to slow it from more than 1,100 mph to 11 mph. Eventually, OSIRIS-REx will perform a series of flybys over the poles and equator of the asteroid.

“Bennu’s low gravity provides a unique challenge for the mission,” said Rich Burns, OSIRIS-REx project manager at NASA’s Goddard Space Flight Center in Greenbelt, Maryland. “At roughly 0.3 miles [500 meters] in diameter, Bennu will be the smallest object that any spacecraft has ever orbited.”

Bennu was chosen, in part, for its accessibility, said Lauretta, speaking in a recent teleconference. It is a near Earth asteroid in an Earth-like orbit. “We can launch a spacecraft from the Earth, rendezvous, collect a sample, and bring it back. And that’s the kind of object that would be of interest for any resource development.”

Scientists believe the asteroid dates to the formation of our solar system and could hold clues to the prebiotic molecules that might have led to the origins of life. It might also offer clues about how volatiles are delivered throughout the solar system and the possible distribution of life.

Before OSIRIS-Rex reaches Bennu, cameras will first examine the asteroid for signs of a dust plume. Beginning on October 23, the team will start searching for any indications that Bennu is being orbited by natural satellites that could pose a threat to the spacecraft and its mission. The team will be looking for items as small as 10 cm.

“There is no indication that there is dust in the environment of the asteroid from our extensive ground based astronomical campaign, but we do want to make sure it is safe for the spacecraft to enter the asteroid’s vicinity,” Lauretta said.

“Again, we have no evidence that [natural satellites] exist, from our ground-based astronomical campaign. But we are looking for objects as small as 10 cm and we would not have been able to detect those from the Earth or from our space-based telescopes,” Lauretta added.

After the series of flybys and the team has selected the final sampling site, scheduled for early July 2020, the spacecraft will briefly make contact with Bennu via a sampling arm, which will touch the surface and release a burst of nitrogen gas. This will loosen and raise rocks and surface material, which will be captured in a sampler head. The spacecraft can make three collection attempts and can capture 2,000 grams of material.

OSIRIS-REx is equipped with a Sample Return Capsule (SRC), complete with a heat shield and parachutes, which will return the asteroid sample to Earth, landing in the Utah desert in September 2023.

The mission and the samples analysis “will address how earth acquired its water and organic matter and help us better understand the potential hazards of asteroid impact. Laboratory analysis of the Bennu samples, when it gets back to Earth, will give us clues as to how these objects form and what resources they may hold,” said Lori Glaze, acting director of the Planetary Science Division at NASA Headquarters, speaking at the teleconference.

The OSIRIS-REx team includes the Goddard Space Flight Center, which provides mission management, systems engineering, the University of Arizona, Tucson, which leads the science team and the mission’s science observation planning and data processing, and Lockheed Martin Space in Denver which built the spacecraft and is providing flight operations.