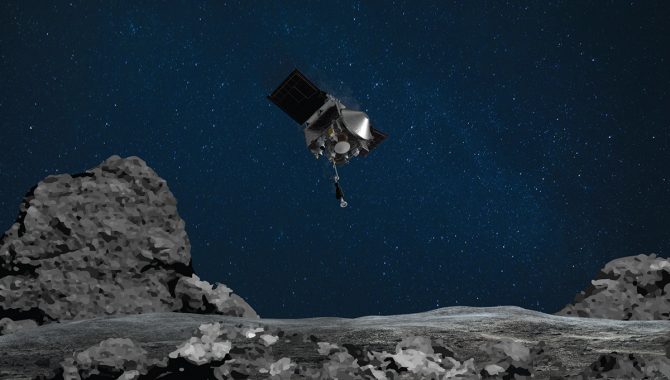 In this illustration, NASA's OSIRIS-REx prepares for sample collection on asteroid Bennu.
Credit: NASA/Goddard/University of Arizona

Sample could provide important clues about the early solar system, seeds of life.

In space exploration, decades of research and development often come down to a matter of seconds. On October 20, 2020, the OSIRIS-REx spacecraft descended toward the surface of the small asteroid it was orbiting 200 million miles from Earth and touched the rough surface with a sampling arm for six seconds.

Those six seconds were all that the team expected, and enough for the Touch-And-Go Sample Acquisition Mechanism (TAGSAM) sampling head mounted at the end of the arm to crush regolith on the surface and disperse a burst of compressed nitrogen, which further loosened regolith and drove it up into collection chambers within the TAGSAM.

At such a great distance from Earth, the spacecraft performed the maneuver autonomously, based on programming that was sent by the OSIRIS-REx team following painstaking site identification and practice sessions at the asteroid, Bennu. Because it takes the data streaming from the spacecraft more than 18 minutes to reach Earth, and there were large amounts of data to transmit, it wasn’t immediately apparent if the early evening collection attempt had been successful.

“I can tell you a lot of us were up really late last night,” said Dante Lauretta, OSIRIS-REx principal investigator, speaking at a NASA press conference the following afternoon. “We were watching the images come down one by one…”  At about 2 a.m. on October 21, the team received the image sequence that showed the contact and collection. The images were very encouraging.

“When the gas bottle gets fired, you can see that particles are flying all over the place. We really did kind of make a mess on the surface of this asteroid, but it’s a good mess,” Lauretta said. “It’s the kind of mess we were hoping for. [A lot] of material has been mobilized, giving us additional confidence that we actually pushed material up into the sampler head.”

Additionally, the team was optimistic because the sampler head, known as the TAGSAM, is fitted with pads of stainless-steel hook and loop fasteners. Based on the regolith characteristics the team observed in images from the spacecraft, those pads are likely to have collected additional material. Days later, it became clear that the collection attempt had been so successful that the sampling head was overflowing.

Captured by the spacecraft’s SamCam camera on Oct. 22, 2020, this series of three images shows that the sampler head on NASA’s OSIRIS-REx spacecraft is full of rocks and dust collected from the surface of the asteroid Bennu.
Credit: NASA

“Bennu continues to surprise us with great science and also throwing a few curveballs,” said Dr. Thomas Zurbuchen, NASA’s associate administrator for science in a NASA press release. “And although we may have to move more quickly to stow the sample, it’s not a bad problem to have. We are so excited to see what appears to be an abundant sample that will inspire science for decades beyond this historic moment.”

The team quickly shifted from concerns about measuring the size of the sample collected, to stowing it quickly and safely in the Sample Return Capsule (SRC). OSIRIS-REx will continue to orbit Bennu until it is in proper alignment with Earth. Then the spacecraft will break orbit and be placed on a trajectory back to Earth. OSIRIS-REx will release the SRC, which will enter Earth’s atmosphere. The SRC, complete with a heat shield and parachutes, is scheduled to land in the Utah desert in September 2023.

OSIRIS-REx is about 8 ft high, 8 ft wide, and 20 ft long with the solar arrays deployed. It arrived at Bennu in late 2018. The team quickly found that the surface was far rockier and rougher than had been expected based on distant observations. The terrain made it much more difficult to identify potential collection sites and required the team to eventually choose between target sites that were as much as 5.12 times smaller than their original goal.

The team spent months working to improve the precision of navigation and sampling maneuvers, which paid off handsomely during the sample collection. The team landed the spacecraft’s sampling head within five feet of the target.

Bennu, was discovered in 1999 by the Lincoln Near-Earth Asteroid Research project, a joint effort of NASA, the United States Air Force, and the MIT’s Lincoln Laboratory. It is considered a potentially hazardous object, with about 1-in-2,800 odds of impacting Earth between 2175–2199.

Scientists believe Bennu is an artifact from the formation of the solar system that could hold clues to important questions about the role of prebiotic molecules in the origins of life and how volatiles are delivered throughout the solar system.

“Discoveries we will make about our solar system and our planets from materials that [were] around at the time of its formation will be immense,” Zurbuchen said at the October 21 press conference. “And the questions that we have whether or not these bodies could in fact seed life on Earth is another tantalizing avenue we want to pursue, and many more. It looks like many generations will have the chance to pursue these kinds of questions and others from the pristine samples coming back to Earth.”