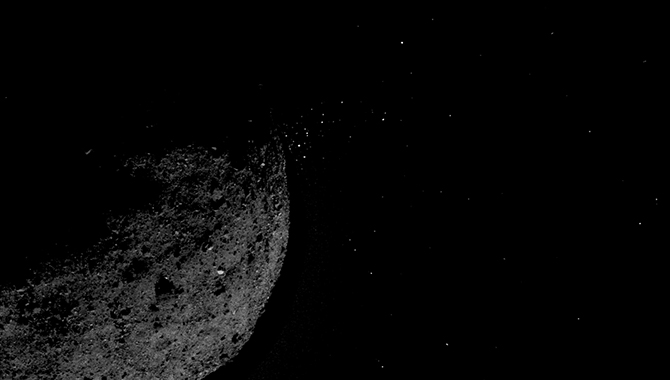 Asteroid Bennu ejecting particles from its surface on January 19, as captured by NASA’s OSIRIS-REx spacecraft.
Credit: NASA/Goddard/University of Arizona/Lockheed Martin

As the 50th anniversary of the first Apollo Moon landing approaches this summer, NASA’s current missions build on that legacy of discovery, covering a vast swath of the solar system—from the distant Kuiper Belt, to the surface of Mars, to the corona of the Sun.

Earlier this month, NASA announced some surprising discoveries from the OSIRIS-REx mission, which is orbiting about 1 mile above the surface of a near-Earth asteroid so small it wasn’t discovered until 1999. Scientists are interested in this asteroid, Bennu, because it has been hurtling through space at about 63,000 mph, untouched, for untold millennia and could contain important information about the formation of the solar system, as well as the role asteroids played in delivering water and organic molecules to Earth.

Bennu is about 1,600 ft in diameter, making it the smallest object ever orbited by a spacecraft. This incredible achievement by NASA has already yielded some amazing scientific discoveries about the surface of Bennu, which data indicates is between 100 million and 1 billion years old. For instance, the OSIRIS-REx team has already observed the asteroid ejecting plumes of particles nearly a dozen times.

This makes Bennu a rare “active asteroid.” Only about a dozen of these have been identified, and none have been observed as closely as OSIRIS-REx is now observing Bennu. The particles and stones range from about an inch to nearly a foot and are ejected in distinct events.

“The discovery of plumes … is one of the biggest surprises of my scientific career,” said Dante Lauretta, OSIRIS-REx principal investigator at the University of Arizona, Tucson, speaking at a recent NASA briefing on the mission.

This rotating mosaic of asteroid Bennu is composed of 40 images captured by the PolyCam imager onboard NASA’s OSIRIS-REx spacecraft over a four-hour period on December 2, 2018. During the observation period, the spacecraft’s range to the center of the asteroid decreased from about 15.3 to 14.6 miles (24.6 to 23.5 km).
Credit: NASA/Goddard/University of Arizona

Although many of these particles being ejected from Bennu move off into space, some orbit and then return to the surface. The OSIRIS-REx team is still investigating why these ejections are happening. But an early analysis of the events indicates they do not pose a hazard to the spacecraft, which is about 8 ft high, 8 ft wide, and 20 ft long with the solar arrays deployed.

The rocky surface of Bennu poses another surprise to the team, who were expecting a smoother exterior. These expectations were based on computer modeling, utilizing the thermal properties and radar measurements of the asteroid. The team is updating those models to better align them with the actual conditions observed.

“…The rugged terrain went against all of our predictions. Bennu is already surprising us, and our exciting journey there is just getting started,” Lauretta said.

The rocky surface, complete with tall boulders as much as 150 ft wide, complicates OSIRIS-REx’s mission to extend a collection arm and gather dust and regolith from the asteroid in July 2020, then return that sample to Earth. The texture, particle size and roughness of the surface are beyond the spacecraft’s design specifications.

To gather the sample, the spacecraft was designed to briefly make contact with Bennu via a sampling arm that will touch the surface and release a burst of nitrogen gas. This will loosen and raise rocks and surface material, that will be captured in a sampler head. The spacecraft can make three collection attempts and can capture 2,000 grams of material. OSIRIS-REx is equipped with a Sample Return Capsule (SRC), complete with a heat shield and parachutes, which will return the asteroid sample to Earth, landing in the Utah desert in September 2023.

On approach, the team was confident of finding a collection target zone 50 meters in diameter and free from boulders and other hazards. Now, it appears the collection zone will be much smaller—perhaps as little as 5 meters.

Because the spacecraft has performed exceptionally well to this point, the team remains confident the collection can be completed successfully.

“Throughout OSIRIS-REx’s operations near Bennu, our spacecraft and operations team have demonstrated that we can achieve system performance that beats design requirements,” said Rich Burns, the project manager of OSIRIS-REx at NASA’s Goddard Space Flight Center in Greenbelt, Maryland. “Bennu has issued us a challenge to deal with its rugged terrain, and we are confident that OSIRIS-REx is up to the task.”

The team has also already observed that Bennu is rotating more quickly because of uneven heating and cooling when the asteroid is in sunlight and found evidence of water-bearing minerals on the asteroid.

“The first three months of OSIRIS-REx’s up-close investigation of Bennu have reminded us what discovery is all about — surprises, quick thinking, and flexibility,” said Lori Glaze, acting director of the Planetary Science Division at NASA Headquarters in Washington. “We study asteroids like Bennu to learn about the origin of the solar system. OSIRIS-REx’s sample will help us answer some of the biggest questions about where we come from.”