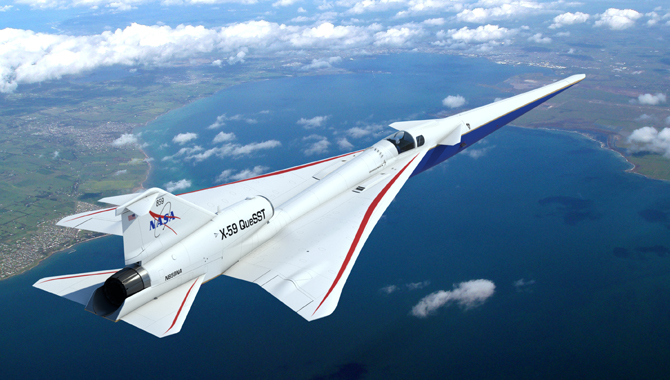 NASA’s first mission to collect a regolith sample from an asteroid and return that sample to Earth took a step forward recently when the team selected a target collection site from a list of four potential candidates on the asteroid Bennu. The Origins, Spectral Interpretation, Resource Identification, Security, Regolith Explorer (OSIRIS-REx) team selected a site dubbed Nightingale, which is in a crater about 460 ft wide. 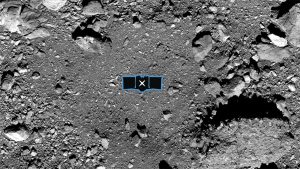 This image shows sample site Nightingale, OSIRIS-REx’s primary sample collection site on asteroid Bennu. The image is overlaid with a graphic of the OSIRIS-REx spacecraft to illustrate the scale of the site.
Credit: NASA/Goddard/University of Arizona

Bennu is the smallest object a NASA spacecraft has ever orbited, at just 0.3 miles in diameter. Its irregular, rocky surface came as a surprise to the team. Based on distant observations, the team expected a smoother surface and fewer obstructions for what was already going to be an intricate regolith collection maneuver. The Nightingale site is about one tenth the size of the 164 ft diameter site the team began searching for earlier this year.

“Bennu has challenged OSIRIS-REx with extraordinarily rugged terrain,” said Rich Burns, OSIRIS-REx project manager at NASA’s Goddard Space Flight Center, in a NASA press release. “The team has adapted by employing a more accurate, though more complex, optical navigation technique to be able to get into these small areas. We’ll also arm OSIRIS-REx with the capability to recognize if it is on course to touch a hazard within or adjacent to the site and wave-off before that happens.”

The spacecraft is equipped with a sampling arm that will touch the surface and release a burst of nitrogen gas. This will loosen and raise rocks and surface material, which will be captured in a sampler head. The spacecraft can make three collection attempts and can capture 2,000 grams of material. The spacecraft’s Sample Return Capsule (SRC) will return the sample to Earth, landing in the Utah desert.

The team will spend the early months of 2020 performing a series of scouting flyovers of Nightingale and a backup site known as Osprey, building to a series of practices runs and finally the first collection attempt, now scheduled for August 2020.

The X-59 QueSST is an experimental aircraft that employs new technologies and a unique shape to prevent supersonic waves from coalescing. This greatly minimizes the volume of sonic booms reaching the ground to the point they should be barely noticeable thumps. Eliminating startling sonic booms could open the door to supersonic flight over land.

The aircraft is 96 feet, 8 inches long, with a wingspan of 29 feet, 6 inches. It is being built by Lockheed Martin’s storied Skunk Works, which was responsible for such significant aircraft as the U-2, the Lockheed SR-71 Blackbird and the Lockheed F-117 Nighthawk.

The X-59 continues a 75-year heritage of X planes, dating to the X-1, which was built at the end of World War II and would go on to become the first manned aircraft to break the sound barrier. The X-59 QueSST is currently scheduled for test flights over select U.S. communities beginning in 2023.

“I’m confident that the contributions the X-59 QueSST will make to our nation and the world will ensure its place among the greatest NASA X-planes ever flown,” said Jaiwon Shin, NASA’s associate administrator for aeronautics, in a NASA press release. 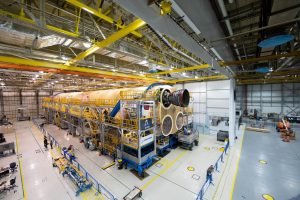 Earlier this year, engineers and technicians at NASA’s Michoud Assembly Facility in New Orleans structurally mated the first of four RS-25 engines to the core stage for NASA’s Space Launch System rocket that will help power the first Artemis mission to the Moon.
Credit: NASA/Jude Guidry

NASA has completed on schedule the first core stage of the Space Launch System (SLS) at the Michoud Assembly Facility in New Orleans and is preparing to send it to Stennis Space Center on a barge traveling through some of the same canals used during the Apollo program, more than 50 years ago.

At Stennis, the core stage will be loaded into the recently renovated B-2 test stand for a Green Run, which will culminate in simultaneous firing of all four RS-25 engines for 8 minutes, just as the core stage will run during a mission. This will test flight computers, navigation and control systems, the propellent tanks and 18 miles of cables.

The SLS core stage is 212 feet tall and 27.6 feet in diameter. Two large tanks store 730,000 gallons of super-cooled liquid hydrogen and liquid oxygen. This fuel will power four RS-25 engines, updated versions of what was used to power the Space Shuttle.

The Green Run test will be performed with the actual flight hardware for Artemis I. Following the testing, NASA plans to examine the core stage, refurbish it as needed, and ship it directly to NASA’s Kennedy Space Center in Florida, where it will be joined with the Orion capsule for launch. The uncrewed Artemis I will travel about 40,000 miles beyond the Moon.