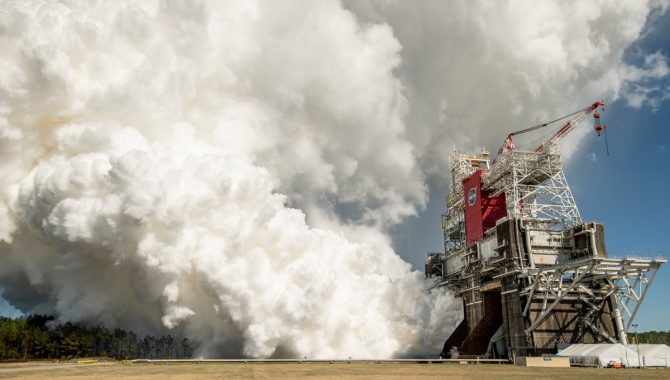 The team of test operators, engineers, and support personnel began arriving at Stennis Space Center before dawn on March 18. The core stage of NASA’s Space Launch System (SLS), standing 212 feet tall and 27.6 feet in diameter, towered above the wooded lowlands secured on the B-1/B-2 Test Stand. Strong storms that blew through Hancock County, Mississippi the night before had passed. Skies were clear and a team from Stennis had been on the stand since 2 a.m. finishing preparations for the final test of this crucial component in the most powerful rocket ever built.

The team assembling that morning was familiar with adversity. NASA’s Michoud Assembly Facility in New Orleans shipped the core stage to Stennis by barge in January of 2020, just as headlines began to mention an ominous new coronavirus. The team methodically worked their way through a series of tests known collectively as a Green Run during 2020, adapting to pandemic protocols. They had spent the past weeks troubleshooting why an earlier attempt at this final, comprehensive “hot fire test” stopped after about one minute on January 16 and working through issues with a prevalve that delayed this second attempt by weeks.

During the morning, support personal filled the massive rocket’s tanks with 537,000 gallons of liquid hydrogen and 196,000 gallons of liquid oxygen, which had been delivered on 114 tanker trucks and transferred to the site via barges. At about 4:40 p.m., a smooth countdown behind them, the team ignited the core stage’s four Aerojet Rocketdyne RS 25 engines. For a heart-pounding 8 minutes and 19 seconds, the roar of a rocket destined to launch a mission to the Moon once again echoed through the coastal lowlands of southern Mississippi, as it had in the era of Apollo.

The historic B-1/B-2 Test Stand had been extensively modified for this moment, with an additional 1 million pounds of steel added to strengthen and extend the stage framework 100 ft higher to accommodate the SLS core, and the 1.6 million pounds of thrust it produces. As much as 335,000 gallons of water per minute—enough to fill an Olympic-sized swimming pool every two minutes—flowed into the heat trench to dissipate the extreme temperatures and to minimize noise. When the test was over, the control room filled with applause.

“Right up front I want to say how proud I am of this team,” said acting NASA Administrator Steve Jurczyk, speaking in a press conference following the test. “Many of the team members have been on the program for a lot of years and worked really hard to get to this point, including the past year during all the challenges we’ve had with the global pandemic.”

“This is a major milestone in advancing our goals and objectives for Artemis—to land the first woman and the next man on the surface of the Moon and to return to the Moon this time stay…,” Jurczyk said. In establishing and maintaining this long-term human presence at the Moon, NASA will also develop and refine many of the capabilities and technologies required for a human mission to Mars.

The same core stage on the B-1/B-2 Test Stand now will be the backbone component of Artemis I, an uncrewed mission sending an Orion spacecraft 40,000 miles beyond the Moon, establishing a retrograde orbit, and then returning to Earth, splashing down in the Pacific Ocean. Before that can happen, however, the team must review data for fine details of how it performed during the test and examine the stage for refurbishment.

“We’ll be getting on the test stand and assessing the core stage over the next few days and taking a look at what kind of work we need to do on the stage to get it ready to ship,” said John Honeycutt, manager for the SLS Program at NASA’s Marshall Space Flight Center in Huntsville, Alabama. “And then, at that point in time, we’ll remove it from the stand, get it on the barge, and ship it to KSC.”

The core stage will travel down the Pearl River to the Gulf of Mexico, around the tip of Florida, and then to Cocoa Beach. The team will bring it to KSC and place it onto a Mobile Launcher Platform waiting in High Bay 3, where two large boosters, one for each side, are already stacked and the Orion spacecraft is being processed for the Artemis I launch, possibly later this year.

“A lot of us are going to look back at this day later in our careers and our lives, talk to our families and friends and significant others, and say we were here for a very important test for the most powerful rocket ever built. And I think that’s just an incredible accomplishment,” said Tom Whitmeyer, NASA’s deputy associate administrator of exploration system development.