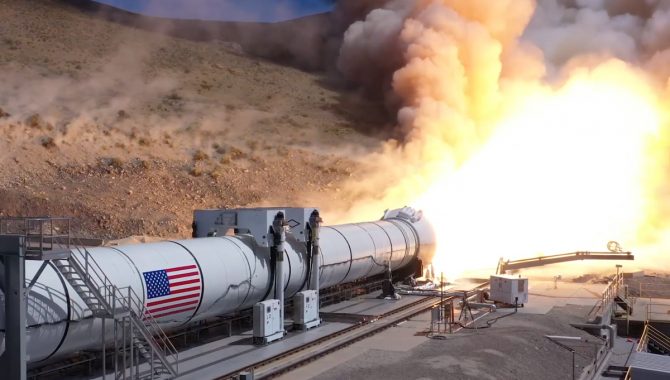 Boosters will provide power for flights to the Moon and Mars.

For about 126 seconds on September 2, 2020, a desert valley outside Promontory, Utah echoed with a spectacular roar, as one of the massive new solid rocket boosters that will power Artemis missions to the Moon and beyond was tested.

The boosters will operate in a pair, standing 177 feet tall, 12 feet in diameter, and weighing 1.6 million pounds each on the launch pad. The test booster was mounted horizontally to a stand. When the propellent was ignited at 1:05 p.m. local time, it sent a plume of fire and smoke hundreds of yards back into the landscape, the 3.6 million pounds of thrust carving an even deeper groove into the hillside as dust and dirt rose hundreds of feet into the sky.

“That was very exciting. It is really impressive to see a rocket that large fire off in the desert,” said Bruce Tiller, SLS Boosters Office Manager at NASA’s Marshall Space Flight Center. Tiller commended Northrop Grumman for rising to the challenge of staging the test successfully during a global pandemic.

The test, which duplicated the actual burn time of a booster in flight, gathered data on a propellent component—powdered aluminum—from a different manufacturer, according to Charles J. Precourt, Vice President of propulsion systems at Northrop Grumman, in Promontory and a former NASA astronaut. “That material was processed in a very special way and our original supplier—that we’ve had for years—had to move its installation. We had to go to another vendor and make sure that that process delivered the exact specification of the aluminum powder, which is a key ingredient in the propellant, that’s a big deal.” 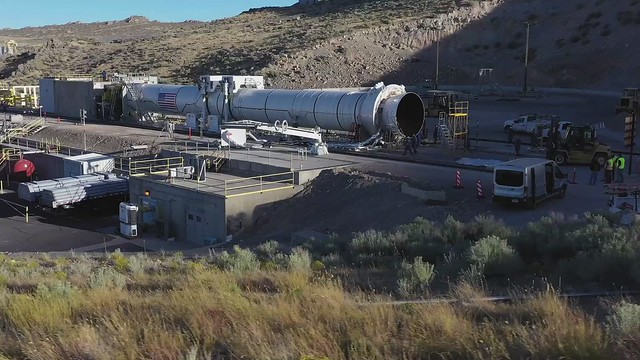 Precourt is quite familiar with solid rocket boosters, having served as Commander of Space Shuttle flights STS-91 and STS-84, and the Pilot of STS-71. All three missions docked with the Russian space station Mir. He was also a mission specialist on STS-55, which carried a German Spacelab with 88 experiments from eleven different nations.

“Every time I watch one of our tests out here, you get down to the last 30 seconds, it reminds me of being on the launch pad waiting for the liftoff and the kick in the pants of these boosters,” Precourt said in a press conference following the test. “And sure enough, as it lights off it takes five seconds for the sound to travel and hit you in the chest.”

The test also included a host of other changes that will affect Artemis IV and later missions, including modifications to the nozzle forward exit cone housing. “That had a small change…, but it’s nice to get a full-scale test,” Tiller said. “Full-scale booster tests are rare, so NASA tries to test multiple objectives at one time so we are highly confident that any changes we make to the boosters will still enable them to perform as expected on launch day.”

The solid rocket boosters for the SLS will be larger and more powerful than those used during the Space Shuttle era, incorporating decades of advancements in avionics systems. The SLS boosters also benefit from a bottom-up review of manufacturing processes to identity opportunities for higher efficiency.

“The biggest difference is in the number of motor segments,” Tiller said. “This has five segments, the Shuttle boosters had four segments. So, a lot more power, a lot more energy, which is what this vehicle requires for trips, such as to the Moon.”

Immediately following the test, engineers were examining data from 300 separate channels, but early indications were that the test was successful.

Tiller said the test felt like another milestone in development of the SLS, “not only for the data that we intended to get out of this test.” He noted that as the test was being conducted, the booster segments for the first Artemis mission have already arrived at Kennedy Space Center, where they will be assembled. “These boosters are so large you can’t build them in one piece. You have to build them in pieces or else you can’t transport them anywhere; they’d be too big.”