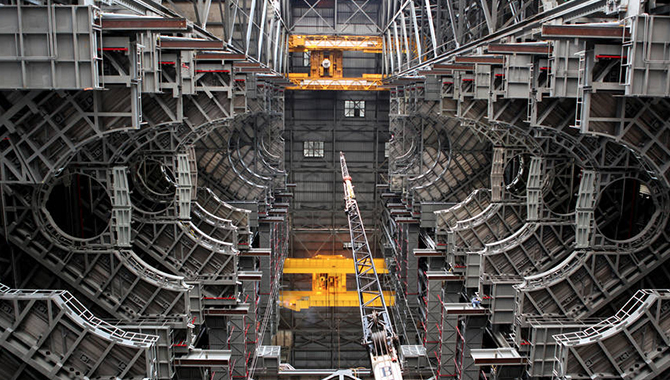 High up in the Vehicle Assembly Building at NASA's Kennedy Space Center in Florida, an overhead crane lowers the final work platform, A north, into place for installation in High Bay 3 In January 2017. Installation of the final topmost level completed the 10 levels of work platforms that will surround NASA's SLS rocket and the Orion spacecraft and allow access during GSDO processing for missions.

Chris Singer, NASA’s Deputy Chief Engineer for Engineering Integration prior to his retirement in 2017, says that just like a good marriage, you have to share and communicate effectively to make a human spaceflight system work.

“The document doesn’t make the relationship that’s required to be a good system for these high performance systems. You’ve got to live in each other’s space. You’ve got to appreciate what’s important to each other,” said Singer. “That means you actually have to talk about what’s important, and what you’re worried about, and why you’re worried about it, and start building that longer-term relationship.”

Bringing It All Together

In October 2015 SLS became the first human-rated rocket in almost 40 years to complete a Critical Design Review (CDR), clearing the way for full-scale fabrication. Orion, the world’s only human-rated deep space vehicle, and the Ground Systems Development and Operations Program that will provide the facilities and ground support at NASA’s Kennedy Space Center to prepare SLS and Orion for the journey to Mars, completed a joint CDR in March 2016. NASA’s ESD Division manages the technical integration of the Deep Space programs designed to push human exploration farther than ever before.

He considers integration the most important part. “Dealing with highly complex, high-reliability systems requires a lot of effective communications,” said Singer, who moderated the Integration Lessons panel at the Human Spaceflight Knowledge Sharing Forum. The panel, composed of the following individuals, shared integration challenges and lessons learned during NASA’s ongoing Journey to Mars.

ESD’s approach pushes the integration function to lower levels closer to the hardware owners and relies on the Orion, SLS and GSDO programs to self-integrate. Management models used by the programs could leave open the possibility of gaps in coverage, so a strong Cross-Program Integration Team (CPIT) with Integrated Task Teams (ITT) was established. The teams use resources largely owned by the programs, but report and respond to the ESD CPIT.

The Orion Program uses a streamlined oversight model to maximize the amount of inline work, maintaining a minimum level of oversight. “Our philosophy is the best oversight comes from being part of the day-to-day work, working through the challenges with our engineers,” said Jim Geffre, Orion Vehicle System Performance and Analysis Office Lead. “Meanwhile, we maintain a strong system manager/subsystem manager function to preserve that traditional oversight role.”

Orion and SLS are geographically distributed across NASA centers, contractors and international partners. Geffre said one of the most interesting integration challenges on Orion is the European-built service module, an essential part of the spacecraft that will power, propel and cool Orion in deep space as well as provide air and water for crew members. The European Space Agency (ESA) has engaged 13 European countries in development of the service module.

“This kind of geographic separation introduces some new integration challenges,” said Geffre. “You’re dealing with a six-to-eight-hour time difference every day, which limits how much communication can be done via telecon or phone call. We’ve had to adapt our integration model to working with ESA.”

The Orion Program created a dedicated European integration office to negotiate agreements and manage the integration function. Geffre said they rely more heavily on integration through documentation due to limited opportunities for day-to-day integration and interaction. He said one of the biggest challenges in working with the European partners is getting the documentation right so that the end product meets overall mission needs.

The process of integrating proven engines into a new vehicle is front and center for SLS. “Legacy hardware. Legacy engines. 135 successful flights. Very robust, proven design. But it’s a new vehicle. New operating conditions. New environments. Different avionics protocols. So, we have to do some work to adapt those engines to that vehicle,” said Johnny Heflin, SLS Liquid Engine Office Deputy Manager. “We’re in the process of testing those engines at Stennis now to prove that the engine meets SLS environments and capability along with certifying the new engine controller that we’ve developed in order to interface with the new vehicle avionics.”

SLS will be the most powerful rocket NASA has ever built. When completed, the rocket will enable astronauts to begin their journey to explore destinations far into the solar system. Heflin provided an SLS overview and a description of the systems engineering and integration (SE&I) function from an organizational point of view. “That’s what integration is all about – people. And it’s about those touch points,” he said. “It’s about having people in the right positions with clear lines of responsibility, roles and responsibilities defined, and clear lines of communication.”

Heflin added that clearly defined roles, responsibilities and communication paths are essential not only for integration, but for programs to remain lean in an era of affordability.

GSDO is responsible for upgrading KSC infrastructure and developing ground systems to build, process, launch and recover SLS and Orion on time and on budget. GSDO relies on the CPIT model, which depends on multiple ITTs and proactive involvement of program SE&I leads who identify and address high risk integration items. GSDO also uses Integration Engineers as technical representatives to SLS and Orion, providing program-to-program technical integration during development, integrated testing and operations.

Jessica Parsons, GSDO SLS Integration Lead, said using the CPIT model instead of an independent Level 2 Integration Office allows GSDO, SLS and Orion to work together more closely than during the Constellation Program, where issues were elevated to Level 2 for them to work the problem. “We don’t wait for somebody else to solve that problem,” said Parsons. “We will call our sister program and try to figure out how can we resolve that problem. What is the best solution that we can come up with for the enterprise?”

Parsons said each of the programs participates in major life cycle reviews, and she thinks this has been essential to help identify technical issues and disconnects early in the process.

“I think this integration model allows for quick decision velocity,” said Parsons. Joint Integration Control Boards convene three times per week and the three program Chief Engineers make technical decisions. If they can’t come to resolution on an issue, it is elevated to the Program Managers the following week to expedite decision making.

The biggest challenge from Parsons’ perspective is that each program has an agile software development process. She said it’s really hard to integrate the software, but they have been successful in identifying what each program needs and when the information is needed.

“One of the great things about what we do with the CPIT model is it can grow, or it can retract as we move through our development cycle,” said Read. “The ad hoc teams are short lived. They may not be product-specific, but sometimes actually an ad hoc team can turn into an integrated task team.”

She said schedule is a challenge as the three programs work independently, but also collaboratively. Read noted that the importance of communication in integration is a recurring theme, and that the CPIT leads talk with each other every morning and have weekly tag-ups and a technical forum where they status technical topics and action resolution.

Orion’s Geffre added that daily communications between the organizations was established as a regular business rhythm. “Sometimes you need to force that communication at the start, and then it just kind of grows organically,” said Geffre. “Probably the biggest lesson learned is the benefit of early communication.”