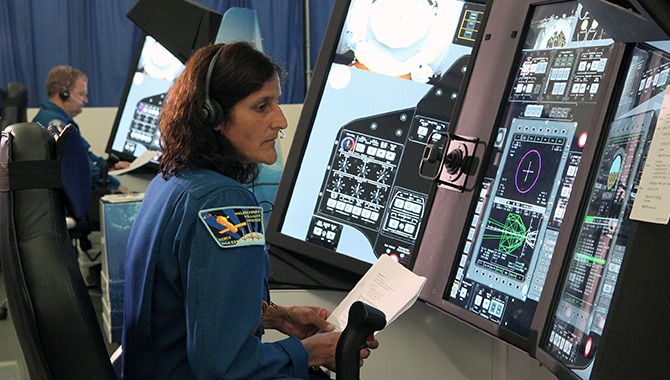 “Trust, but verify” is the approach NASA and its commercial partners are adapting as part of the new shared accountability model for safe, affordable launch to low-Earth orbit.

The goal of NASA’s Commercial Crew Program (CCP) is to achieve safe, reliable and cost-effective access to and from the International Space Station (ISS) and low-Earth orbit through the development of a U.S. commercial crew space transportation capability. NASA and industry are investing time, money and resources to develop systems for the U.S to launch astronauts to space from America. To accelerate the program’s efforts and reduce the gap in American human spaceflight capabilities, NASA awarded more than $8.2 billion in Space Act Agreements and commercial crew contracts.

NASA will fly missions to meet its space station crew rotation and emergency return obligations once a transportation capability is certified to meet agency requirements. CCP certification activities are based on a shared accountability balance that acknowledges:

Launch Pad 39A at NASA’s Kennedy Space Center in Florida undergoes modifications by SpaceX to adapt it to the needs of the company’s Falcon 9 and Falcon Heavy rockets.
Photo credit: NASA

During the “Shared Accountability: Lessons from Commercial Partnerships” panel discussion at the Human Spaceflight Knowledge Sharing Forum, representatives of NASA and commercial partners Boeing and SpaceX provided an overview of the new model. “A lot of my history is on the Space Shuttle Program, so the shared accountability model is new for me, just like it is for a lot of us who are used to traditional ways that we have gone about trying to launch humans into space,” said Panel Moderator Katherine Van Hooser, Chief Engineer for NASA’s Marshall Space Flight Center.

One of the biggest departures from the traditional approach is that NASA previously would have chaired review and engineering control boards, and contractors would have attended. Under the CCP shared accountability model, NASA attends and industry partners act as the decision authority. NASA personnel are on the partners’ boards, get full insight into what’s going on, and advise industry partners.

NASA has a critical role in assuring crew safety and mission success for agency missions. NASA defines the requirements, approves any variances to those requirements, and ensures compliance through the evaluation and approval of industry assertion of readiness to transport crew to and from the ISS. Industry responsibilities include design, development, test and evaluation (DDT&E), production of the space vehicles, and operations.

“The industry is really responsible for DDT&E, and that includes ground launch and all mission phases. Our commercial partners are accountable for asserting their readiness for certification, and we will assess their readiness for certification as we go through the process,” said Ed Burns, Manager of NASA’s CCP Systems Engineering and Integration Office. “It’s a slightly different balance of accountability, but I think it can be successful for reaching a safe, reliable crew transportation system.”

Forum panelists representing Boeing and SpaceX said they view the CCP model as a side-by-side partnership where data is openly shared throughout the process. They described the government-industry partnership as a very positive relationship built out of mutual respect and characterized by openness and a willingness to share data.

A rocket engine static fire test was cited as an example of the way the shared accountability process works. The commercial partner held the Test Readiness Review and performed the test. NASA reviewed data from the static fire test and agreed with the partner’s conclusions that the test data signaled the go-ahead for a launch pad abort test. Panelists said the process worked in a very efficient, rapid fashion, and NASA’s feedback gave industry the confidence needed to do the launch pad abort test just one day after the short-duration, static fire test. Throughout testing, as in all phases of CCP, industry partners share technical issues that arise during preparation as well as risks and how they have been mitigated, and NASA offers feedback and expertise.

From a NASA program office perspective, Burns says one of the major benefits of the shared accountability model is a much leaner, more agile organization with fewer program office personnel and a smaller footprint than human spaceflight programs of the past, such as the Space Shuttle Program. “The balance of responsibility has changed, but the pace and the number of different issues you’re going to deal with, especially having two providers working concurrently, are a lot different. So, the organization has to be lean, agile and highly adaptable,” he said.

From an industry partner perspective, one of the biggest benefits has been the ability to make decisions in a timely fashion. Shared accountability has also led to increased schedule discipline and more efficient execution. Industry partners say they see themselves much more as the gatekeepers and question almost everything, every day, because of their shared accountability for mission success.

Empowering the lowest level possible from a personnel standpoint has been a boost to shared accountability as the industry partners trust, but verify, decisions that are made across the workforce. Employees who actually build the widgets share in the accountability and responsibility. From a management perspective, one of the lessons learned is that replacing or augmenting most of the traditional in-person boards – other than risk management and change control boards – with online decision evaluation and discussion systems has increased decision velocity. From a design perspective, industry partners say they’ve learned to simplify design as much as possible from the beginning, because it will get more complicated as the design evolves and internal and external stakeholders have their input.

One of NASA’s major roles in CCP is establishing requirements and verifying they are met. Burns says one of the big lessons learned is that the guardians of the requirements baseline need to take that responsibility very seriously and keep nonessential requirements from shoehorning their way into the system. He says lessons learned include the importance of permitting very different approaches to meeting requirements and having requirements that don’t decompose into enforcing a design or a design approach. “We’ve given that flexibility in design space to the providers, and they’ve come up with some rather innovative approaches,” said Burns. “They haven’t found themselves bound to traditional ways that we would do things.”