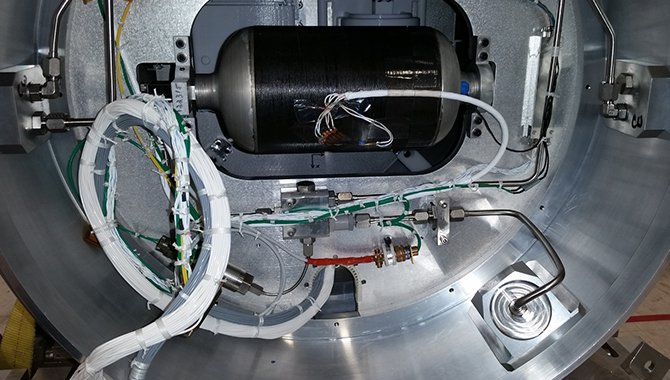 Composite Overwrapped Pressure Vessels, such as hydrogen or oxygen tanks, are inherently high-risk spaceflight components that demand a lot of attention to detail.

The enormous amounts of energy associated with Composite Overwrapped Pressure Vessels (COPV) automatically introduce risk that has to be mitigated. For example, a gas vessel with a volume of 1,300 cubic inches and pressure of 9,700 psi has the energy equivalent of 3.6 pounds of TNT.

As part of the Human Spaceflight Knowledge Sharing Forum panel on “Using Lessons Learned to Mitigate NASA’s Top Technical Risks,” Lorie Grimes-Ledesma, Chair of the NASA Engineering and Safety Center (NESC) Composite Pressure Vessel Working Group, presented COPV lessons learned. The working group she chairs is chartered to understand and minimize risk associated with COPV use throughout NASA. Grimes-Ledesma said failure modes are well-defined for typical use, and standards exist to capture typical approaches to mitigate the risk of failure.

NASA commonly uses COPVs for gas and propellant storage in spacecraft and launch vehicles. The vessels, designed to hold fluid or gas under pressure, consist of a thin, nonstructural liner wrapped with a structural fiber composite. Fiber-reinforced polymers with carbon and Kevlar fibers are the most commonly used composites in the vessels. The liner provides a barrier between the fluid or gas and the composite, preventing leaks and chemical degradation of the composite.

COPVs are stronger and lighter weight than metallic pressure vessels. While cylindrical COPVs are more common, spherical COPVs are also used. Grimes-Ledesma said there’s not necessarily an ideal size, shape or thickness of a COPV based on the temperature or fluid inside the vessel. Sizes and shapes of COPVs are typically driven by packaging constraints within the spacecraft, and considerations of cost and schedule with COPV manufacturers.

A long history of using COPVs for flight has resulted in a lot of lessons learned, which have contributed to development of various standards. “There are specific standards that, if followed, should help you mitigate the risks,” said Grimes-Ledesma. “Like all standards, they’re subject to interpretation, which can be kind of problematic and usually requires a discussion.”

Various rupture failure modes of COPVs are addressed during engineering design. She said work is ongoing to address COPV risks that are still not fully understood, such as stress rupture, impact damage, and liner crack growth. “Understanding risk requires adequate visibility into how the requirements are met. Sometimes, these seemingly small details can be the big ‘gotchas’ with COPVs, so a lot of detailed review and significant oversight is usually necessary,” said Grimes-Ledesma.

Safe, reliable use of COPVs is dependent on preventing rupture failures. A COPV rupture can be catastrophic to the surrounding spacecraft structure and components. Stress rupture is a time-dependent failure mode of the composite material that can occur at operating pressures and temperatures, resulting in rupture failure below the ultimate stress. The NESC and International Space Station (ISS) Program are conducting large test programs on composite strands and COPVs to quantify the risk of stress rupture failure in flight.

NASA and the U.S. Air Force conducted an independent study of impact damage of COPVs at White Sands Test Facility. Based on the study conducted in the late 1990s, recommendations for preventing impact damage to a COPV include developing and following a damage control plan and having damage tolerance testing and/or protective covers. Grimes-Ledesma says information is also needed from various suppliers in order to understand risk that could occur from impact damage.

Impact damage was not as big of a concern during the Apollo era because the metallic pressure vessels were less susceptible to failure due to impact. Questions regarding long-term reliability of COPVs were raised due to issues on the space shuttle orbiter, and became significant for the ISS, robotic missions and future programs. Nine pressure vessel failures or leaks occurred on space shuttle orbiter COPVs, drawing attention to impact damage, cycle life, stress rupture reliability of the Kevlar composite, and changes in fracture mechanics knowledge.

During Apollo development of all-metal pressure vessels, 19 failures occurred. “This lesson learned from a large number of metallic pressure vessel failures during the Apollo era was really critical and very important for COPVs because a lot of the failure modes that were observed in these all-metal pressure vessels also are very important to the liner,” said Grimes-Ledesma. “Three of those failed while they were installed in the spacecraft, two during a system test, and one, of course, was Apollo 13, as everybody is probably familiar.”

Others failed during acceptance or qualification tests due to:

Fracture-based concerns were captured in a series of recommendations at the time. Johnson Space Center Materials Engineer Glenn Ecord authored “Apollo Experience Report – Pressure Vessels,” which included a wish list for future pressure vessels and COPVs. Fracture mechanics was pinpointed as a key concern in pressure vessel design, whether it was a metallic pressure vessel or COPV. Recommendations in the report, released in September 1972, included:

Grimes-Ledesma said COPV lessons are not necessarily always learned from an accident or problem that occurred in service, but sometimes come through laboratory examination of the failure mode to understand whether an imagined concern is actually a large risk. She emphasized the importance of design standards that define very specific ways pressure vessels can fail; process controls; and testing as viable approaches to mitigate COPV risk.