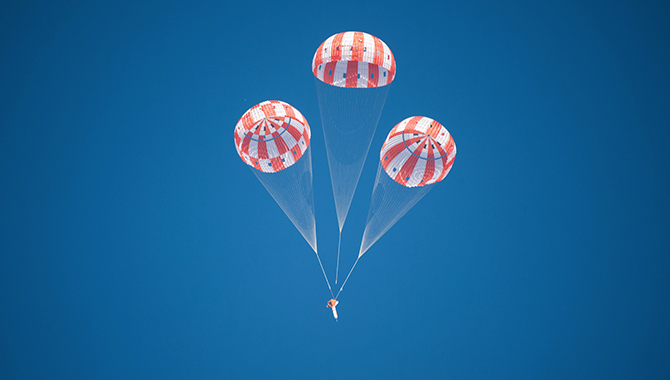 A test to begin qualifying the Orion parachute system for crewed flights was conducted in September 2016, one of eight integrated, qualification drop tests planned over a three-year period.

Parachutes are critical to safely returning the Orion spacecraft and its crew to Earth.

Orion’s Capsule Parachute Assembly System (CPAS) has the job of stabilizing and slowing the capsule from traveling more than 300 mph down to about 17 mph to safely splash down in the ocean. “If the parachutes don’t work in any phase, that can mean loss of the vehicle or loss of crew,” said CPAS Deputy Project Manager Brian Anderson. “There’s no backup system.”

Anderson presented a CPAS overview as part of the Human Spaceflight Knowledge Sharing Forum panel on “Using Lessons Learned to Mitigate NASA’s Top Technical Risks.” He focused on the Orion parachute system, but noted that the lessons are applicable to all human-rated parachute systems.

The Orion spacecraft is built to take astronauts farther into the solar system than ever before, provide emergency abort capabilities, sustain the crew during the mission and provide safe re-entry through Earth’s atmosphere. CPAS is composed of 11 total parachutes that deploy in a precise sequence. Three parachutes help pull off Orion’s forward bay cover, which protects the top of the crew module from the heat of reentry through Earth’s atmosphere. Two drogues then deploy to slow and steady the capsule. Three pilot parachutes then pull out the three orange and white mains that Orion rides on for the final 8,000 feet of its descent. Orion’s main parachutes – each made of more than 10,000 square feet of nylon and Kevlar fabric — are packed to the density of oak wood to fit in the top of the spacecraft, but cover almost an entire football field when fully inflated.

While there’s no backup system for the parachutes, there is some built-in redundancy in that the system can function on one drogue parachute or with two of the three parachutes, if one main parachute is lost, and still meet landing requirements.

Parachute deployment is a dynamic event. The quality of the deployment can be affected by many uncontrollable factors occurring independently or in combination, including atmospheric conditions, angle of attack, altitude, dynamic pressure, packing and routing variations, minor sequence differences, and lead/lag conditions.

“Parachutes themselves are very challenging and chaotic,” said Anderson. “They’re the only system that assembles itself midair.”

For human spaceflight, deployment conditions vary widely due to vastly different nominal entry, pad abort and ascent abort requirements. “Because of the requirements of human spaceflight, we have to deploy under a really wide range of conditions from very low velocities up to very high velocities,” he said. “And because of that wide range of operational parameters, it’s very tricky and it causes a lot of risk into a system if you don’t test that system out well.”

Deployment can only be validated by repeated observation of airdrop tests with mortars and a representative parachute compartment. Anderson said verifying performance in regimes where data is not available or cannot be collected should be avoided.

Parachute modeling is almost exclusively empirical. Some predictions, such as loads, torque, and terminal rate of descent, use physics-based models anchored to test reconstructions. Other aspects, such as packing and integration, deployment and inflation, are not modeled with enough confidence to verify with analysis.

A crane lowers a main parachute for installation on the Orion spacecraft inside the Operations and Checkout Building high bay at NASA’s Kennedy Space Center in Florida.
Photo Credit: NASA

The Apollo Program had 151 parachute drop tests composed of single-parachute as well as cluster-parachute tests. The Orion Program plans to conduct a total of 44 parachute drop tests that will include 25 system tests with parachute clusters in various configurations. Following completion of 36 development tests, including Exploration Flight Test 1 (EFT-1), the first of eight qualification tests was completed in September 2016.

“We don’t need to go to 151 to get to the same reliability because we have learned from Apollo. But at the same time, we have significant enough differences that we do need to understand, for example, how our system interacts with the vehicle, how we pack, and how we deploy. All of those things are very important to learn,” said Anderson.

He said the CPAS team learned that getting the test article onto the desired test point can be very challenging and should not be underestimated. Whether the test occurs out of an airplane or using balloons, he said the test technique can be as challenging as the design of the flight parachute system itself.

Computational techniques are not mature enough to be primarily relied upon for human spaceflight parachute design, although they are getting close, according to Anderson. He said fluid structure interaction capabilities are improving and great work is being done by some of the parachute vendors and others using LS-DYNA multiphysics simulation software. Methods for testing subscale parachutes and test vehicles require additional detailed study and investment, but could ultimately result in cost savings or reduction in logistical complexity.

Anderson said the most important lesson learned may be that there needs to be adequate system-level testing.

“Our chief engineer always says that in order for us to have a successful design, it needs to be given the opportunity to fail with repeated demands during development testing. And in order to see that — not necessarily a full-scale failure where you hit the desert at a very high speed, but even just small parts of the parachute system — having sufficient instrumentation and video coverage is required to truly understand the system and to have confidence in reliability growth,” he said.

Anderson gave an example of a CPAS pendulum swing issue that didn’t surface until the third test with two main parachutes, and would likely have gone unnoticed and unresolved with fewer tests. He said the number of system-level tests needs to be adequate to find “hidden” failure modes.

The adequate number is design-dependent, including parachute platform, packing methods and shapes, vehicle integration, and concept of operations, and also hinges on the relationship of the current design to previous, similar designs. Anderson said CPAS has benefited greatly from Apollo, and commercial partners have benefited from CPAS experience.