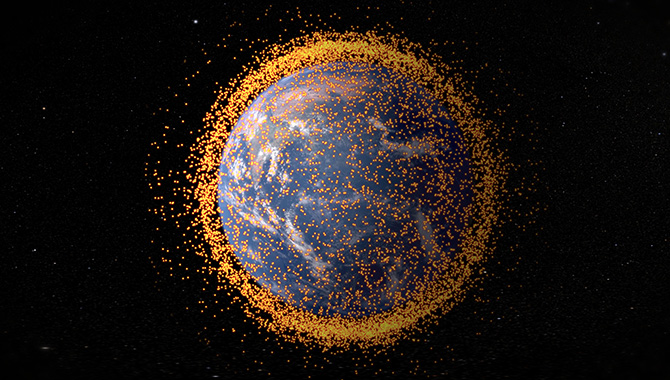 The No. 1 risk for NASA’s human spaceflight programs, including Orion, is micrometeoroids and orbital debris (MMOD). Due to the danger MMOD poses to space missions, NASA invests significantly in investigating the potential risk from micrometeoroids — natural objects typically comprising particles originating from asteroids or comets — and man-made orbital debris such as decommissioned satellites, rocket bodies, thermal blankets and even objects as tiny as paint flakes that could cause catastrophic damage when hurtling through space at speeds up to 44 miles (70 kilometers) per second.

Mike Squire, Principal Engineer in the NASA Engineering and Safety Center (NESC), presented an MMOD overview as part of the Human Spaceflight Knowledge Sharing Forum panel on “Using Lessons Learned to Mitigate NASA’s Top Technical Risks.” Squire said orbital debris is more of a concern for spacecraft in orbit about the Earth than micrometeoroids because there’s more of it.

“We had no idea that the MMOD population was going to grow by orders of magnitude today and continue growing in the future,” said Squire. “So the risk is only getting worse.”

The Department of Defense Space Surveillance Network tracks objects as small as 4 inches (10 centimeters) in diameter in low-Earth orbit and about 1 yard (1 meter) in geosynchronous orbit. The DOD network currently tracks more than 21,000 objects. Squire said objects smaller than 4 inches are the biggest concern since they can’t be tracked but can still cause significant damage.

Orbital debris travels up to 33,500 mph (approximately 54,000 kilometers per hour), fast enough for even a relatively small object to damage a satellite or spacecraft. Micrometeoroids can move at speeds 10 times higher than orbital debris.

Squire shared high-level MMOD lessons learned and emphasized the importance of direct measurement. “By direct measurement, I mean either getting your hands on a piece of space hardware that flew and was brought back, and it has impact damage, and being able to analyze that and incorporate that data, or, alternatively, having sensors in orbit that are able to detect impacts and feed that information back down to the ground,” said Squire during his forum presentation.

He said evidence began mounting during the Gemini era that orbital debris was starting to be a problem, and the understanding of the magnitude of the problem increased during the Apollo and space shuttle years. Squire said the technical community has a relatively good understanding of the orbital debris environment around the International Space Station (ISS) and space shuttle altitudes because of direct measurements performed on radiator panels, windows and hardware that have been brought back down from orbit. Beyond that region, he said extrapolation and various assumptions come into play, but that different orbital debris models are generally in agreement that the peak in orbital debris appears at an altitude of approximately 435 to 500 miles (700 to 800 kilometers), highlighting why it’s important to get assets into the higher region and get more direct measurements.

Squire explained why the latest NASA Orbital Debris Engineering Model — ORDEM 3.0 — shows higher risk than previous models. The new model incorporates recent events such as the Chinese anti-satellite test and the Iridium-Cosmos collision that were not in the previous model. Based partly on an NESC recommendation, ORDEM 3.0 also includes a population of higher density particles, such as stainless steel, which inflict more damage when they hit a spacecraft and therefore elevate the risk numbers above the older model that assumed all debris particles were aluminum, which has a lower material density than steel.

In addition to validating models with real-world data through direct measurement, Squire said testing is very important. Although hypervelocity impact testing is difficult and expensive, he said it is very important to be able to “see what the actual physics are when different objects are impacting different shields and different spacecraft components.”

Squire encouraged the technical community to exchange MMOD information and make a strong effort to understand huge uncertainties in different elements of the risk assessment process, including limitations of the tools, and make sure customers know that those uncertainties are going into the design process. He cautioned that it is crucial to know the difference between risk and assessed risk — stating assessed risk can be improved by getting more information on the environment models and improving the fidelity of the spaceship spacecraft configuration.

“Details matter in assessing MMOD risk,” said Squire. “You can make very minor changes in your risk assessment, and these will end up being relatively major changes in your assessed risk. So that means you need to make sure you nail down your spacecraft configuration. Have it as accurate as possible. For example, know what your tank thicknesses are, how many layers of MLI (multi-layer insulation) you have, and how much area your blanket is covering, because small changes in this will make significant changes in your risk, and it will drive decisions in design.” He pointed to the importance of understanding the transition from design-based to operational-based mitigation, noting that there usually are not as many options for changes in the operational phase. Shielding augmentations have been made on the ISS, but he said adjusting attitude and orbit and similar mitigations are usually all that’s left once a spacecraft is operational.

Ongoing missions are not the only concern. Squire recalled the 1981 explosion of a Delta upper stage – “just a dead derelict in orbit” launched in 1978 — that produced about 200 pieces of trackable debris, offering the “first inkling that this was a source of orbital debris — these dead objects up in orbit.” The Delta incident resulted in mitigation guidelines to passivate objects as necessary or make sure they don’t remain in orbit for decades after they have stopped working. Debris-on-debris impacts are accelerating, and he said that resulted in the so-called “25-year rule” that prohibits satellites from orbiting for more than 25 years in an effort to prevent additional generation of debris.

The focus of the knowledge sharing forum was human spaceflight, but Squire mentioned the robotic community is also seeing an increase in MMOD issues. “They’re being levied with requirements to mitigate generation of more orbital debris,” said Squire. “They have to be able to prove that they can survive their mission and be able to de-orbit after the end of their mission so they don’t generate more orbital debris.”

Squire said CubeSats are also causing concern as companies prepare to launch hundreds or thousands of the miniature satellites that could add to the growing orbital debris problem.