Back to Top
Home/INSIGHT/NASA Publishes Plan for Lunar Exploration 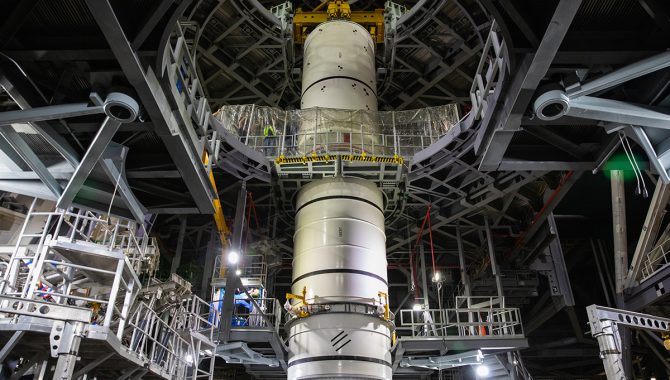 Early Artemis missions will establish a foundation for sustainable activities on the Moon.

As the components of the first mission of the Artemis program arrive at Kennedy Space Center and are assembled together following testing at NASA Centers around the country, the Agency has released a report that details the bold goals of a program that will forever change how humanity views the Moon and later, Mars.

“Under the Artemis program, humanity will explore regions of the Moon never visited before, uniting people around the unknown, the never seen, and the once impossible. We will return to the Moon robotically beginning next year, send astronauts to the surface within four years, and build a long-term presence on the Moon by the end of the decade,” writes NASA Administrator Jim Bridenstine in the forward to the report: Artemis Plan: NASA’s Lunar Exploration Program Overview.

“NASA is building a coalition of partnerships with industry, nations and academia that will help us get to the Moon quickly and sustainably, together.”

The Artemis missions will begin with Artemis I, an ambitious spaceflight that will launch an uncrewed Orion spacecraft atop what will be the world’s most powerful rocket ever launched, the Space Launch System (SLS). The mission will use a “Block 1 configuration” of SLS, 322 feet tall and producing 8.8 million lbs. of thrust. Artemis I will enter Earth orbit before setting a course for the Moon. At its farthest point in space, Artemis I will be 280,000 miles from Earth, a new record for a spacecraft designed for human occupants.

The mission will be a crucial test of all of the Artemis hardware and systems, providing NASA engineers with a wealth of data about the performance of the massive SLS, the Orion capsule, the European Service Module, and the spacecraft’s high-performance ablative heat shield. The heat shield, comprising silica fibers, an epoxy-novalic resin, and a fiberglass-phenolic honeycomb will be exposed to temperatures approaching 5,000 degrees Fahrenheit when Artemis reenters the Earth’s atmosphere travelling about 25,000 miles per hour.

The next Artemis mission, Artemis II, will be the first to carry humans. NASA envisions the mission—reminiscent of Apollo 8, which orbited the Moon in late December 1968—serving as an inspiration to a new generation while further testing and validating the Artemis hardware and systems in preparation for a new Moon landing on Artemis III. The spacecraft will first establish a high-Earth orbit and perform a series of tests and maneuvers for 42 hours of the 10-day mission.

The journey to the Moon and back will take about eight days, charting a figure-eight flight path that reaches its farthest point at 4,600 miles beyond the far side of the Moon. The crew will test new GPS and communication technologies to pinpoint their location above the lunar surface and maintain contact with mission control.

“The Artemis I and Artemis II flight tests will validate rocket and spacecraft performance and set America on a course to once again return astronauts to the Moon. NASA will also work with commercial partners to build landers and conduct risk-reducing tests in the lead-up to the landings on the Artemis III mission and beyond,” the plan’s authors note.

When the Artemis III mission launches, scheduled for 2024, the Orion spacecraft will already have traveled to the Moon twice, logging a staggering 2 million combined miles in deep space. The spacecraft will have been thoroughly tested, including a crewed reentry on Artemis II. 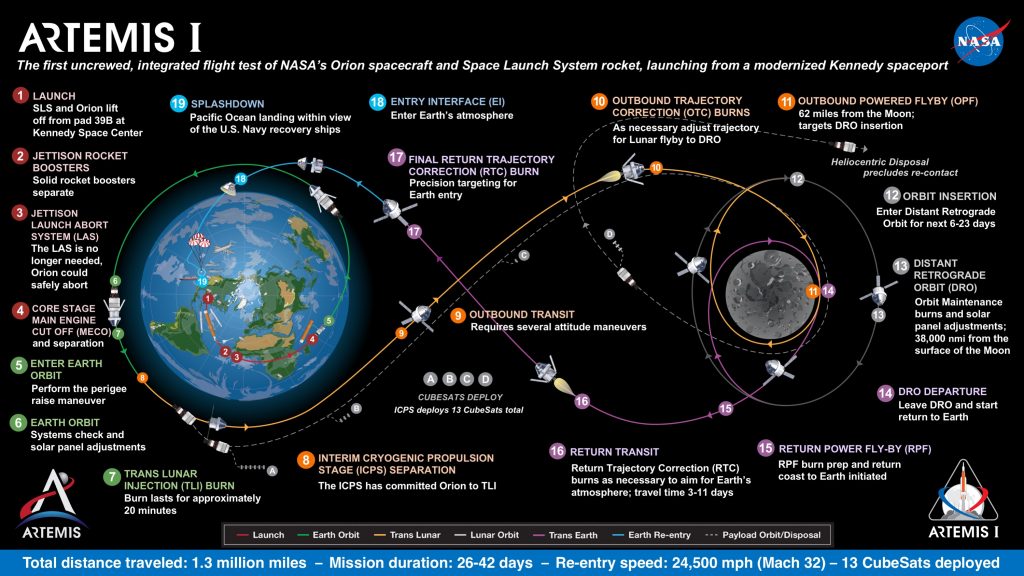 One of the four astronauts aboard Artemis III will be the first woman to walk on the Moon. Another will be the first man to walk on the Moon since Eugene A. Cernan climbed back into the Apollo 17 Lunar Module on December 14, 1972. Unlike in the Apollo program, the Artemis astronauts will descend to the Moon in a lunar lander developed by a commercial partner carrying as much as 220 pounds of science tools and equipment.  Also, unlike the first Apollo astronauts, they will find instruments and science experiments waiting for them, delivered by NASA’s commercial partners in the Commercial Lunar Payload Services (CLPS) program.

NASA is analyzing potential landing sites for Artemis III, looking for a region that maximizes daylight for solar energy production and temperature stability, while also offering access to the permanently shadowed craters that hold water ice. The ideal site would also support communication with Earth and be relatively flat and devoid of boulders to improve landing safety and astronaut mobility.

The astronauts will leave the lander at least twice, and perhaps as many as four times, while on the Moon, examining the geology of the site, collecting rock and core tube samples, conducting science experiments, and performing technology demonstrations. The astronauts will ascend from the Moon in the lunar lander and rendezvous with the orbiting Orion for the return to Earth.

“NASA is building a coalition of partnerships with industry, nations and academia that will help us get to the Moon quickly and sustainably, together. Our work to catalyze the U.S. space economy with public-private partnerships has made it possible to accomplish more than ever before,” Bridenstine wrote.

“Sending human explorers 250,000 miles to the Moon, then 140 million miles to Mars, requires a bold vision, effective program management, funding for modern systems development and mission operations, and support from all corners of our great nation as well as our partners across the globe,” the plan’s authors note.