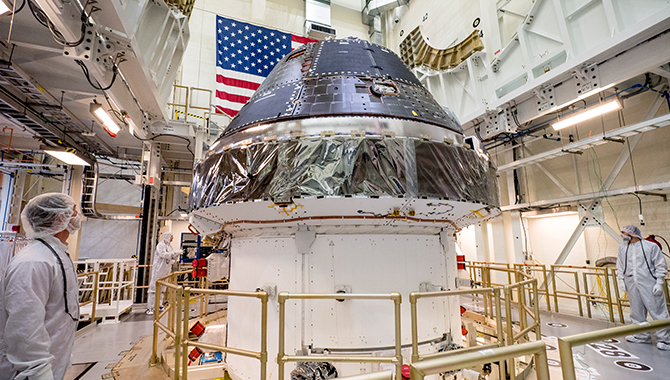 On the 50th anniversary of the Apollo 11 Moon landing, NASA unveiled the completed Orion crew capsule for the Artemis 1 mission.
Credit: NASA

On the 50th anniversary of the “giant leap for mankind,” NASA took another step toward returning to the Moon and on to Mars, unveiling the completed Orion crew module that will embark on the 1.3 million-mile Artemis 1 mission. The module was officially unveiled at Kennedy Space Center (KSC) by Vice President Mike Pence.

This was the end of a journey that began in NASA’s Michoud Assembly Facility in New Orleans, where the module’s main structure, the pressure vessel, was manufactured. The module was then flown aboard NASA’s Aero Spacelines Super Guppy transport aircraft to KSC, where engineers outfitted it with the thousands of components that comprise its state-of-the-art systems and subsystems.

This Crew Module is now being joined with a Service Module that was developed by the European Space Agency (ESA) and built by Airbus in Germany. The Service Module arrived at KSC late last year and will provide Orion’s power and propulsion as it travels through space.

Orion marks a return to the format of a capsule spacecraft launched atop a powerful rocket that NASA utilized for Mercury, Gemini, and Apollo. Orion is by far the largest of the four, with a height of nearly 11 ft and a diameter of 16 and a half feet, yielding an available volume of 316 cubic ft. This compares with the Apollo Command Module, which had a diameter of just 12.8 feet, yielding 218 cubic ft of habitable volume.

This increased size will enable at least four astronauts to travel in the capsule and fits well with NASA’s ambitious plans for Orion, which include supporting a sustained human presence on the Moon and an eventual crewed mission to Mars.

After a heatshield panel is installed on the completed Orion spacecraft, it will be delivered to Glenn Research Center’s Plum Brook Station in Sandusky, Ohio. This 6,400-acre remote test facility is home to the Space Environments Complex, the world’s largest and most powerful space environment simulation chamber. Testing there this fall in the massive 38 ft diameter, 62 ft tall vertical stainless steel vacuum chamber will demonstrate Orion’s performance in a simulated space environment.

Orion will have a gross weight at liftoff of 78,010 pounds, more than double the weight of the Apollo Command Module, which was 32,390 pounds at launch. The Apollo Moon missions were launched on what is still the largest, most powerful rocket ever built, the Saturn V. NASA’s new Space Launch System (SLS), which is being developed to launch Orion into space, will be larger and more powerful than a Saturn V. The SLS is also moving ahead.

The core stage of the SLS, which will be the largest ever built when complete, is being manufactured at Michoud with special equipment. A test article that is structurally identical to the SLS’s almost 70-ft-tall liquid oxygen tank was delivered in late June from the facility to Marshall Space Flight Center in Huntsville, Alabama, where it will undergo structural testing. The tank, one of two propellent tanks for the SLS’s core stage, will be subject to significant stresses, holding nearly 200,000 gallons of liquid oxygen at -297 degrees Fahrenheit at launch.

The day after the tank test article left Michoud, the last of four powerful Aerojet Rocketdyne RS-25 engines for the core stage arrived from Stennis Space Center near Bay St. Louis, Mississippi. The RS-25 is a seasoned rocket engine with a track record of success in the Space Shuttle program. The engines are 14 ft long with a diameter of 8 ft, fueled by liquid hydrogen and liquid oxygen.

When Artemis 1 launches for the Moon, it will be with a configuration of the SLS known as Block 1 Crew, with 8.8 million pounds of maximum thrust available. The RS-25 engines will fire continuously for 8.5 minutes as the SLS lifts the almost 6-million-pound vehicle through Earth’s atmosphere. 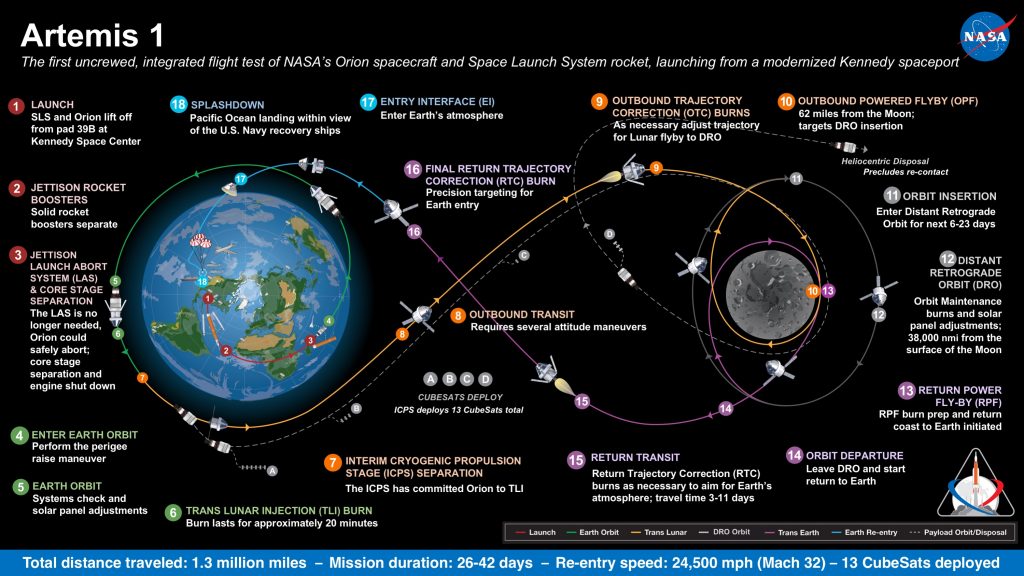 A map of the Artemis 1 mission.
Credit: NASA

Artemis 1 will be an ambitious mission lasting about three weeks and taking Orion 280,000 miles from Earth. The spacecraft will fly without a crew, within about 62 miles of the lunar surface, before entering a retrograde orbit about 38,000 nautical miles from the Moon. After several days of orbiting the Moon, the spacecraft will again come close to the lunar surface for a return power flyby before returning to Earth.

During Artemis 1, the spacecraft will perform attitude corrections, trajectory correction burns and other maneuvers to validate Orion’s performance in space. Orion will splashdown in the Pacific Ocean.

“Similar to the 1960s, we too have an opportunity to take a giant leap forward for all of humanity,” said NASA Administrator Jim Bridenstine, at the module unveiling. “NASA is calling this the Artemis program in honor of Apollo’s twin sister in Greek mythology, the goddess of the Moon. And we are well on our way to getting this done.”