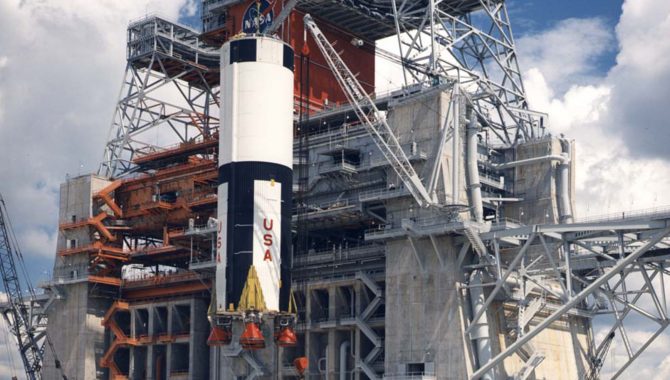 An S-IC is lifted into the B-2 stand from a barge on the East Pearl River, circa 1967.
Credit: NASA

Once again, NASA’s route to the Moon goes through Hancock County, Mississippi.

At Stennis Space Center on the East Pearl River in Hancock County, Mississippi, there is a tower that points the way to the Moon. Standing about 264 ft tall when it was completed in 1966, the B-1/B-2 Test Stand was designed to prove the S-IC stage of the Saturn V rocket, with a mass of 4.4 million pounds and 7.5 million lbf of thrust.

The massive steel and concrete stand was added to the National Register of Historic Places in 1985, along with the nearby, smaller A-1 and A-2 test stands. But it’s far from a museum piece. B-2, which was modified in 1988 to accept the Space Shuttle Main Engine, the Aerojet Rocketdyne RS-25, has just undergone a thorough renovation to once again point the way to the Moon—and ultimately Mars—for the Space Launch System (SLS).

Recently, NASA Administrator Jim Bridenstine announced the agency will conduct a series of tests of the SLS core stage on B-2 in advance of the Artemis 1 lunar mission. The tests are what is known as a “Green Run,” meaning new hardware that is run in tests that will culminate in simultaneous firing of all four RS-25 engines for 8 minutes, just as the core stage will run during a mission.

During the test, the engines will be fed with fuel flowing through the two propellant tanks. The avionics and flight computers will operate the systems as it would during an actual launch. It will be the first time all the components of the complex systems operate together as a unit.

“The SLS core stage is an engineering feat that includes not only the largest rocket propellant tanks ever built but also sophisticated avionics and main propulsion systems,” said Lisa Bates, SLS deputy stages manager, in a NASA press release. “While the rocket is designed to evolve over time for different mission objectives, the core stage design will remain basically the same. The Green Run acceptance test gives NASA the confidence needed to know the new core stage will perform again and again as it is intended.”

The workforce at Stennis has been performing significant upgrades to all areas of stand operations for the past six years. One of the key modifications was repositioning a large structural framework weighing 1.2 million pounds from one side of the stand to the other. An additional 1 million pounds of steel was added to strengthen and extend the stage framework 100 ft higher to accommodate the SLS core. 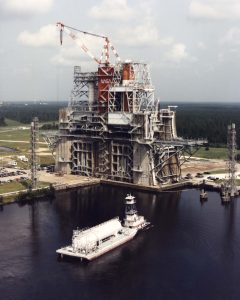 A barge delivers liquid oxygen to the B-1 stand.
Credit: NASA

Workers also upgraded the industrial water system, installing a 160,000 lb valve and new 8 ft diameter piping. The system can now flow an impressive 335,000 gallons per minute at 300 psi. Because the engines are anchored in place to the stand, it is crucial to effectively dissipate the extreme heat that quickly builds in the large flame trench. This torrent of water—enough to fill an Olympic-sized swimming pool in two minutes—cools the exhaust.

A portion of this water will also be used to suppress noise and vibration when the powerful RS-25 engines are firing. Although the remote location of the test stands was selected, in part, to protect surrounding areas from noise during Saturn V testing, and several small towns were relocated during construction to create a buffer zone, the first Saturn V tests reportedly broke a bank window in Picayune, Mississippi, about 12 miles away.

The data, mechanical and propellent piping systems have all been upgraded, as well. The propellent system now has the capacity to pump 100 gallons per minute of liquid nitrogen from onsite storage tanks and delivery trucks for a continuous 24 hours—enough to meet SLS test needs.

The SLS core stage, as the Saturn V was half a century ago, will be loaded onto a barge at NASA’s Michoud Assembly Facility east of New Orleans and travel via canals to the mouth of the Pearl River. During construction of Stennis in 1963, 15 miles of the East Pearl river was dredged to accommodate the Saturn V barge and a massive set of locks was built on 7.5 miles of new canals.

Unlike the Saturn tests, however, the SLS tests will be performed with the actual flight hardware for Artemis 1. Following the testing, NASA plans to examine the core stage, refurbish it as needed, and ship it directly to NASA’s Kennedy Space Center in Florida, where it will be joined with the Orion capsule for launch.

“Green Run is a historic moment for NASA and Stennis for a number of reasons,” said Dr. Richard Gilbrech, Director, Stennis Space Center, in a press release. “For the first time in NASA’s history, a launch vehicle will use flight hardware for its first test, and the Stennis test stands will once again test the core stage for Moon missions.”