Back to Top
Home/INSIGHT/Mission Update: OSIRIS-REx in the Home Stretch 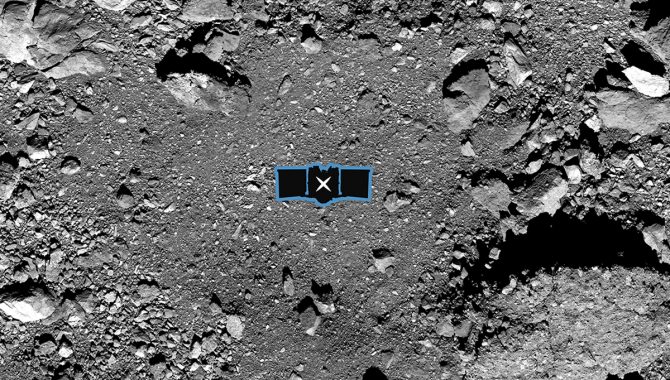 OSIRIS-REx’s primary sample collection site on asteroid Bennu is Nightingale, shown here overlaid with a graphic of the spacecraft to illustrate the scale.
Credit: NASA/Goddard/University of Arizona

Spacecraft on pace to collect asteroid samples later in 2020.

When NASA’s OSIRIS-REx spacecraft was launched from Cape Canaveral atop an Atlas V rocket in September 2016, the mission before the team on the ground was complex and ambitious. The 8 ft.×8 ft.×10.33 ft. spacecraft was to rendezvous with asteroid Bennu, collect material from its surface, and return that sample to Earth. Nearly four years later, the team has overcome a series of challenges—including working remotely because of the COVID-19 pandemic—to reach the home stretch.

Earlier this spring, the team sent OSIRIS-REx to within about 213 ft. of Bennu’s surface to rehearse sample collection process maneuvers and execute what is known as a Checkpoint Burn to pull away. Both of those maneuvers are crucial in the sample collection sequence, which is now scheduled for October 20, 2020.

“The @OSIRISREx team has been demonstrating the very essence of exploration by persevering through unexpected challenges. That spirit has led them to the cusp of securing a sample of an asteroid to bring home to Earth, and I’m very excited to follow them through the home stretch,” tweeted Dr. Thomas Zurbuchen, NASA’s Associate Administrator for the Science Mission Directorate.

During the rehearsal in space, the team deployed the Touch-And-Go Sample Acquisition Mechanism (TAGSAM), an articulated arm about 11 ft. long. They also verified the performance of the spacecraft systems that will be key as OSIRIS-REx descends toward a collection site known as Nightingale.

“This rehearsal let us verify flight system performance during the descent, particularly the autonomous update and execution of the Checkpoint burn,” said Rich Burns, OSIRIS-REx project manager at NASA’s Goddard Space Flight Center in Greenbelt, Maryland, in a NASA press release. “Executing this monumental milestone during this time of national crisis is a testament to the professionalism and focus of our team. It speaks volumes about their ‘can-do’ attitude and hopefully will serve as a bit of good news in these challenging times.” 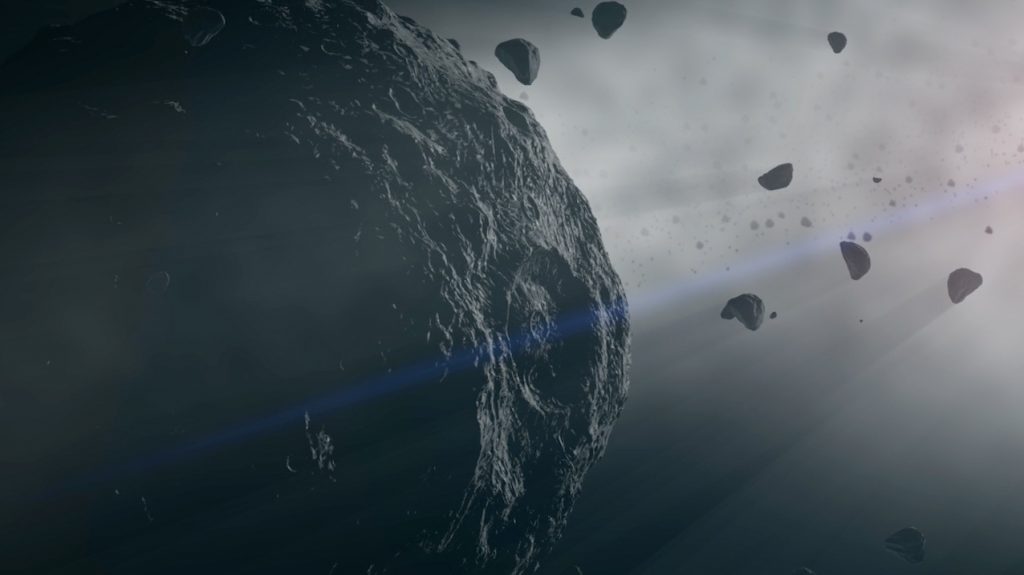 Bennu is the smallest object a NASA spacecraft has ever orbited, and much rockier than pre-mission estimates, which were based on observations from equipment on Earth. Expecting to find large areas of fine-grained material, the original target size for a collection site was 164 ft. in diameter. Unable to find an unobstructed site close to that size, the team chose Nightingale from four candidates. It is about one-tenth the original target size.

“One of the things that surprised us about Bennu was how rocky … it is,” said Dr. Jason Dworkin, project scientist for OSIRIS-REx and a research scientist at the Goddard Space Flight Center. Dworkin was speaking as a guest on the Gravity Assist Podcast, hosted by Jim Green, NASA Chief Scientist. “In our initial model, we figured there would be these large sandy beaches that would make sampling the surface very, very simple.”

“Fortunately, we have an impeccably well-designed spacecraft and a top-notch navigation team. So, we were able to adjust our strategy to find four potential sampleable locations that we can get material from to bring back to Earth,” Dworkin said. The team went through an extensive analysis of the four candidate sites to determine which ones provide the best access for the spacecraft’s TAGSAM, have loose regolith, and are the most valuable scientifically. The site named Nightingale was selected, with Osprey as a backup. All four sites were named after birds found in Egypt. The asteroid Bennu was named after a Phoenix-like bird in Egyptian mythology.

Dworkin described Bennu as a “collection of loose rocks that came from some sort of catastrophic breakup of its original parent body in the asteroid belt.” As a fragment of the ancient solar system, it could help scientists not only learn more about asteroids, but better understand early Earth, as well.

The OSIRIS-REx team will conduct another sample collection rehearsal, currently scheduled for late summer 2020. OSIRIS-REx has the ability to make three sampling attempts. The spacecraft will descend until the sampling arm touches the asteroid’s surface for about five seconds. A blast of pressurized nitrogen will then loosen surface material, which will be collected. OSIRIS-REx is equipped with a Sample Return Capsule (SRC), complete with a heat shield and parachutes, which will return the asteroid sample to Earth, landing in the Utah desert in September 2023.

The OSIRIS-REx team includes the Goddard Space Flight Center, which provides mission management, systems engineering, the University of Arizona, Tucson, which leads the science team and the mission’s science observation planning and data processing, and Lockheed Martin Space in Denver which built the spacecraft and is providing flight operations.