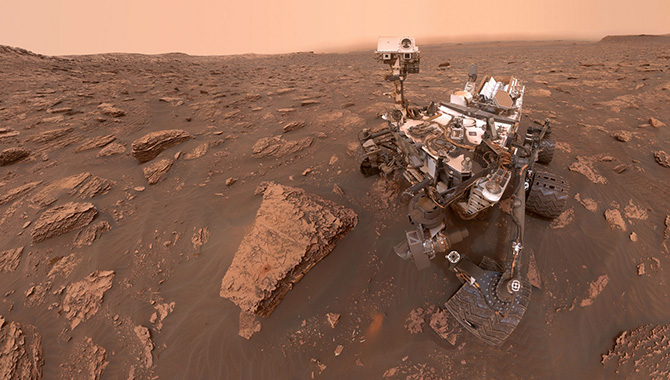 This Curiosity selfie shows the impact of the dust storm on the ground.

Worst dust storm in the history of human observation of Mars presents an unprecedented opportunity to study the critical weather pattern.

Dust storms are an annual occurrence on Mars, with some growing as large as a continent on Earth. Only rarely, however, does one of these storms continue to grow beyond that until it encircles the planet. One such storm began developing in the first days of June and grew throughout the month, leaving much of the planet in darkness.

The storm was so intense it pushed the Opportunity rover, which is solar powered, into a deep sleep to preserve battery life. With many more missions to Mars planned in the decades to come, one of the crucial question for scientists to answer about these storms is why.

Zurek explained that as a dust storm expands, the atmosphere on Mars absorbs more sunlight. This produces a powerful feedback effect, in which the heating changes temperatures and pressures. Those forces drive winds and create favorable conditions for dust raising in surrounding regions.

The current dust storm, which first became a cause of concern on May 30, engulfed the planet in dust by late June. NASA scientist watched as dust filled Perseverance Valley, where the long-lived rover Opportunity was conducting research missions. The storm’s opacity, or tau, reached an incredible 10.8 on June 10.

“That is a record on Mars. It’s completely dark,” said John Callas, speaking in the teleconference. Callas is the project manager of NASA’s Mars Exploration Rover project.

Opportunity’s solar power generation dropped precipitously as the storm intensified, from more than 650 watt-hours in early May to just 22 on June 10. “I made the decision to declare a spacecraft emergency, because there wasn’t enough energy for the rover to sustain activity,” Callas recalled.

This is a pivotal moment for Opportunity, which was launched on July 7, 2003 and landed on January 25, 2004. The mission, planned for just 90 sols (days on Mars), is now in its 15th year. The rover has already weathered a large dust storm in 2007, but the opacity then was much less.

Opportunity is likely in a power fault mode, Callas explained, where it wakes daily at noon, checks for available sunlight to generate power, then returns to sleep if the storm is still obscuring the sky. The last step is a clock fault mode, in which the rover would wake briefly every four hours. The difficulty with this is it leaves a much wider range of times for the NASA team to seek out a signal from the rover.

“So, we’re concerned, but we’re hopeful that the storm will clear, and the rover will begin to communicate with us,” Callas said. One cause for the team’s optimism is that although Opportunity’s batteries have been through more than 5,000 charge/discharge cycles, they retain 85 percent of their original capacity.

“They are, really, the finest batteries in the solar system,” Callas said. Another cause for hope is that this storm comes during summer, when the night temperatures should remain a relatively balmy -33 C or warmer at night.

As the Opportunity drama plays out, the storm presents a rare opportunity to collect research data on one of the biggest, densest dust events that humans have ever observed on Mars.

“We are fortunate that we have a record number of operational spacecraft at Mars, enabling us to observe the storm from many different perspectives,” said Dave Lavery, program executive at NASA Headquarters for the Opportunity and Curiosity rovers. “Knowing and understanding how these storms behave will be critically important for our more ambitious missions that are being planned for the future, such as a Mars sample return, which is envisioned to be solar powered.”

Scientists are eager to gather and analyze data from this dust storm because that is a crucial step in being able to test theories about why these large storms form, and to develop models. Eventually, scientist would like to develop the tools needed to forecast when atmospheric conditions are likely to produce a large dust event.

“This would be like forecasting El Nino events on earth or the severity of hurricane seasons. There are ideas about how to do this, but we need data to test and refine them,” Zurek said.

To learn more about the rovers and orbiters at Mars during this storm, click here.