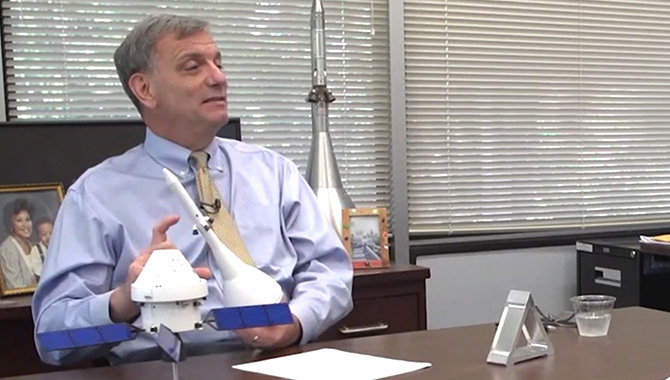 The program manager of Orion discusses the project’s challenges and lessons learned in our Virtual Project Management Challenge.

As program manager for Orion, Mark Kirasich oversees the development and testing of America’s next generation spacecraft, an incredibly complex program that pushes the boundaries of science, engineering, and materials. Orion will redefine space travel, taking humans farther than they have ever gone, eventually to Mars.

Still, in a Virtual Project Management Challenge (VPMC) presented by APPEL Knowledge Services on July 26, 2018, Kirasich noted that managing the program has more in common with managing a smaller project than many people might realize. For instance, he notes, all project managers face similar pressures from finite financial resources and schedules.

“You never really have as much as you’d like,” Kirasich told host Ramien Pierre during the VPMC, available online here. “And really that’s almost by design. You want to invest whatever money is available, whatever schedule is available, into making the spacecraft as good as possible, giving it as much performance as possible. The interesting thing that all [project managers] might tell you is, ‘It’s hard to manage the budget, manage the schedule.’ You never have as many resources as you would like.”

“You write requirements, you talk about what is it that [you] want to do, and you codify that in requirements, you manufacture, you build, you go through testing, you get to flight, and then you learn from it. That’s very similar,” Kirasich said. 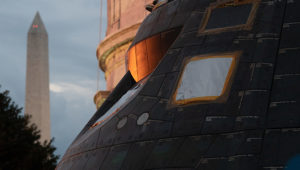 NASA’s Orion spacecraft that flew Exploration Flight Test-1 on Dec. 5, 2014, in advance of being moved to the White House complex in July 21, 2018.
Credit: NASA/Joel Kowsky

Although some elements of the Orion program would be familiar to any NASA program manager, the sheer scope and duration of the project make it significantly different. The program, formalized in 2006, has seen the focus change dramatically from a way to resupply the International Space Station as the Shuttle Program ended to a spacecraft for deep space exploration.

Orion comprises a crew module with 316 cubic feet of habitable space, topped by a launch abort system, both riding atop a service module being designed by the European Space Agency (ESA). Orion will launch atop the new Space Launch System. Orion will be instrumental in building a Deep Space Gateway, a space port that will be placed in a stable orbit around the moon.

“This orbit around the moon is actually a great jumping off point, depending on where you want to go next,” Kirasich said, noting that these missions will inspire people, especially young people, to do great things.

“They are going to see people doing things that have ever been done before, and it’s going to motivate [them] in engineering and science,” he added.

Additionally, because Orion pushes the limits of technology and materials as the team strives to make the spacecraft stronger and lighter, the program will benefit life on Earth. “The technology that we have to develop in Orion will then trickle down and have applications in other industries and make everyday life here on Earth better, just as Apollo really did that 40 years ago,” Kirasich said.

The international partnership with ESA, coupled with the involvement of 10 NASA centers during some years of the development, adds complexity to managing program. Kirasich noted that many of the skills—setting goals, clear communications, flexibility, decision making—from his first leadership course at NASA are an effective guide today in leading the program.

“The European Space Agency is an incredible space agency, who has accomplished many things in space that, in fact, we haven’t,” Kirasich said. “They have incredible talent. They have had amazing successes, as have we. What you find when you bring the two organizations together is the cultural differences.” These differences can be viewed as an opportunity to identify the strengths and the best practices of each organization to make an overall stronger partnership, Kirasich said.

“It takes time and effort to work through that,” he said. “It’s not just international. Orion is a multi-center project. And people here at Johnson, we have our own culture. And we work with people from across the agency, from Kennedy, from Marshall. With those interfaces, you establish a good relationship and you work through the different things.”

The team has more hardware and software in manufacturing plants, assembly plants, or test labs than ever before and it working to an important test of the launch abort system in April 2019. This system is designed to lift the capsule and astronauts safely away from the rocket in the event of an emergency.

“Most of the things that I do today to keep our team in sync, I learned early in my career as part of my first leadership course – basic management 101. It’s really the same set of principles you learn. Keep the project moving forward despite setbacks. There are always going to be problems. That’s part of being a program manager.”

Browse the archives of past VPMC sessions