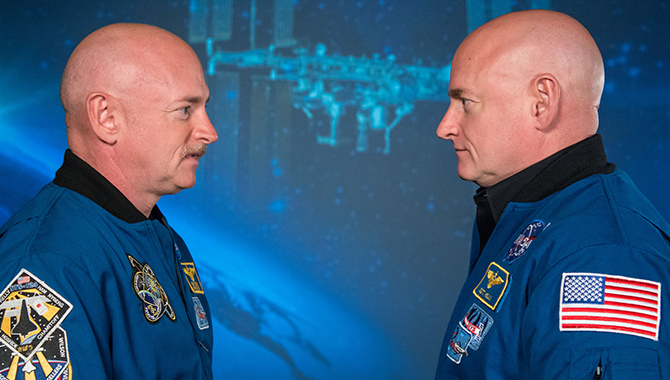 Mark Kelly (left) and twin brother Scott participated in a comprehensive study of the effects of an extended spaceflight on the human body.
Credit: NASA

Twins Study Provides Fascinating Insight into the Effects of Spaceflight on the Human Body.

From the earliest days of the U.S space program, the effects of weightlessness, radiation and isolation on astronauts have been key topics of research. It’s easy to forget, as we near the 50th anniversary of the Apollo 11 Moon landing, that early in the space program some scientists held serious reservations about the ability of humans to perform even basic tasks in space. The effects of weightlessness on the body were very much an open question.

For instance, when John Glenn became the first American to orbit the Earth on Mercury-Atlas 6, there was an eye chart on the instrument capsule for him to read every 20 minutes to gauge if microgravity was causing his eyesight to change. It wasn’t known then, either, if the human digestive system would function in space.

Today, as NASA drives toward a future that includes a Lunar Gateway, a long-term return to the Moon by 2024 and a mission to Mars beyond that, the effects of space on the human body are again in sharp focus. Astronaut Scott Kelly currently holds the record for the longest spaceflight by an American at 340.4 days. Future missions are likely to be much longer.

Because Scott Kelly has an identical twin brother, retired astronaut Mark Kelly, his extended space flight presented research teams an unprecedented opportunity. By gathering a total of 183 blood samples from Scott and Mark, 10 teams were able to study the effects of space flight on the human body on a genomic and physiological level, comparing the changes to a nearly identical control subject on Earth.

The results were published recently in the journal Science, as an integrated paper comprising the results of all 10 teams. NASA held a teleconference on April 9 to publicize those results and discuss how they suggest future research topics.

At that teleconference, Steven Platts, Ph.D., NASA Human Research Program deputy chief scientist, said that more than 750 hours of research were conducted, contributing to what is perhaps the most comprehensive and integrative study done on the topic.

The research found that Scott Kelly experienced an array of changes during his prolonged spaceflight. None of the changes significantly impacted his overall health and the majority of the changes reversed when he returned to Earth. Still, with NASA and others planning for longer flights and extended stays in deep space, researchers agree that they merit further investigation.

His carotid artery, for instance thickened, as did his retinas. On Earth, both of those are markers for disease. Is space, however, researchers are unclear what they signify.

“In space we have no idea what that means,” Platts said in a recent episode of Houston We Have A Podcast.

During Kelly’s year-long mission aboard the orbiting laboratory, his participation in science wasn’t limited to the one-year mission investigations. He also worked on some of the almost 400 science studies that were ongoing during his year in space, helping NASA reach for new heights, reveal the unknown and benefit all of humanity.
Credit: NASA

Other changes Scott Kelly experienced—his body mass dropped seven percent, his bone breakdown and reformation cycle increased, his microbiome altered—are likely at least partially related to the changes in diet and exercise that are required of astronauts in the International Space Station.

Some changes were surprising. His telomeres—protective ends on strands of DNA—lengthened during his time is space. This is surprising because on Earth, telomeres tend to shorten as humans age, and as a result of stress. Most of the telomeres returned to their pre-mission length when Kelly returned to Earth, but some shortened, a potential cause for concern.

Researchers noted changes in Scott Kelly’s DNA and genetic expression, as well. Most of these changes in genetic expression reverted to preflight levels following the mission, but about 9 percent lasted beyond six months. Many of the changes appear to be related to stress and give scientists future research topics.

Both Scott and Mark Kelly participated in the teleconference, with Scott sharing his firsthand experiences of mission stress and his adaptations to space and then to gravity upon his return to Earth. He returned to Earth in a Soyuz capsule, an experience he likened to “going over Niagara Falls in a barrel, but while you’re on fire. Soon as you realize you’re not going to die: Most fun you’ve had in your life.”

Scott Kelly has flown four space flights, noting that his physical reactions to the longest mission were much more dramatic than the shorter ones.

“It was significantly different than how I felt after six months. I mean, not even in the same ballpark at all. And it seems to me, having flown a flight of a week, two weeks, 159 days, and 340 days, how I felt after the mission … probably tracked along the same lines as the duration,” Kelly said.

“So, my flight was twice as long. I felt absolutely twice as bad, maybe even … five times as bad,” he added.

Upon his return to Earth, Kelly experienced joint pain, muscle pain and extreme swelling in his legs. He developed contact rashes and hives anyplace his body experienced significant pressure, such as while sitting. He likened the first week of his return to having the flu, marked by nausea and dizziness. In all, it took him six to eight months to recover.

The research breaks new ground in the study of the human body in space and points to fascinating new research questions.

“I call it a pathfinder mission, because really this is the first time we ever tried to do, you know, real genetics in space,” Platts said. “And, this study taught us how to do it. And for the future, I mean, it just opened up everything for the future.”